The milestone sale will be held at the Muchea Livestock Centre on Friday, December 10.

The milestone sale will be held at the Muchea Livestock Centre on Friday, December 10, commencing at 11am and will feature an excellent yarding of 1000 well-bred and grown beef calves from long-time regular sale vendors and vendors more recent to the fixture.

On offer will be 550 steers and 450 heifers from the Peel and Central Midlands/Wheatbelt regions, which will range in age from seven to 10 months and represent a cross-section of British and European breeds and crosses.

Another feature is the strong numbers of excellent quality heifers that would make ideal candidates for future breeding duties.

The sale will again incorporate the WA Charolais Society's Feature Sale and Show with Charolais and Charolais infused calves nominated and with $3200 in cash and prizes up for grabs thanks to the generosity of sponsors.

S & C Livestock manager Phil Petricevich said it was hard to believe 20 years ago they held their first sale with 400 cattle at the now defunct Waroona saleyards.

"The sale has grown into one of the most prestigious sales on the weaner sale calendar, regularly yarding more than 1000 head," Mr Petricevich said.

"The great season has resulted in some outstanding drafts of cattle and, in particular, the quality of Angus heifers is very exciting.

"Any producer looking for quality lines of future breeders couldn't help but be impressed with what's on offer this year."

The Parkin family, Bolinda Vale Grazing, will contribute the largest draft of calves to the yarding with 250 mixed sex calves from their Keysbrook property.

The draft will consist of mainly Angus and Angus-Hereford cross and Charolais cross calves.

The Bolinda Vale calves were drenched with Dectomax, vaccinated with 7in1 and received Cobalife at marking and are estimated to weigh from 300 to 400 kilograms.

Mr Petricevich said the Bolinda Vale calves are an outstanding line of Charolais and Angus cross cattle to be presented by a long-time client. The March-April drop calves will have been yard weaned a minimum of 10 days prior to the sale and have been vaccinated with 7in1, received B12 and Multimin injections at marking and Beachport Liquid Minerals at weaning.

The calves are sired by Blackrock and Sheron Farms Angus bulls and Kalinya Blonde d'Aquitaine bulls.

The draft will comprise about 65 per cent Angus and 35pc Murray Grey-Blonde and are expected to weigh between 300-400kg.

The Manning family has expanded its herd to 300 breeders with Kelly Manning's fiancée Ben Smart joining the family operation. The family's self-replacing Murray Grey-Angus-Charolais cross females are mated to Monterey Angus bulls for their first two calvings with subsequent joinings to Kooyong Charolais bulls and the best heifers kept for herd replacements.

The March-April drop calves are expected to weigh from 320-400kg and were drenched with Dectomax at marking and treated with Arrest Easy Dose in mid-November. 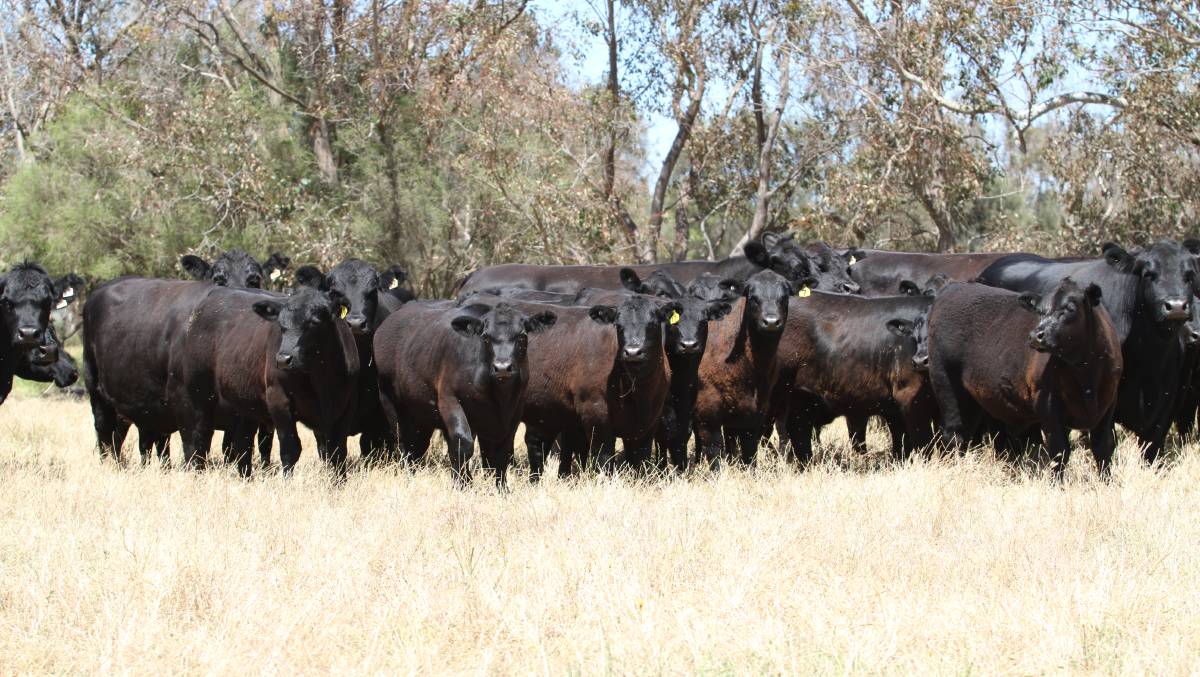 Some of the 52 mixed sex March-April drop Angus calves to be offered by Mardella vendors Peter and Margaret Bates, JH & JM Bates.

The March-April drop draft will consist of 28 steers and 24 heifers bred on Blue Ribbon Angus bloodlines and are expected to weigh from 260 to 400kg.

The Bates finished milking cows in 2015 and commenced their beef enterprise with Angus cross cows from the Kelliher Brothers, Wandering and Blue Ribbon Angus females.

Mr Petricevich said the Bates select for moderate frame, high growth and quiet temperament and, with the outstanding season, this year's calves never wanted for anything. Inspecting a mob of the 100 mixed sex Angus weaners aged seven to nine months to be offered by Deepdale Farm, Toodyay, were S & C Livestock manager Phil Petricevich (left) and Deepdale Farm manager Rob Oremek. Deepdale Farm will offer heifers which would normally be retained for its own herd, providing an excellent opportunity for buyers to obtain young replacement breeders.

The March-May drop calves were sired by Ardcairnie, Blue Ribbon and Gandy Angus bulls and are estimated to weigh from 250-370kg and will be weaned for a minimum of 10 days.

Featuring in the Deepdale Farm draft are heifers normally retained for their own herd replacements which will provide an excellent opportunity for buyers to obtain young replacement breeders.

The operation takes a holistic approach to farming with no drenching required for the past five years based on extensive faecal worm egg counts.

Mr Petricevich said the Deepdale Farm cattle were very hardy as they run on the banks of the Avon River and he recommended inspection.

Nominations for the sale are still open.