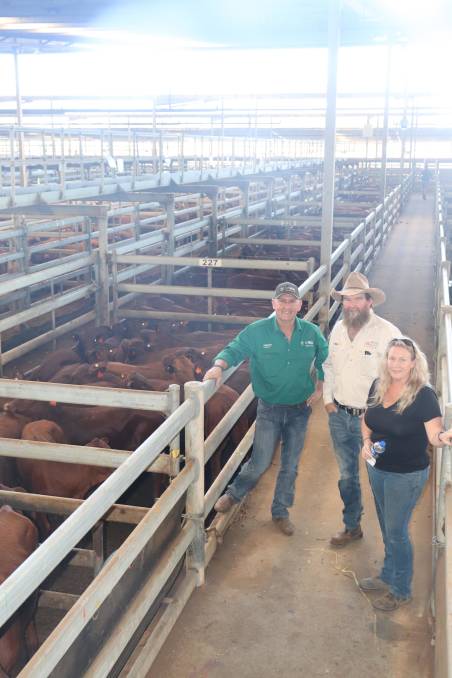 Craig Walker (left), Nutrien Livestock, Mid-West and Wheatbelt and vendors Liam and Penny Johns, Killara station, Meekatharra. Killara Pastoral topped the overall and pastoral sale with their Santa Gertrudis-Droughtmaster cross cattle achieving top price for a line of bulls at 850 cents a kilogram and a line of heifers 815c/kg.

THE heat did not deter buyers from bidding up at Nutrien Livestock's record breaking store cattle sale at the Muchea Livestock Centre last month.

"It was the largest single yarding of auction cattle that Wesfarmers/Landmark/Nutrien has transacted," Mr Giglia said.

"It was a massive team effort, with long hours put in.

"The logistics of pulling together a sale that exceeded the capacity of the yards was definitely helped by the large lines."

Mr Giglia said it was an outstanding result for all involved, with quality livestock on offer, great purchases and great returns.

"The market was extremely well received because of the quality of the stock and our vendors need to be commended on that," Mr Giglia said.

There was interest from the Eastern States and strong pressure from local buyers seeing the total of 3309 cattle, consisting of local and pastoral lines of steers, heifers, bulls and PTIC heifers and cows, make good values across the board.

The cattle travelled from the south west through to Paraburdoo in the north and with numbers being almost smack on the figures advertised, the resulting clearances and prices were a clear reflection of both the quality on offer and the beef market.

The sale was again interfaced with AuctionsPlus and much of the interstate demand was driven from the online platform.

The lines of pastoral cattle were keenly sought after, with the bulls and lighter weight heifers selling to the highest prices, with the lighter weight local heifer and steer drafts also making the top prices in those categories. The 27 young bulls averaged 137 kilograms and were knocked down to Delaney Livestock Services.

A pen of 29 bulls, also from Killara Pastoral, also purchased by Delaney Livestock Services, came in at second top in the bull offering realising 740c/kg.

Among the local bull drafts, a pen of 17 Angus bulls, presented by Robert Mostert, Mostert Grazing, Keysbrook, reached a 550c/kg high and were snapped up by Bassem Dabbah Livestock Exports.

A total of 449 bulls were yarded, with Killara Pastoral making up a good portion of this with its 170 on offer.

Killara Pastoral featured robustly, with its prices being as dominant as their numbers.

The Johns achieved outstanding prices for their drafts of 170 bulls and 160 heifers. "We have got to be happy with the results and the sale certainly got exciting for everyone once we got into the bulls," Mr Johns said.

He said he knew the cattle had been selling quite well and they had received a fair bit of enquiry about the cattle, but he did not expect the results they achieved on the day.

"We sold quite a few of the same style of cattle earlier in the year, but we did not expect them to do as well as they did, they were well above expectations, that is for sure," Mr Johns said.

"When we found out we were part of the biggest yarding, we weren't sure how well they would go.

"But we were certainly happy in the end, it was great."

The Killara cattle were between eight and 10-months-old and came off one of their sub-leases, Butta, where the season has been quite dry, hence the lighter weights.

"I think people were chasing these because they are a good mix of Santa Gertrudis and Droughtmaster bloodlines and make good weight gains," Mr Johns said.

The sale trend towards the lighter weights showed the buyers' willingness to purchase stock they can build up themselves.

Following this trend the top price in the local heifer drafts went to a line of 30 heifers, presented by the Cockmans' Tebco Fishing Co, Dongara, averaging 263kg and realising 732c/kg, for an average of $1924/head.

The line sold to Yanchep Sun City, which went on to purchase several of the Tebco Fishing Co heifer lines.

Tebco Fishing Co entered a total of 180 Angus heifers and 240 Angus steers in the sale.

Among their steer drafts, a line of 32 averaging 215kg, made the top overall price for steers at 748c/kg, averaging $1610/head, with the steers also knocked down to Yanchep Sun City.

Tebco Fishing Co's Jeff Cockman said they were very happy with the result, not just for themselves, but for all the vendors. Badgingarra buyers Will Laurisson (left) and Bruce Kilgour were interested in the selection of PTIC females offered at the end of the sale. Mr Laurisson was successful on four lots from Middalya station, Minilya, paying from $1850 to $2250 a head.

"It was a great sale and all the cattle looked fantastic," Mr Cockman said.

"It was good to see buyers willing to pay such high prices, knowing they were getting quality cattle."

The Cockmans are flat out harvesting at their property in Dongara and Jeff and father Terry took the time off to attend the sale, as it would be their last with these cattle.

"I knew it was going to be a special sale, not just because of the record yarding," Mr Cockman said.

"But also because we have the farm on the market, we are looking at a new venture, so this will be the last big sale we will have, for at least a few years.

"It was great to see the buyer turnout and the competitive bidding."

The final lines to go under the hammer were the 244 PTIC females.

In the pastoral PTIC females the top price was a line of 15 Middalya station, Droughtmaster heifers, averaging 302kg, that sold to JS & GL Laurisson, Badgingarra, for $2250 a head. Nutrien Livestock trainee Austin Gerhardy (left) and buyer Michael Harwood, Oldbury Equine Vet. Mr Harwood was chasing some local steers and heifers for grazing the excess pasture he has on a property.

NUTRIEN Livestock sale co-ordinator, auctioneer and AuctionsPlus level one assessor Simon Green said it was an outstanding sale on which to end the year.

"It was the largest single yarding of auction cattle in the history of Wesfarmers/Landmark/Nutrien," Mr Green said.

"The quality and breeding of the pastoral cattle reaped the rewards this time.

"The drafting of all the separate categories of cattle covering both local and pastoral lines of steers, heifers, bulls and pregnancy tested cattle, helped with the market holding its own - but also took an enormous effort to prepare for and is a credit to the vendors and the entire Nutrien Livestock team."

He added the marketing of the cattle by the Nutrien team leading up to the sale was second to none, which also contributed to the day's success.

"In addition to the crowd at the yards on the day, there were seven active bidders, with five successful purchasers on AuctionsPlus, with 73 lots sold and 590 online bids made during the sale and 1927 catalogue views prior to the sale."

There were 37 vendors and of these Mr Green said 19 were return vendors who had previously sold in Nutrien special sales earlier in the year.

He said that Nutrien's next store cattle sale would be held on January 14, 2022.

"The sales will be held on the fourth Friday of every month as a new routine," he said.