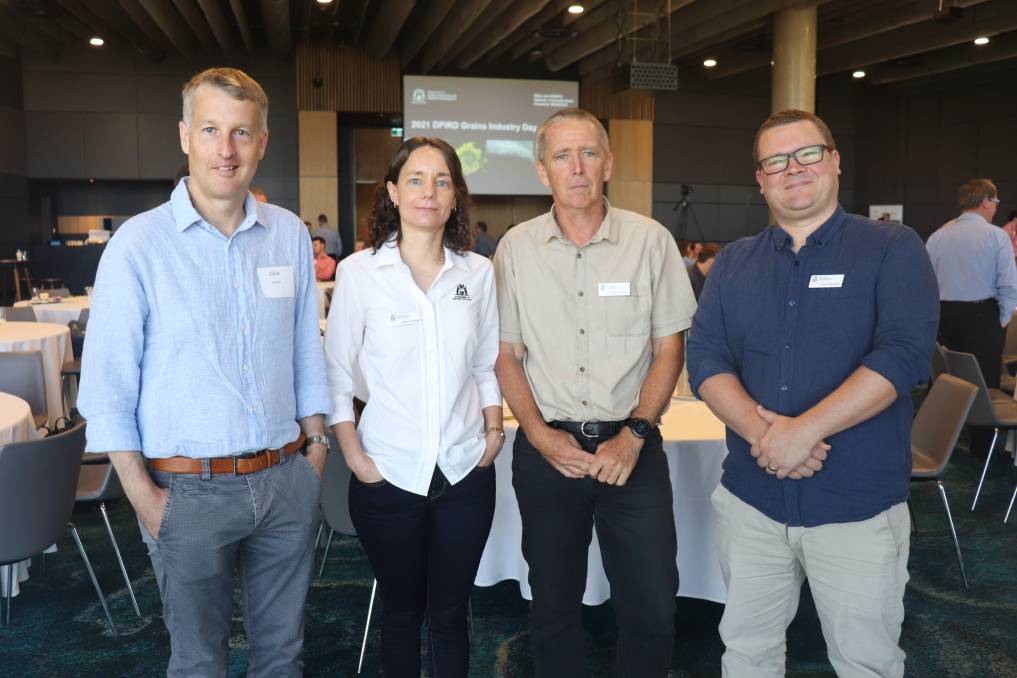 Speaking at the Department of Primary Industries and Regional Development (DPIRD) Grain Industry Day, held at Optus Stadium last Tuesday, four experts in their fields provided information on what can be learned from the wet year.

IF WA growers can agree on one thing, it's that this year was wetter than usual.

Above-average rainfall over the vast majority of the graingrowing region was welcomed by most and, undoubtedly, helped boost yields.

But it also caused issues not often seen, including problems with pests, weeds and diseases that growers might not be used to dealing with.

Speaking at the Department of Primary Industries and Regional Development (DPIRD) Grain Industry Day, held at Optus Stadium last Tuesday, four experts in their fields provided information on what can be learned from the wet year.

According to DPIRD development officer Dusty Severtson, conditions in autumn were warm and moist which favoured locusts hatching.

"Growers had to protect their crops from Australian plague locust (APL) where numbers of the pest were concerning," Mr Severtson said.

"There were spring hatchings, from winter diapause eggs, that started hatching in late August due to the warm and moist conditions, while the cooler areas further south started hatching later.

"There was a risk to crops before harvest, however that was mostly late sown paddocks and in pastures."

When it comes to APL next year, green vegetation is necessary for nymph and adult survival, adult migration and egg development.

APL numbers are set to depend on feed availability in the lead up to egg laying in early summer as egg and embryo development is halted by dry spells.

The heavy rain in the north east pastoral areas in early March triggered early migrations of native budworms into the northern and eastern grainbelt.

"The many rainfall events during the season, sometimes with heavy winds as well as cooler than normal temperatures for parts of the grainbelt, meant that major pests diamondback moth and native budworm did not develop into numbers requiring widespread spraying," Mr Severtson said.

"The low numbers of caterpillars, and often aphids, in crops in spring could be attributed to these environmental conditions as well as predators, parasidoids and insect-specific fungus which can develop in consistently moist canopies."

While the wetter than usual conditions provided good knockdown opportunities at the start of the year, a lot of growers were not prepared for the early emergence.

At times it was difficult for them to get enough herbicide on time as people had not planned for a double knock.

DPIRD research scientist Catherine Borger said that due to cold and wet conditions, some later sown crops had trouble emerging after a double knock.

"It was often impossible to spray in-crop with people getting bogged and there were not enough aerial spraying options available, all of which will likely cause a weed blow out," Dr Borger said.

Looking to next season, cooler temperatures and high moisture levels are likely to increase weed seed production and seed size, as well as increase seed dormancy.

"Large seed size will create weed seedlings with good early vigour, while the staggered weed emergence can be expected due to that seed dormancy," Dr Borger said.

"Growers need to plan for healthy weeds as well as for in-crop/late season control."

An updated Weed Seed Wizard model is available for free on the DPIRD website and allows growers to use it to look at summer weed growth, such as caltrop and marshmallow, as well as in-crop control, such as herbicides and harvest weed seed control options.

The 2021 season was characterised by early sowing opportunities, good early crop growth and dense and early closing canopies in many crops which predisposed them for some diseases.

Lupin sclerotinia was commonly seen in lupin crops in the northern agricultural region.

In a survey of 26 commercial lupin crops in the Geraldton zone, all had some level of sclerotinia and although there were not always large amounts, it was detectable in all crops surveyed.

That included sclerotinia sclerotiorum in 100 per cent of crops surveyed, 85pc with basal (ground level) infection and 88pc with main spike pod infection.

"Something that was more common than in previous years was the basal infection symptom which was quite widespread and caused early death of plants in crops," Mr Thomas said.

"A DPIRD-led, Grains Research and Development Corporation (GRDC) project will be looking into impact and management, both agronomic and chemical, of sclerotinia in lupin as well as getting a better understanding of the infection processes in lupin."

It was also a year with a green bridge leading into the season.

Leaf and stem rust were detected in wild oats indicating that conditions were favourable for rusts and some oat crops were sprayed.

"Disease in wheat developed later and while it was not necessarily damaging, it did result in a build up of inoculum and if there is a wet summer autumn that could be an issue for 2022," Mr Thomas said.

"There were also the first reports of stripe rust for several years, which was interesting to note and a warning for the future.

"However, no new pathotypes were detected in the multiple samples of all rusts that DPIRD sent to The University of Sydney for pathotype testing."

While the biomass above the ground was quite obvious this year due to the large crops, it's important to remember that it also means more biomass below the ground.

"Crown rot survives in stubble from previous years in cereal crops and will also survive in volunteers and grass weeds," Dr Hberli said.

"With the start of the season there was plenty of rain to go around and the wet season really favoured the infection process.

"This year, with the good rain that also led to good crops with more biomass, there were more chances for the different tillers to get infected and leave a lot more inoculum for next year."

The other issue with a lot of water, as there was this season, is that root lesion nematodes and other pathogens can move around the paddock.

While crown rot is fairly widespread across WA, it is particularly pronounced in the low rainfall zone, but also certainly in stubble in the southern areas.

"Looking into 2022, there are potentially a lot of paddocks with a fair amount of inoculum of different pathogens and nematode pests," Dr Hberli said.

"If a cereal or another susceptible crop is planted and the environment aligns with the pathogen, then growers could potentially run into a lot of disease in 2022."