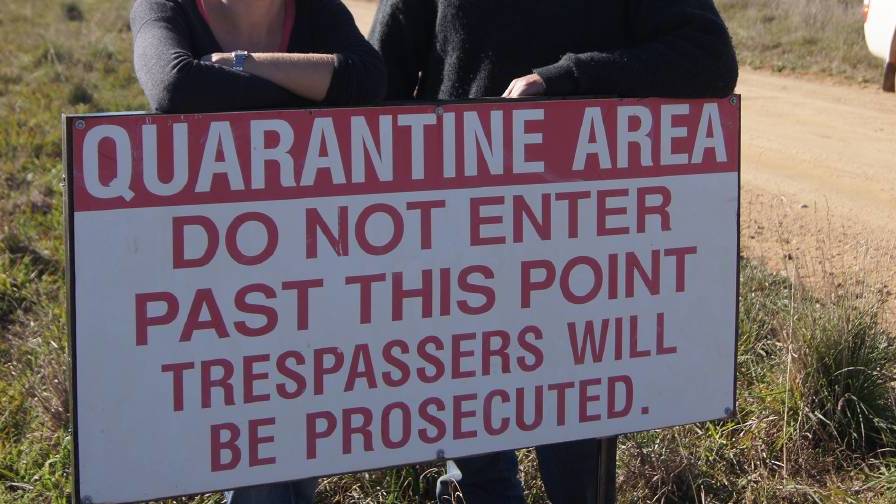 Agricultural Region MP Steve Martin believed that if the Attorney General gets his way, farmers will only be protected if animal welfare inspectors are granted extra powers to enter food production premises.

LABOR Attorney General John Quigley has failed to deliver on his promise to toughen laws against animal activists trespassing on Western Australian farms.

Mr Quigley is all talk when it comes to action on this issue.

Remember how important this issue was a couple of years ago?

"When these no-gooders trespass... the farmers want those persons permanently banned,'' Mr Quigley said in March.

Mr Quigley made these remarks in March 2019.

Mr Quigley's apparent enthusiasm for the issue followed months of high-profile protests by activists at farms, abattoirs and feedlots across Australia.

Eight people were charged with trespassing onto WA farms in 2019, with most receiving a fine and some recording a conviction.

Mr Quigley said that was not enough to deter people from reoffending.

The human headline was quick to respond - at least when there was a microphone in front of his face.

"I don't know what the mushy-headed vegans think, or why they think, but they better get this through their mushy heads: that we're changing the law in a substantial way that spells trouble, big trouble, for anyone who goes trespassing on agricultural land with the intention of disrupting agricultural production," he told reporters in May 2019.

And there is a sting in the tail for the agriculture sector when the government finally gets around to fixing the trespass problem.

If the Attorney General gets his way, farmers will only be protected if animal welfare inspectors are granted extra powers to enter food production premises.

"That silly circle has got to be broken by statutory force to allow inspectors to go in and that will obviate the need for trespassers to go in and take secret footage," Mr Quigley said.

Mr Quigley's logic is that activists wouldn't be acting if farmers were behaving responsibly.

That is a slight on the industry.

If Labor wanted the 'mushy headed vegans' sorted, they would be sorted.

The Animal Welfare and Trespass Legislation Amendment Bill was introduced into the Legislative Assembly earlier this year but doesn't appear to be a government priority.

Apart from COVID-19, what have been the priorities of the State government in 2021?

The government has focused on COVID-19 and WA has been basically free of the virus for more than 18 months with our mining and agriculture sectors driving the national economy.

I've been surprised at our willingness to be shut off from friends, family, and business associates in other States and overseas, but it's hard to argue that we have lived our lives, albeit isolated, in a more 'normal' fashion than anywhere else in the world.

But let's take a closer look at what the McGowan Labor government decided to make a priority this year.

Cutting the number of regional members of Parliament was "not on the agenda" a few months ago, but soon become top of the list when Premier Mark McGowan got his feet back under the plush desk at Dumas House for a second term.

Mr McGowan and Mr Quigley decided that the long-held Labor dream of 'one-vote one-value' should be first order of business in their new term.

Despite claims of 'fairness' from Upper House Labor MPs in fierce agreement with the move, the likely result will be fewer MPs representing regional WA in the State Parliament at subsequent elections.

Other priorities of the McGowan government have included the Dog Amendment (Stop Puppy Farming) Bill 2021 - solving the urgent issue of too many cute pooches swarming the pet shops in the Christmas shopping blitz.

And the Ticket Scalping Bill 2021 was urgently passed just in time for the AFL Grand Final when those Victorians from the Western Bulldogs and Melbourne Demons played off for the big prize at Optus Stadium, Perth.

What still didn't make the Premier's urgent list, despite Mr Quigley's promises, was a strong response to animal activists trespassing on WA farms.

Over two years ago Labor said, "People have a right to protest, but breaking the law and trespassing are unacceptable.

"The McGowan government strongly supports WA farmers, who support our economy and are responsible for thousands of WA jobs."