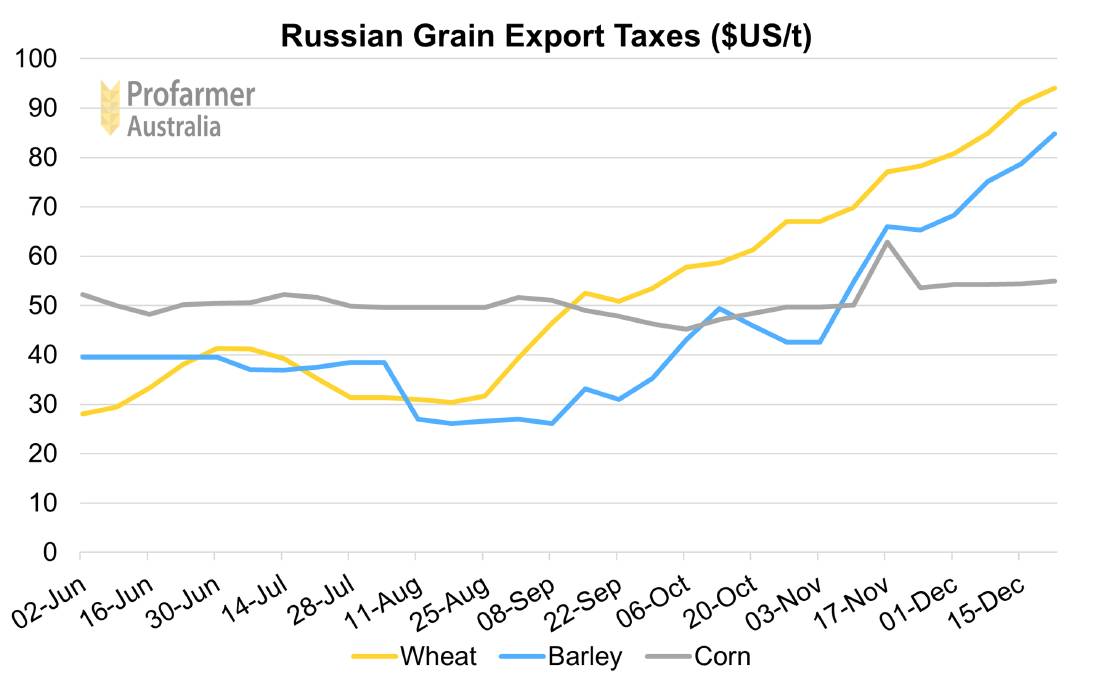 Looking back at 2021 grain market influences

AS we come to the end of 2021, we look back at what influenced grain markets throughout the year.

A record Australian winter crop, poor production in Canada/United States and Russian export duties are a few factors we will review.

Coming off a reasonably large cropping season in 2020, it was a nice surprise to get another bumper year in 2021.

Above average rainfall across most of the country helped to boost root zone soil moisture and aid crop development.

However, it is the confluence of record national winter crop production and in some cases record prices that has made 2021 one for the record books.

Meanwhile wheat, especially higher protein grades, have surged to well over $400/t in some port zones and even barley prices have held strong surpassing $300/t at one point.

While the usual selling pressure has weighed on values during the harvest period, prices are still well above average in most cases which demonstrates the demand for Australian origin grain.

Overall, 2021 has been an excellent year for the grains industry because strong demand has driven up prices despite a large crop.

Soaring Australian grain prices have been a product of poor production and in turn lower exports from our major export competitors.

Dry conditions in Canada this year saw canola production at only 12.6mmt, compared to an average of 20mmt.

This meant reduced Canadian exports of less than 6mmt, versus an average of 10mmt.

Australia with its large production is well positioned to fill this export deficit and is why we have seen record prices this year.

Therefore, national production of over 6mmt this year is very high, especially with WA alone producing half of this.

Reduced wheat production in the northern hemisphere has increased demand for Australian wheat with exports for 2021/22 estimated at 25mmt.

Canada has had its lowest wheat production since 2007 with only 21.7mmt produced, down 38.5 per cent year-on-year.

The US also had poor production with 23mmt of wheat exports expected compared to 27mmt the year prior.

Russian production was around 75mmt compared to 85mmt last year which is impacting exports as is the tax that has been imposed.

Therefore, constrained exports from other major exporting countries have played in Australia's favour.

Reduced exports out of Russia are a product of lower production and restrictions on exports to stabilise domestic prices.

Since June, Russia has imposed a floating export duty on wheat, barley, and corn.

The Russian Ministry of Agriculture has proposed an 8mmt wheat quota from Feb 15 to June 30 which would further limit exports.

Overall, this is a positive for Australian graingrowers as strong demand will last into next year as northern hemisphere production prospects are unknown for 2022/23.

Low global stocks and time until the northern hemisphere winter crops come out of dormancy means demand should stay strong into the new year for Australian grain.

A production shock in the Black Sea region, the European Union or the United States will provide price support to Australian values.

East coast prices will continue to be influenced by domestic demand and price premiums for higher protein will remain as a greater portion of the crop is downgraded to feed due to harvest rainfall.