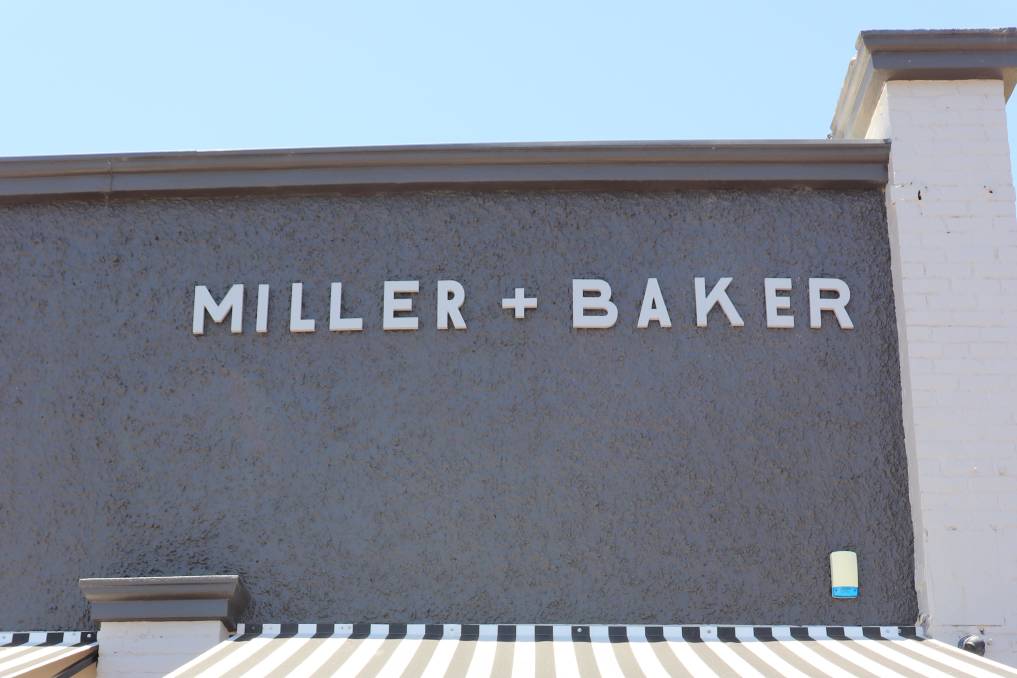 Mark and Rachel Taylor started Miller + Baker after being inspired by the healthy delicious bread they ate in Copenhagen.

When you find a bakery that will mill its own flour using the grain straight from a local farm in regional Western Australia, then the bread just tastes so much sweeter.

THERE'S nothing quite like taking that first bite into a freshly baked, still slightly warm loaf of bread, butter oozing, light, textured and delicious.

When you find a bakery that will mill its own flour using the grain straight from a local farm in regional Western Australia, then the bread just tastes so much sweeter.

That's just the case at local Perth bakery, Miller + Baker, owned by Mark and Rachel Taylor, who have mastered the art of the perfect loaf of bread.

From start to finish, the Taylor's know exactly what's in each loaf of bread.

Using Mace or the red wheat Halberd, grain is grown at Mollerin by Ian and Di Haggerty. Halberd is a red wheat variety, which rose to popularity in the 70s. It is the key ingredient for the flour milled by the Taylors.

The Taylors then mill their own flour in a granite stone mill at the back of the Lake Street café, providing complete control over the whole process.

Hailing from England, Mr Taylor met Rachel on a surfing trip to Australia in 1995 and has a background in environmental science.

Ms Taylor grew up on a mixed livestock and cropping farm at Tardun, and as they travelled back and forth between Europe and Australia, a love for simple food and the desire to know where our food comes from connected them further.

Throughout their travels, they found they gravitated towards simple bakeries with good quality products, especially bread.

"We spent most of our time in Europe visiting bakeries,'' Ms Taylor said,

"We would bypass all the museums and art galleries and just go to bakeries.

"You just end up going to them to eat nice simple food, if you find a good one then it's just a nice bit of bread, that's what I really like, it was just so simple," Mr Taylor said.

Although they already had a love for baked goods, the journey to create a delicious farm to table product for themselves began after a three and a half year stint in Copenhagen, Denmark.

After being introduced to the incredible, organic local bread that seemed to be bursting with more flavour than either of them had tasted before, Mr Taylor was motivated to learn the art of breadmaking and bring this process to Australia.

"It's just three ingredients and if you know where it comes from then that's just ideal to me," he said.

Backed by an investor, Mr Taylor set about finding the perfect site and was introduced to Di and Ian Haggarty through a contact at a small business course.

"We were put in contact with four or five farmers, all of them were quite keen, but Di and Ian were the ones that really wanted to make it work and were interested in getting their grain into bread, they were so accommodating," he said. 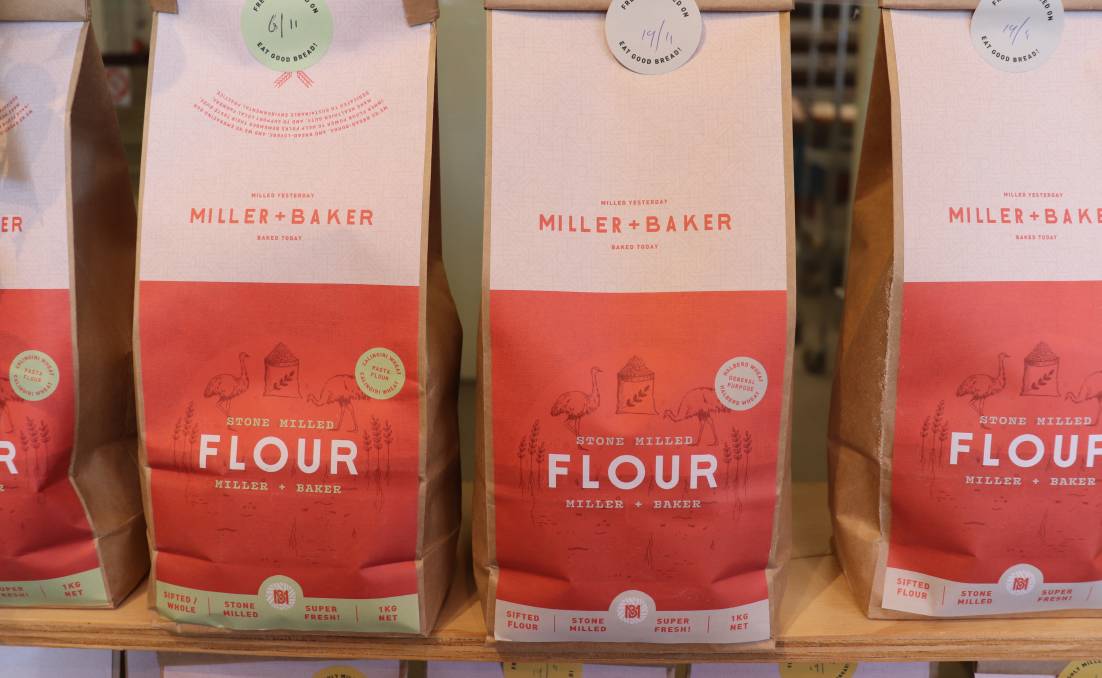 The final product. The flour is available for purchase from the café front.

A vital part of the process, the farmers they worked with needed to be as passionate about the end product as the Taylors were, as well as being organic or regenerative farmers.

"Rethinking what we're putting in our food and our bread is really important," Ms Taylor said.

"I went off eating bread for a while, like a lot of people and then returned to it after being in Copenhagen because the product there is so healthy, tasty and delicious.

"When we wanted to bring it back here, we knew that to get that healthy product you need to know how the grain was grown and what the soil was like and start from there.

"Then the process in between, stone milling followed by the sourdough process - you have to be in control of the whole thing in order to know the end result, a really beautiful and healthy product."

The Haggertys fit the brief as regenerative farmers with 26,000 hectares across Mollerin and Wyalkatchem.

Originally starting as conventional farmers, Di and Ian Haggerty started asking questions about the way things were done as the land they farmed on was prone to compaction, wind erosion, and poor rooting depth.

In order to improve the land they started looking into soil health and as a by-product, the human health link.

"One of the first people we spoke to in regards to improving the soil, had a real strong lean towards human health," Ms Haggerty said.

"So as well as looking at the food outcomes, we started looking at soil microbiology, and how it linked to the food you grow.

"We embarked on that journey 20 years ago, and kept learning and trying different things."

While they still use chemicals on some parts of the farm, they find that the microbes are now so healthy and function efficiently that they detox the soil, and prevent things from growing that shouldn't.

They use chemicals only when required and at minimal amounts, so that the end grain product has no chemical residue in it, something that they regularly test.

"We do whatever we can to get away from practices that might disrupt the microbes, we want them to do their job as best as possible," Ms Haggerty said.

Part of their process uses worm liquid, buying in compost as well as using their own composting system known as a Johnson-Su.

Grain sifts through and into the granite slabs for milling below.

The Johnson-Su is a static compost that is aerated at the same time.

Using barley straw and manure collected from under the shearing shed, it helps them cut down on their waste as well as put the right nutrients back into the soil.

"It's really exciting to see you can grow a crop that can match a conventional crop without a lot of nitrogen on, just with compost, it's quite mind blowing," Ms Haggerty said.

"We've got some phenomenal crops out there this year that have grown just on this stuff and not on great country either, we've got some good parts but we've also got some really sad country."

Trialling the Halberd variety, a red wheat, on their property with great success, there were early signs that this grain would produce a tasty loaf.

With the sheep at the Haggerty farm, often making a bee line for the more tasty and full-flavoured red grain.

"Originally Di didn't think that the grain varieties would matter, and mentioned that the soil health will be the biggest driver," Ms Taylor said.

"But they planted the older grain anyway, and noticed how the sheep loved to return to the Halberd, so I think that was an early sign of it's flavour."

Halberd is a grain not widely grown in Australia.

Finding popularity in the 1970s, it was phased out during the 1980s in favour of higher-yielding varieties.

It is a taller growing wheat, with a longer root system, and a red tinge to the head.

Customers can buy the milled Halberd wheat for themselves, and try their hand at making a sourdough, something Ms Taylor noticed a huge spike in over COVID-19 pandemic. Mr Taylor monitors the process, ensuring the end result is exactly as he would like it.

"COVID surprisingly affected us positively, with everyone working from home, it allowed us to get to know customers in the area a lot more quickly," she said.

"Then everyone wanted to try making sourdough during the initial lockdown, when you couldn't buy flour in the supermarket, so people would come here to buy it.

"It's become a real community around the bakery which has been lovely."

The stone milling of the grains is also another crucial step in making a wonderful end product.

Using two granite slabs, grain with a moisture content of around 14 per cent is fed into the machine.

A big belt wheel turns the top stone, with adjustable settings that allow you to choose how far apart the slabs are, producing whole wheat flour or sifted flour.

"With stone milling you can't get rid of the good stuff, you could sift out some of the bran and germ, but you've still got the natural oils," Mr Taylor said.

"Even though it would be great for everyone to have 100pc whole-wheat flour, you probably wouldn't sell much bread.

"So we still use our sifted flour but it's a creamy white flour."

Ms Taylor said it was not bleached, so there was still a lot of colour in their bread from the oils and things.

Currently the Taylors receive three tonnes of grain from the Haggartys every six weeks, selling their pancake mix to Dirty Clean Food, some flour to local restaurants, some in their shop front and the rest in the daily baked bread and pastries.

The Taylors are hopeful to grow the stockists of their flour, making chemical free, locally grown flour available to more Western Australians.

"Traceability is going to become more important, and I'd like to get in some more interesting varieties for people to buy," Mr Taylor said.

"There are older varieties, more taste driven ones that I'd like to use.

"Plus Ian and Di are doing such a great job, I'd love to support them and sell more of the wonderful grain they grow."