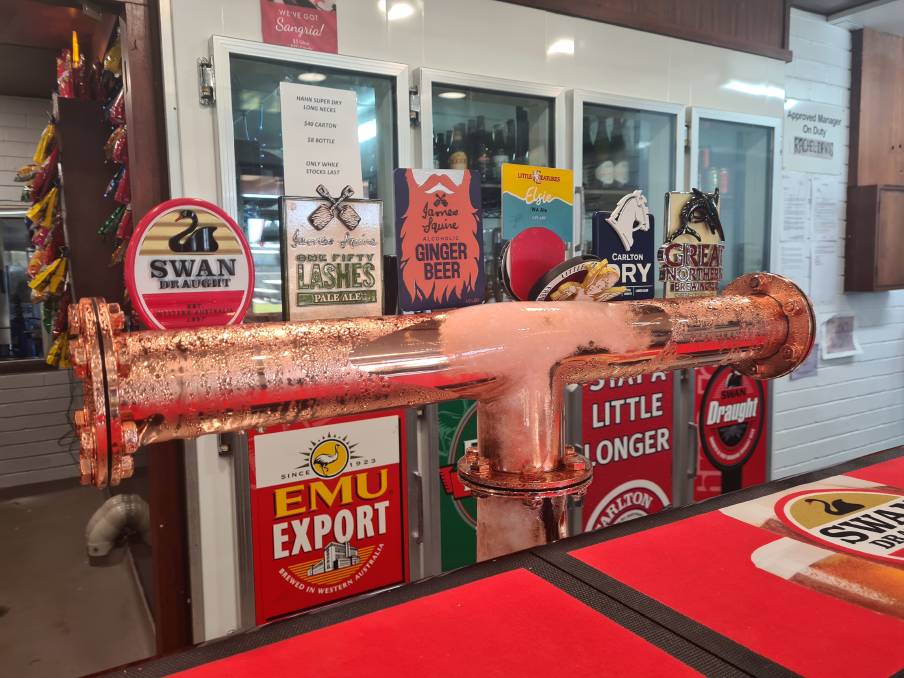 The Nabawa Valley Tavern in the Shire of Chapman Valley reopened in September after being closed since 2018.

Simply calling the venue a tavern would be a gross understatement, given the work that has been put in to make it appealing to the entire community.

That's what publicans Kristina Drage and Scott Simister wanted to give to the people of the Shire of Chapman Valley when they reopened the Nabawa Valley Tavern.

The tavern had been not just the local watering hole but an institution since it opened in 1973.

Then, out of the blue, the owners sold it and shut up shop in 2018, with the pub going on the market where it waited for three years.

During that time, locals in the Chapman Valley area had to travel over 25 minutes to Northampton or Geraldton for a beer.

To Ms Drage and Mr Simister, who also own and run the Freemasons Hotel and the Murchison Tavern in Geraldton, that was simply not acceptable.

"We've noticed that people come in and they know everyone, so they sit around and chat and catch up, that's the exact environment we wanted to create," Ms Drage said.

"We wanted to create an environment where nanna would feel comfortable walking in here by herself while she waited for her friends, but also where every day blokes want to come to have a good time and there's not many licenced places where you can have both."

The duo, who have been business partners for about nine years, bought the tavern in June and after three months of extensive renovations, opened it to much fanfare in early September.

Having been closed for a few years, the venue itself was really run down and it probably would have been easier if Ms Drage and Mr Simister knocked the whole place down and started again. 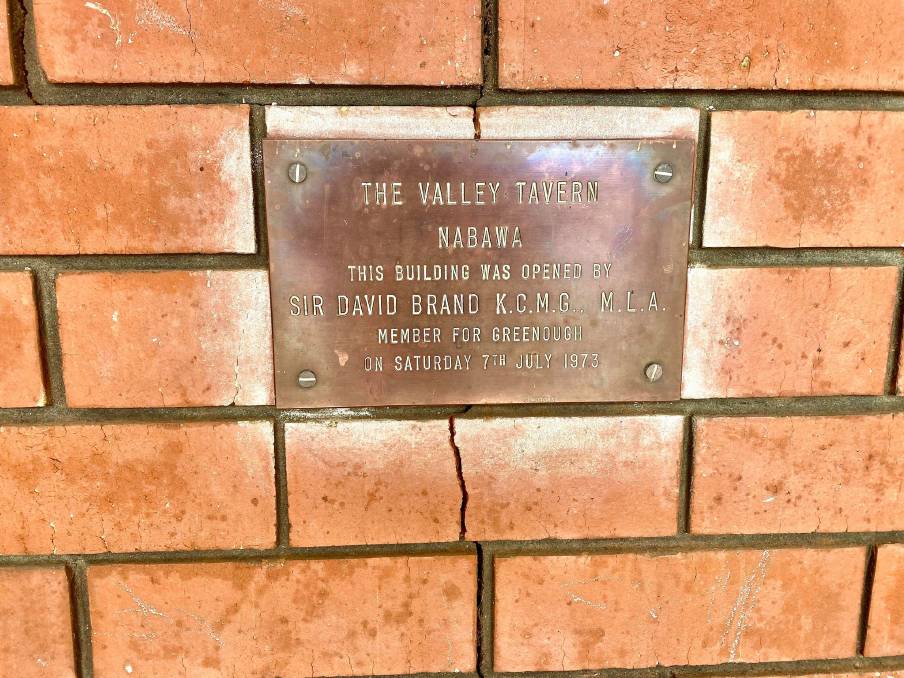 The Nabara Valley Tavern had been not just the local watering hole but an institution since it opened in 1973.

But they didn't do that for a couple of reasons.

Partly because they bought just after ex-Tropical Cyclone Seroja, so there was no chance they could get it built, but mainly because there was a lot of sentimental attachment to the pub.

While they may have renovated, they wanted to keep the things that would remind the locals of their wedding day, their bucks night, or their 50th birthday.

It looks new, it smells new, but it still has that old nostalgia and soul to it that the locals love.

"We really didn't know what to expect until one day, just after we announced the opening date, we saw a blackboard sign that someone had written 'thank you' on," Ms Drage said.

"It gave us goosebumps and it made us realise that we were about to embark on something really special.

"We felt a lot of pressure in that we didn't want to disappoint anyone, but so far the community has been sensational and the people of Chapman Valley are simply superb."

For Ms Drage and Ms Simister, the Nabawa Valley Tavern is a long-term plan.

They have both been in the hospitality game for a long time and are both really busy.

At the start of the COVID-19 pandemic, they looked at their situation and realised they couldn't continue to work at that pace forever, but that they'd also always want to have a finger in the pie.

They decided that owning something a bit more remote would mean that when they're ready to tone everything down now, they could sell the pubs in Geraldton and keep the Nabawa Valley Tavern as their passion project.

"Hospitality isn't a job, it's a lifestyle and once you become a true restaurateur or a publican it's just who you are," Ms Drage said.

"You run on the adrenaline, you run on the satisfaction of seeing happy customers and creating an environment where they come in and leave in a better mood than when they arrived.

"It's an extremely tough industry - there are so many compliance agencies that we're answerable to, staff and customers are hard work, in fact it's all really hard work, but when you get it right, it's so worth it." 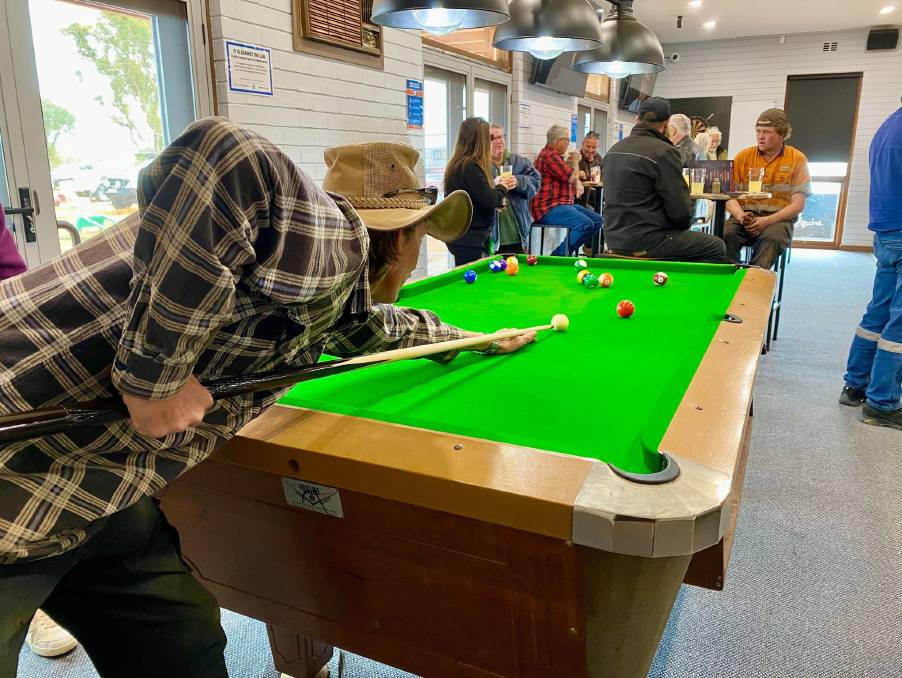 The venue has been a hit with the locals who are stoked they no longer have to travel 25 minutes to get a beer.

Simply calling the venue a tavern would be a gross understatement, given the work that has been put in to make it appealing to the entire community.

That starts with the beer garden out the back which is without a doubt the most appealing part of the pub.

There are games for the kids, the sprinkler is turned on for them to play in when it's hot and the sunsets are breathtaking.

Then there is the coffee shop which officially opened at the end of November, providing caffeinated necessities to locals and passersby alike.

Lastly, there's the shop, which is a first for a very long time for the Chapman Valley community.

It has the basics - toilet paper, nappies, two minute noodles and the like.

But it means locals don't have to drive all the way into Geraldton late at night when they realise they're out of dishwashing liquid and have a sink full of dirty dishes to contend with.

"We've opened with a bang, it's been sensational," Ms Drage said.

"I've realised that one millimetre of rain during harvest equals five pints sold, so we've been smashed on a few occasions.

"During the day we have a lot of older people that come out from Geraldton to have lunch or use the coffee shop.

"Not everyone's life revolves around beer.

"We want kids to finish school and be able to come in and buy a chocolate from the shop, or for mums to come in and have a coffee with their girlfriends.

"Before this, you couldn't even buy a bottle of water in town, so we want them to be able to get any basics that they need and to be able to cater for everybody." 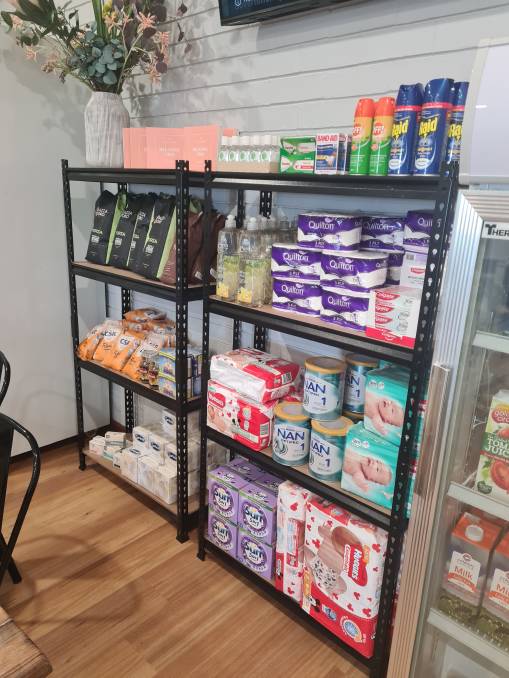 The tavern also includes a café and small shop that stocks the basic necessities.

While it may already be more than just a pub, Ms Drage and Mr Simister still have further plans for the future and ideas of how to turn it into more of a tourist attraction.

In the new year that includes plans to deck the front area to make it look more appealing.

A wedding at the venue is also set for 2022, something they're hoping will become more popular as the beer garden is stunning and there is a beautiful, big tree to have the ceremony under.

The ultimate highlight will be the addition of accommodation out the back, something that will require a lot of work and a lot of time, but ultimately make the Nabawa Valley Tavern a must-stop location on a trip up north.