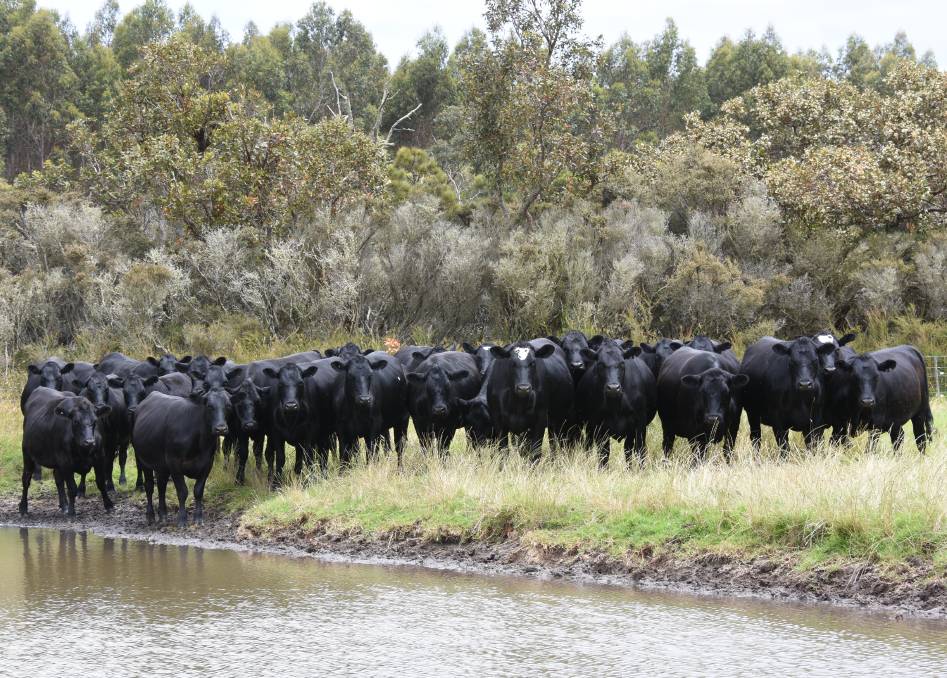 The biggest offering of PTIC first-cross heifers will come from the Houden family, The Southden Trust (Houden Pty Ltd), Redmond. The family will offer 50 PTIC Angus-Friesian heifers which are sired by Arizona Farms Angus bulls bred from Coonamble Angus bloodlines. They are in calf to Quanden Springs Angus bulls selected for their calving ease and high growth.

More than 660 breeders will go under the hammer from well-known cattle herds in the Great Southern and Esperance region and the offering will include mated beef heifers, mated first-cross heifers and mated cows.

A TOP class offering of females will be on the agenda when Nutrien Livestock hosts its annual Great Southern Blue Ribbon Breeders sale at the Mount Barker Regional Saleyards on Tuesday, January 18.

In the sale, which commences at 11am, more than 660 breeders will go under the hammer from well-known cattle herds in the Great Southern and Esperance region and the offering will include mated beef heifers, mated first-cross heifers and mated cows.

A couple of genuine herd dispersal and reductions will also be in the offering.

Nutrien Livestock southern livestock manager Bob Pumphrey said the quality of the females on offer was absolutely outstanding and would present a fantastic opportunity for producers looking to top up on quality breeders.

"All the females set to be offered are going to present extremely well.

"It is certainly a very good line-up of well-bred cattle, which will also feature a herd reduction and the completion of a herd dispersal, which have many years of breeding behind them.

"The sale will start with a good run of mated beef heifers which are mainly Angus and Angus cross and then move into the mated mature-aged breeders.

"It will be an outstanding yarding of Angus and Angus cross heifers.

"A lot of the lines on offer have tight calving periods and the majority come from very good breeding herds.

"With the quality of the females on offer, the sale will certainly provide a great opportunity for producers given where the cull cow market is sitting to replace their older breeders with some outstanding, younger females."

In terms of pregnancy status, buyers can buy with confidence as all the mated heifers and cows are pregnancy tested in calf or are under a vendor guarantee of pregnancy.

A feature of the line-up will be the two Angus herd dispersal/reductions for the Rochester family, K & M Farming, Manypeaks, and the Foulds family, Pasaz Enterprises, Hopetoun. 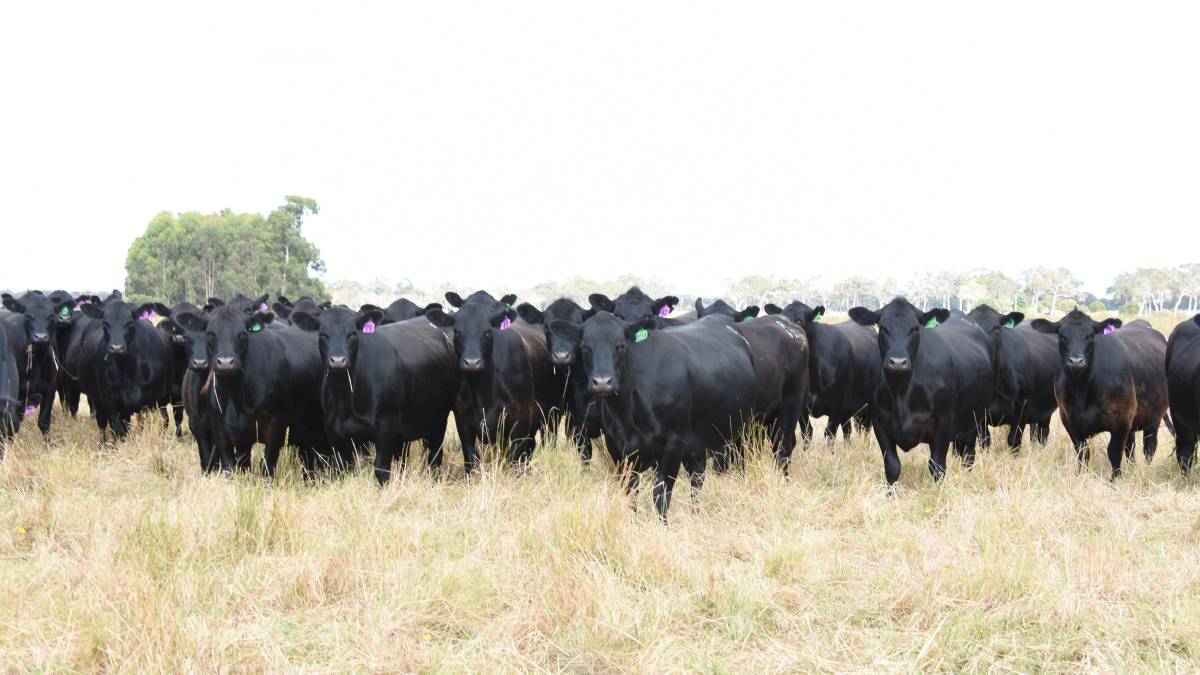 The Rochesters will offer 100 Angus breeders as part of a final stage herd dispersal as they move their enterprise away from breeding towards contract backgrounding and grass feeding.

The family's offering will consist of 60 rising two-year-old heifers and 40 rising second calvers.

The Rochesters' herd was originally based on Diamond Tree, Coonamble and Koojan Hills Angus bloodlines but in the past few years it has been using bulls from their own K.T.M registered stud.

The heifers in the offering were synchronised AI joined to PCC Farra Fortune and are due to calve on February 19 and 20.

"We used him last year as well over 70 heifers and didn't have any calving issues," Mr Rochester said.

The second calvers are PTIC to the Rochesters' own K.T.M bulls and are due to calve from February 19 to April 1.

The Foulds family will offer 100 Angus cows as part of a genuine herd reduction. 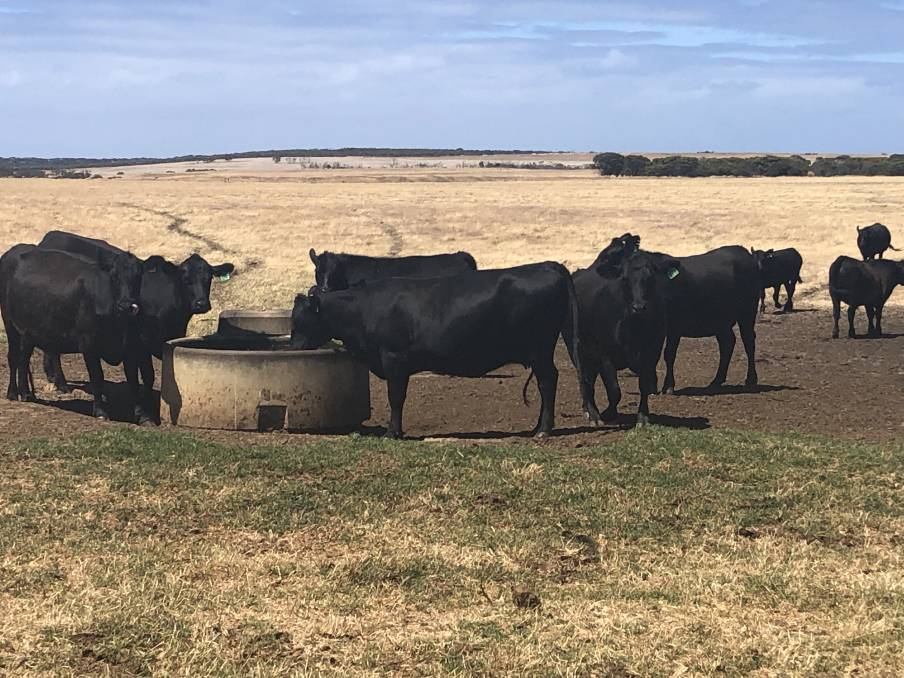 An example of the three-year-old, second calvers which will be offered by the Foulds family, Pasaz Enterprises, Hopetoun, as part of a herd reduction sale. All up the family will offer 100 PTIC Angus cows based on pure Coonamble breeding and ranging in age from three years to seven-years-old.

The cows are based on pure Coonamble breeding and range in age from three years to seven-years-old.

They have all been joined to Coonamble bulls and are due to calve from March 10 to June 1.

Mr Pumphrey said the females on offer from the Foulds family were very well bred and had been mated back to high quality Coonamble sires.

In the mated heifer offering, purebred Angus heifers will make up the biggest percentage of the yarding.

Leading the charge in terms of numbers in these pens will be long-time sale vendors the Forbes family, Dundeal Holdings, Narrikup, who will have the largest draft of mated heifers on offer in the sale. 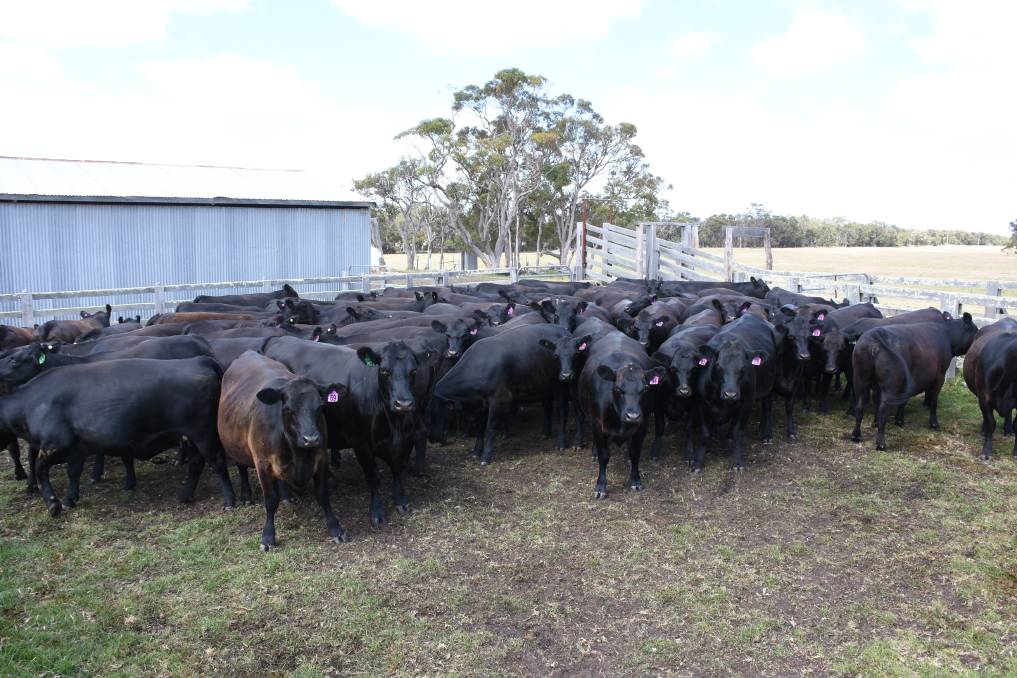 Long-time sale vendors the Forbes family, Dundeal Holdings, Narrikup, will also be the largest vendors in the sale when they offer 195 PTIC Angus heifers. The majority of these are based on Coonamble Angus bloodlines.

The Forbes family has nominated 195 Angus heifers and most of these are based on Coonamble Angus bloodlines.

The majority of the heifers the Forbes will offer were purchased in as weaners last season from regular suppliers then joined and prepared especially for this sale.

Both lines are PTIC to low birthweight Angus bulls purchased from local South Coast studs and are due to calve from March 2 to May 6.

All the heifers on offer from the Forbes family will have been pregnancy tested twice prior to the sale, with the second test being undertaken on January 10.

The next biggest line of mated heifes will come from the Gravestocks family, B & K Gravestocks, Esperance, when they truck more than 65 Angus heifers.

The 22mo heifers were all purchased from reputable local Esperance Angus breeders and joined and prepared especially with this sale in mind.

Nutrien Livestock, Esperance agent Darren Chatley said the heifers on offer from the Gravestocks were well-grown and nice Angus-type females.

The Gravestocks' heifers are PTIC to Blackrock and Allegria Park Angus bulls and are due to calve from March 14 to May 2.

Regular sale vendors the Smith family, Baboo Pastoral, Green Range, will also offer one of the bigger drafts of mated Angus heifers in the sale, when they present 40 purebred, owner-bred PTIC Angus heifers. 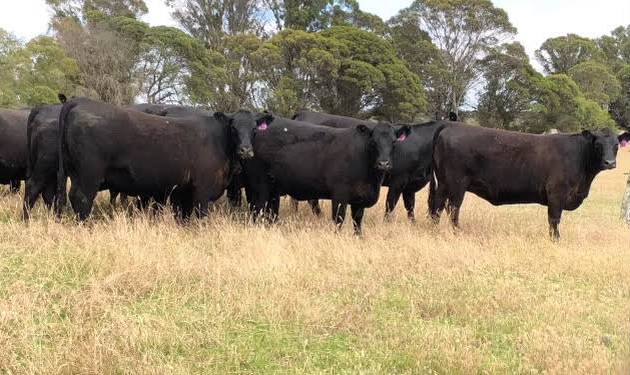 The Baboo Pastoral heifers, which are 20-22mo, are based on Coonamble Angus bloodlines.

"They are of exceptional quality and are also very quiet," Mr Pearce said.

The heifers are in calf to low birthweight Coonamble Angus bulls with Coonamble Hector parentage and are due calves from March 2 to May 6.

The line has received Pestigard, Bovillis and Ultravac 7in1 vaccinations and were pregnancy tested on December 20.

Nanarup-based operation MI & DM Twentyman is also on the vendors' list with an offering of 28 PTIC Angus heifers.

The 24mo heifers are carrying Koojan Hills Angus sired calves and are set to calve from March 11 to May 13.

Coming in from the Redmond area will be 20 purebred PTIC Angus heifers from the Gatti family, L & C Gatti.

The line of owner-bred, 22mo heifers carry mainly Coonamble and Tullibardine Angus bloodlines in the pedigrees and come from a herd which has many years of breeding and selection behind it.

The good honest, moderate frame, feminine heifers are PTIC to select low birthweight Angus bulls and have a calving period running from February 18 to May 15.

Nutrien Livestock, Mt Barker agent Harry Carroll said the heifers from the Albany-based operation were a top line of genuine heifers and were only on offer as they were surplus to requirements.

The heifers are based on Coonamble bloodlines and are back in calf to Coonamble Angus bulls.

The line is due to calve from March 19 to April 2.

There will be two big lines of Angus-Friesian, first-cross mated heifers offered by two regular vendors.

The biggest offering of these will come from the Houden family, The Southden Trust (Houden Pty Ltd), Redmond, who were the top-priced vendors in last year's sale.

The family will offer 50 PTIC Angus-Friesian heifers which are all owner-bred and bucket-reared in the family's dairy in which they milk 500 cows.

The 24mo heifers, which are sired by Arizona Farms Angus bulls bred from Coonamble Angus bloodlines and out of Friesian heifers, are in calf to Quanden Springs Angus bulls selected for their calving ease and high growth.

The extremely quiet heifers are due to calve from February 28 to May 10.

"They run a very good herd of Holstein Friesians which have bone and size," Mr Carroll said.

"These females combined with good Angus bulls result in them producing top females year-in and year-out.

"The feedback from past buyers has been that they get good longevity out of the females they have purchased from the Houdens." 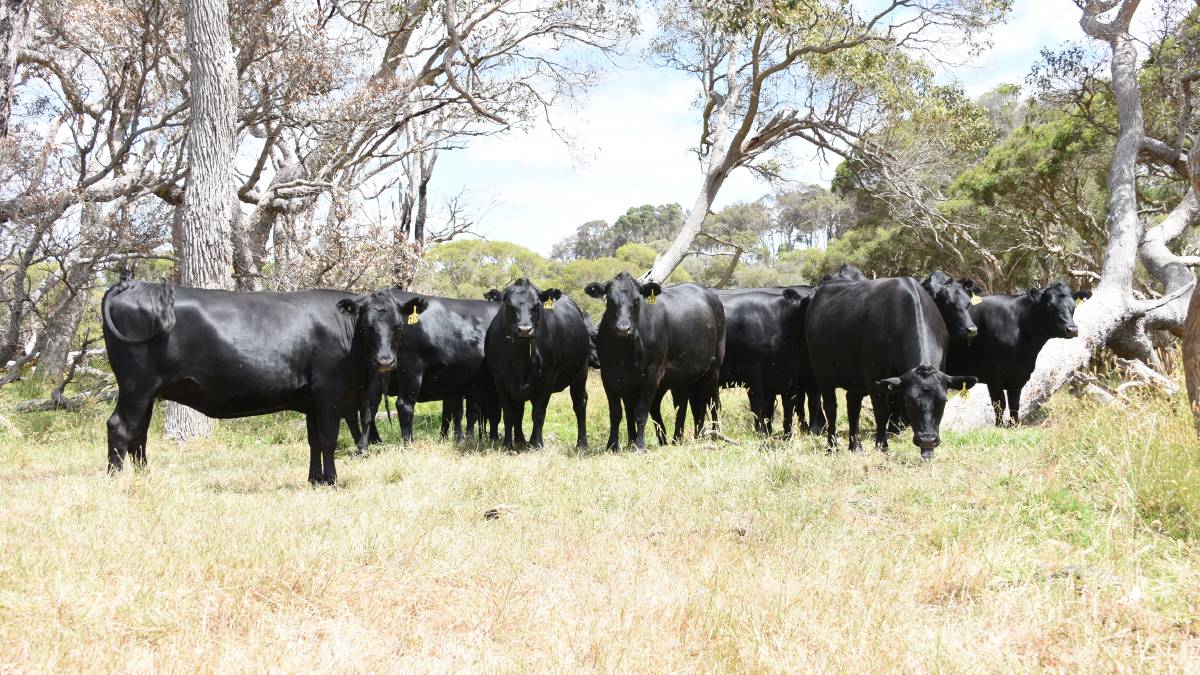 Regular vendor Candyup Farms, Bridgetown/Lower Kalgan, will offer 41 PTIC Angus-Friesian heifers in the sale. They were all synchronised AI'd to a low birthweight Sheron Farm Angus bull and are due to calve for 20 days from February 20.

Its offering will consist of 41 PTIC Angus-Friesian heifers, which were purchased from reputable South West dairies and joined and prepared especially for this fixture.

The 30mo, bucket-reared heifers were all synchronised AI'd to a low birthweight Sheron Farm Angus bull by Nutrien Breeding.

As result of the synchronised mating they have a short 20-day calving period from February 20 to March 11.

Rounding out the vendors to offer in the sale will be SJ Beal, which will offer seven Angus-Friesian, first-cross cows.

The 5-6yo cows are PTIC to a Limousin bull.

The bull sale will not start before 1.30pm.