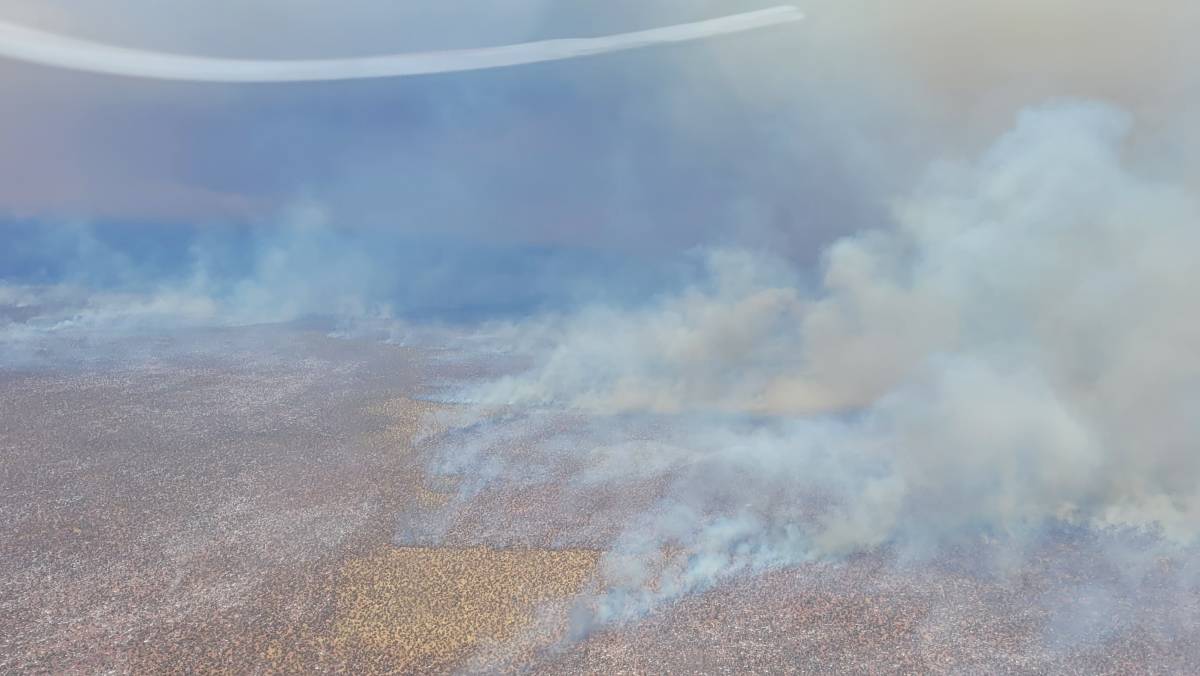 Firefighters continued to battle an out of control bushfire, which had burned through 226,982 hectares across the Gascoyne region, as Farm Weekly went to press on Tuesday night. Photo by the Department of Fire and Emergency Services.

Lightning, the best season on record and hot and windy weather conditions created the perfect storm for the fire with a bushfire "Watch and Act" in place for several stations in the Shires of Carnarvon, Shark Bay and Upper Gascoyne.

AN out of control bushfire continued to burn through and threaten parts of the Gascoyne this week, with pastoralists joining the fight to protect properties at risk.

As Farm Weekly went to press on Tuesday night, the fire had torn through 226,982 hectares across the region, including about 70,000ha at Meedo station, owned by Chris and Tim Higham.

Lightning, the best season on record and hot and windy weather conditions created the perfect storm for the fire with a bushfire "Watch and Act" in place for several stations in the Shires of Carnarvon, Shark Bay and Upper Gascoyne.

It comes after the Highams, who run both goats and sheep, recorded their best season on record.

Speaking to Farm Weekly on Tuesday afternoon, Ms Higham said 60 per cent of Meedo station had been affected by the blaze, which was first reported in the early hours of Thursday morning.

This included areas where the Higham were running livestock.

"It is very, very difficult to know the extent of our losses and we probably won't know until those fires are out," Ms Higham said.

"We are busy getting fodder and water back in, but obviously we still have fires burning.

"We have people out there as we speak picking up hay, fixing water pipes etc where embers have fallen and burnt holes into the poly.

"There will also be significant loss of fencing, but I am unsure what that entails."

By Tuesday, firefighters had contained the blaze on the western part of Meedo, however they were still battling to control the east flank.

"The fire that is now in Pimbee, Towrana and Winderie (stations) started to the north of us," Ms Higham said.

"We lost only a very small amount of country in the fire that started on Meedo because it was on our northern boundary and headed north east.

"The Winderie and Meedo fires joined forces in the north."

Communication was identified as one of the biggest challenges, particularly as stations did not have mobile devices and were working with satellite phones.

Ms Higham said heavy smoke cover caused some difficulties and there was too large of a distance for two-way devices to reach.

"They are limited by terrain," she said.

"We have a lot more heavy equipment in today (Tuesday), that are pushing lines through country that is pretty rugged and heavily timbered with sandhills.

"Our graders are tracking the fire, we have a large dozer pushing through bush and then the Department of Fire and Emergency Service (DEFS) has more equipment on the main drag.

"We are hoping to widen that, get a really good containment line in there and then cut back in.

"Pastoralists have joined the fight big time and are obviously first on the scene, doing everything they possibly can." 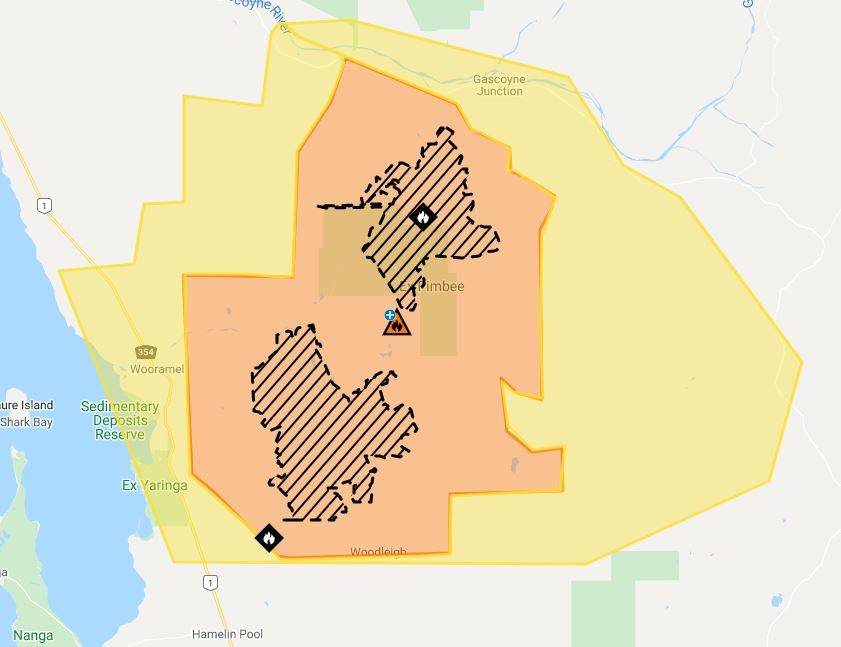 A bushfire "Watch and Act" was in place for several stations in the Shires of Carnarvon, Shark Bay and Upper Gascoyne. Photo by DFES and accurate at time of print on Tuesday night.

State Emergency Service, pastoralists and the Shires of Carnarvon, Shark Bay and Upper Gascoyne were also in attendance.

"The fire is moving fast in a south easterly direction," DFES reported.

"Firefighters are expecting the wind to change from westerly-north westerly to south westerly-westerly by early (Tuesday) afternoon."

Bureau of Meteorology (BoM) duty forecaster Jessica Lingard said a weak trough was in the vicinity of the bushfire on Tuesday morning.

Ms Lingard said as the fire covered such a large area, conditions were varied depending on the location.

She said temperatures were likely to increase to a maximum of 46 degrees on Wednesday (January 12) and would remain high through to Friday (tomorrow).

"We will start to see temperatures decrease as we head through the weekend.

"Temperatures will drop down closer to 40o, but not below.

"Generally speaking, we would be looking at some sort of south easterly wind through Thursday and again through Friday as well."

By the weekend, Ms Lingard said there could be an increase in humidity, which would make conditions less favourable for the fires.

She said that could help firefighters with their efforts.

Additionally, no further thunderstorms were predicted in the far west Gascoyne area.

"We are expecting some thunderstorms through eastern parts of the Gascoyne, but we don't expect them to be moving over that fire area, so that is good news.

"Thunderstorms in the area can wreak havoc with the winds if there are any downbursts or some stronger winds.

"It can become troublesome if there is a nice south westerly wind, but a thunderstorm in the east - suddenly you get this really strong burst of easterly wind coming through."

Ms Lingard said those bursts were difficult to predict and were not favoured by BoM or firefighters.

That advice was there was no threat to lives or homes, however despite not immediate danger people needed to be aware.