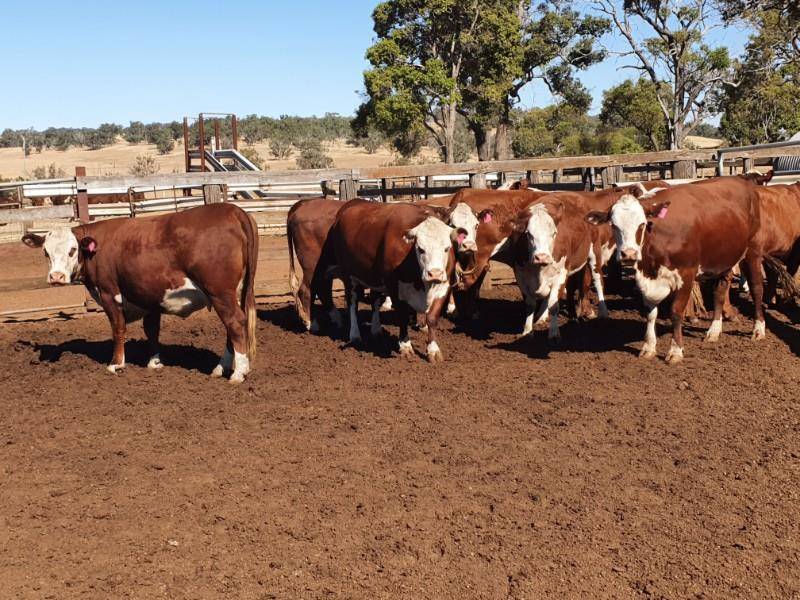 There was good interest on the AuctionsPlus platform with the sale receiving 2261 catalogue views.

AFTER holding a herd reduction sale last month for their Quaindering Poll Hereford stud, the Cowcher family, Williams, followed it up with a dispersal sale of their commercial herd on AuctionsPlus on Monday.

In the sale, which came about due to the family leasing out the property, 183 PTIC commercial Poll Hereford cows were offered across 12 lots on the online selling platform and all found new homes selling to a high of $3500.

There was good interest on the AuctionsPlus platform with the sale receiving 2261 catalogue views.

During the sale 45 registered bidders connected from WA, South Australia, Victoria, New South Wales and Tasmania and of these there were six active bidders which placed 109 online bids.

The cows, which were based on their own stud bloodlines, on offer ranged in age from second calvers through to 10-year-old breeders and all were sold PTIC after being pregnancy scanned in early November by Kojonup Vet Services.

Achieving the $3500 top price was a line of 10 second calvers averaging 651.2 kilograms when they sold to a Gnowangerup buyer.

A second line of nine second calvers averaging 612.9kg made $3400 selling to a Karlgarin buyer.

Both lines of second calvers were aged 29 to 31 months and PTIC to Angus bulls.

There were five lines of 4-7-year-old cows offered, totalling 70 head and all of these were PTIC to Poll Hereford bulls after running with the bulls from June 24 to September 20.

The best price in these was $3400 achieved by three lines and all three lines which contained 14, 15 and 12 head were purchased by the same Karlgarin buyer that purchased one of the lines of second calvers.

The other two lines of 4-7yo cow which contained 15 and 14 head both sold at $3300 to a South Australian buyer based at Keith.

This Keith-based buyer also picked up two lines of the 5-10yo cows offered.

All the 5-10yo cows were all PTIC to Poll Hereford bulls after running with the bulls from June 24 to September 20.

Also in the sale the Cowchers offered 31 registered Poll Hereford stud cows which ranged in age from five to eight years and were all PTIC to Poll Hereford bulls.

Seventeen of these sold in the sale all for $3000.

The Narrikup buyer which purchased two lines of the 5-10yo commercial cows secured 13 of these cows while two went to a South West buyer.

The remaining two stud cows, which were sold, were purchased by the earlier mentioned Keith and Gnowangerup-based buyers.

ELDERS, Williams agent Graeme Alexander said he was very happy with how the sale finished up.

"There was strong interest in the cows on offer from not only WA buyers but also the Eastern States and this resulted in a number of lines selling to a South Australian buyer.

"With good buying support we achieved a 100 per cent clearance of the commercial cows which was very pleasing," Mr Alexander said.

"They were well-bred cows with more than 50 years of breeding behind them so it was good to see buyers recognise this in their bidding.

"Overall it was a very pleasing result."