One of the $4500 equal top priced pens of Murray Grey heifers from Scott River Trading, Scott River. The heifers were purchased by GM & DL Sutherland Katanning.

Overall the Nutrien Livestock South West team offered 498 females, which were all bovine viral diarrhoea virus (BVDV) tested and guaranteed PTIC and there was outstanding quality in the line-up from start to finish.

RECORDS are made to be broken and broken they were at the Nutrien Livestock Premium Mated Beef Female Sale at Boyanup last week.

In the 2021 sale a national record top price for PTIC commercial Angus beef females was set when the Angus heifers topped at $4100.

This price pales in to insignificance when compared to the Angus top of $4400 this month and the overall top price of $4500 achieved by lines of Murray Grey and Gelbvieh heifers.

The three Chargrey heifers, while not making as much as the other breeds, were not disgraced with a top of $3700.

Overall the Nutrien Livestock South West team offered 498 females, which were all bovine viral diarrhoea virus (BVDV) tested and guaranteed PTIC and there was outstanding quality in the line-up from start to finish.

All vendors were rewarded for the breeding and presentation of their heifers with buyers chasing proven bloodlines and vendors, at the top end.

The Angus breed again had the largest numbers with 425 offered and sold to the top of $4400, shared between original sale vendors, the Muir family, GD Muir & Co, Mordallup Angus stud, Manjimup and Ed Russell and family, E & C Russell, Bridgetown.

It was not the first run of females offered by these vendors that sold at the top price, indicating that buyers took a little time to accept that budgets needed to lift to secure future breeders.

The $4400 top in the Muir family's heifers was paid by Nutrien Livestock, Manjimup representative Brett Chatley, who was buying for Clune Trading, for seven heifers. Buyers of 56 of the 65 Murray Grey heifers offered were Jasmine (left), Annie, Donna and Graham Sutherland, Katanning. With them after the sale is Nutrien Livestock South West manager Peter Storch.

The two-year-old heifers are PTIC to Mordallup Angus bulls and due to calve from February 4 to May 7.

When it came to the Russell family's top price pen, they had sold four pens before their fifth line of seven owner-bred heifers reached their $4400 top price and these heifers sold to the bid of D Manning Family Trust, Serpentine.

The Russells' heifers were AI joined to Millah Murrah Lakeside and backed up with Mordallup Angus bulls and are due to calve from February 23.

The Harris family, Treeton Lake, Cowaramup and Dardanup, had the honour of starting the sale with a magnificent pen of seven heifers, which had been AI'd to Coonamble Nic Nat and due to calve from March 2.

The pen sold to Blue Dog Downs at $4300, with this buyer also paying $3900 for the third pen of Treeton Lake heifers offered.

The first of the Muir family's heifers with a March to May calving made $4100, paid by D Manning Family Trust, with the next seven heifers bought by Nutrien Livestock commercial cattle manager Skye Ogerly at $3900. A Westcoast Wool & Livestock account added support throughout, first paying $4100 for seven Candyup Farms, Boyup Brook, heifers before adding another pen from this vendor at $3900.

The Candyup Farms' heifers were PTIC to Sheron Farm Angus bulls and due to calve from March 4 to May 6.

The Ravenhill account ended the day by purchasing 100 Angus heifers all up.

Included in its draft were six from Scott River Trading, Scott River, at $4000 and a pen from the Russell family at $4100.

The first two pens of seven younger but quality Angus heifers from the Toovey family, LT Toovey & Sons, Cranbrook, both made $3900 were purchased by Lance Ockwell, Pemberton.

The heifers were based on the Tooveys' own Boyacup Angus bloodlines, which have a strong Coonamble influence.

They were sold back in calf to Boyacup Angus bulls and due to calve from February 25 to April 29. 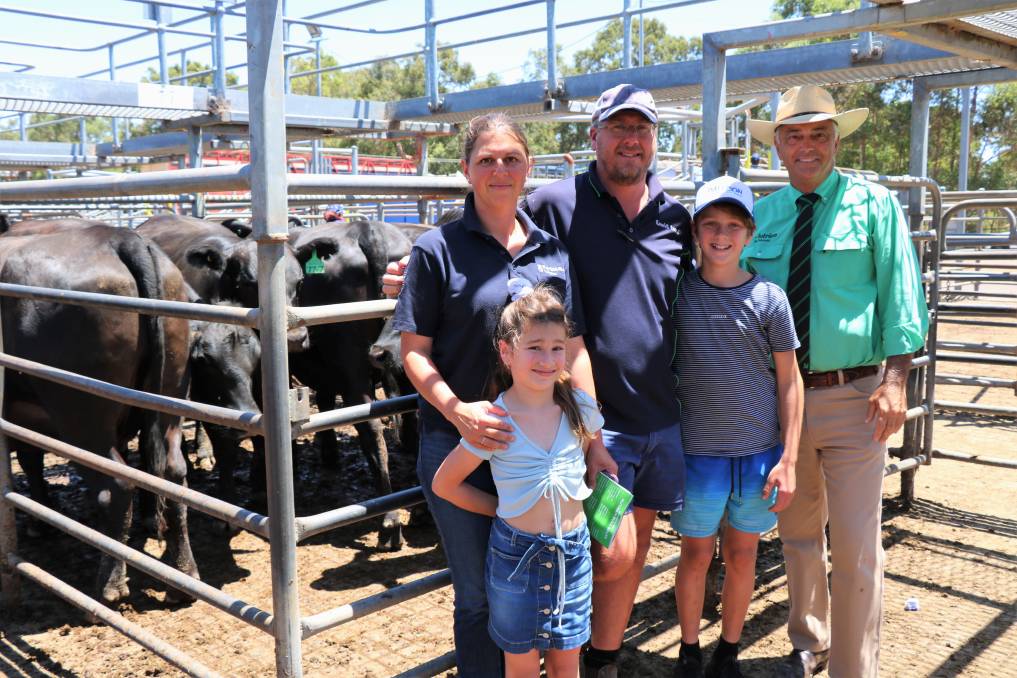 A popular result was the eight heifers from ST Francis bought by TC & K S Cox, Elgin, for $4000 before the Ravenhill family bid to $3700 for another eight of these.

The best of several pens of Angus from GF Dennis, Marybrook, went to J & PJ Watkinson, Kojonup, at $4100, with a pen later in the sale bought by Jock Embry, Nutrien Livestock, Margaret River at $3600.

Towards the end of the black females, Westcoast Wool & Livestock bought seven Candyup Farms heifers for $3900, while Ravenhill Pastoral paid the same for the next pen sold account GW & J Oliver for prices to hold.

The results in the section were helped considerably when GM & DL Sutherland, Katanning, bought nine of the 11 pens offered.

This included paying the top of $4500 for seven Scott River Trading beauties, with other pens from this vendor also purchased by the Katanning operation at $4200 and $4300.

Another pen of four Scott River Trading heifers cost the Sutherlands $4500 as well.

The offering of heifers from Scott River Trading were all owner-bred and based on pure Monterey bloodlines.

They were also PTIC to a Monterey Grey bull and due to calve from February 23 to May 11. The Farris Family Trust, Busselton, changed from being a buyer in 2021 to a seller this year when it also offered a pen of three Chargrey heifers that were bought by Nutrien Livestock, Peel representative Ralph Mosca, for L Gray.

The sale finished on a high note when the last pen, five Gelbvieh heifers from EP & DK Gardiner were knocked down in one bid to the equal top price of $4500 to Hunt Lea Valley.

These heifers are PTIC to a Limousin bull and due to calve from March 17 to May 28. 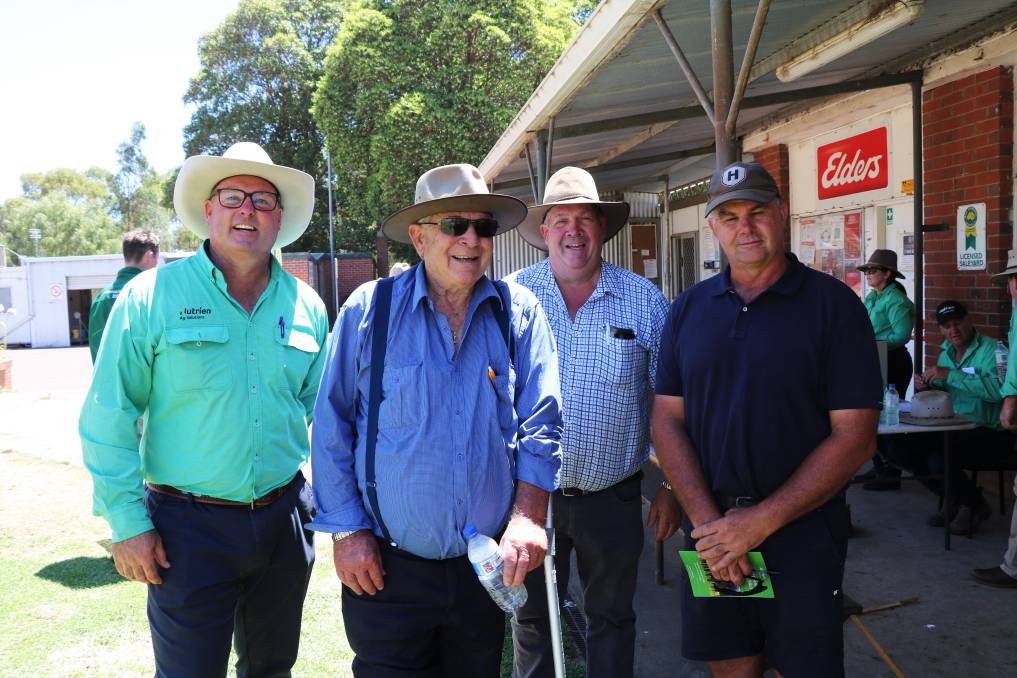 Sale auctioneer and Boyanup/Capel and Donnybrook agent Chris Waddingham (left), with his clients and vendors George and Andrew Toovey, LT Toovey & Sons, Cranbrook and Mark Harris, Treeton Lake, Cowaramup. Treeton Lake opened the sale with a pen of Angus heifers which sold for $4300 while the Tooveys sold heifers to a $3900 top paid for younger Angus heifers.

NUTRIEN Livestock auctioneer and Boyanup/Capel and Donnybrook agent Chris Waddingham said the quality of the offering was outstanding.

"We have worked hard on the quality of females invited to this fixture and today we saw that was appreciated by the buyers," Mr Waddingham said.

"The market was strong form start to finish across all the breeds on offer.

"On behalf of Nutrien Livestock I extend our thanks to all vendors, buyers and underbidders for their continued support."