Mark Muir and daughter Diana, GD Muir & Co, Mordallup Angus stud, Manjimup, looking over some of their quality calves in the sale that sold to $2237.

At the conclusion of the sale, many were saying prices were lower, but perusal of the last sale at this venue in 2021 showed barely a few dollars difference in the overall average which finished close to $2050.

At the conclusion of the sale, many were saying prices were lower, but perusal of the last sale at this venue in 2021 showed barely a few dollars difference in the overall average which finished close to $2050.

If you pick a certain section there was a small easing, but equally, the heifers lifted considerably under strong demand.

Steer calves topped at $2313 in the Elders section, while the top cents per kilogram price of 710 cents a kilogram was achieved in the Nutrien Livestock catalogue.

Some excellent heavyweight drafts were offered in the Nutrien Livestock section, with none better than the annual offering from the Muir family, GD Muir & Co, Mordallup Angus stud, Manjimup. Nutrien Livestock, Brunswick and Harvey agent Errol Gardiner then snapped up the next six pens of Muir calves for up to $2237 and 610c/kg.

Nutrien Livestock, Margaret River and Busselton agent Jock Embry secured the last pen offered by the Muirs for his clients at 620c/kg and $2096.

The top steer price in the Nutrien Livestock offering was $2281, paid for the best of a large draft from GL & RK Dickson, Nannup, when Kalgrains bid to 594c/kg for the Angus steers weighing 384kg.

Later in the sale, a second run of Dickson calves topped at 710c/kg when the 288kg calves were knocked down to Mr Embry for $2044.

Another of the larger runs were the 10 pens from AR & GR Fawcett, Pinjarra, with the tops making $2226 when bought by a Westcoast Wool & Livestock account, while Welldon Beef added five pens to $2187 and 610c/kg.

With smaller numbers, but holding equal in values, was a pen of 10 Chargrey steers weighing 374kg from LG Ockwell, Pemberton, that sold to Kalgrains, Wannamal, at $2217 and 592c/kg.

The first pen of heifers from Bandicoot Bay Farms, Busselton, were the top price when the 10 Red Angus weighing 403kg sold to Kalgrains at 558c/kg to cost $2251.

The top of 632c/kg was paid by Richard Pollock, Nutrien Livestock, Waroona, for six Angus cross.

While Elders had lesser numbers, its offering was of no lesser quality or weights. 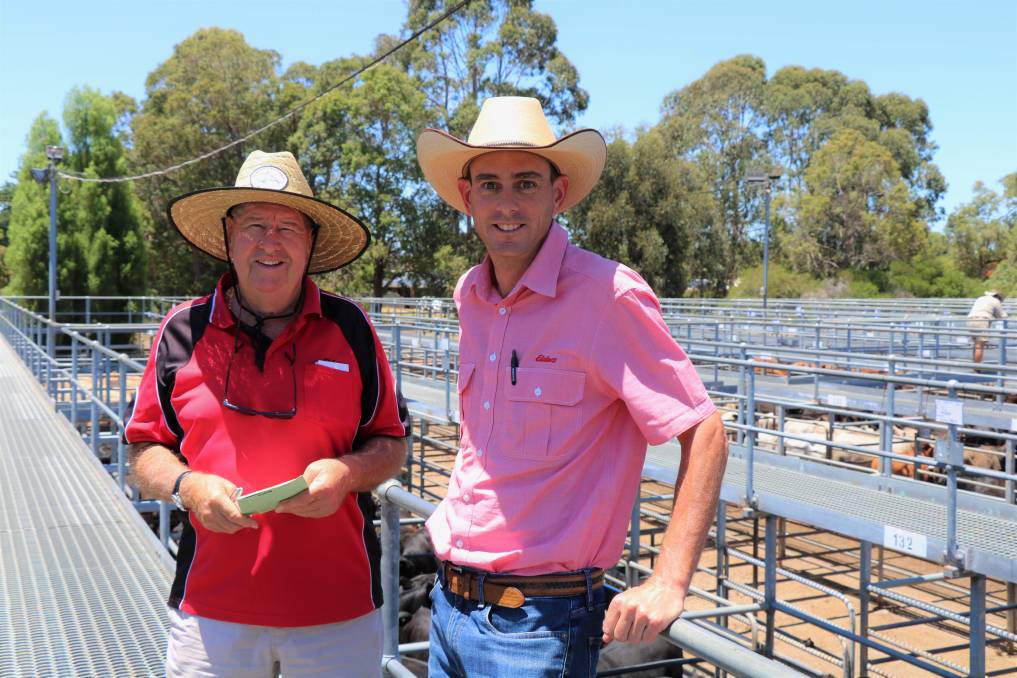 It was well into the steers of the Elders section before the top steer price overall for the sale of $2313 was realised, when nine 407kg Shorthorn cross from the Prossers' offering went to Kalgrains at 568c/kg, proving softness and quality does attract cattlemen away from blacks.

The Prossers' draft also had Charolais cross with the first 11 Bardoo blood steers weighing 444kg going to Kalgrains for $2200 before another 10 went at $2169.

Angus steers weighing 392kg from TWT Dickson, Nannup, were bought by Westcoast Wool & Livestock at 580c/kg to return $2276 while Graham Brown paid $2065 at 580c/kg for his lotfeeder client.

Support was absent from the usual Eastern States, but it did not have a great effect on the result, allowing more grazier purchases.

The top price in the Elders run heifers were in the first pen of 10 Charolais cross offered by FR &LF Prosser, Scott River, when Kalgrains added the 398kg females to its load at 544c/kg and $2165.

The top c/kg price in the heifers in the Elders run was 582c/kg for a pen of 11 Angus heifers from MA Sherwood when the 303kg females sold at this value to return $1767.

NUTRIEN Livestock auctioneer and Boyanup/Capel and Donnybrook agent Chris Waddingham said it was pleasing that the market continued after the festive break with the same strength across all classes and weight ranges.

"By close analysis the heavier steers were back slightly, perhaps 5-8 cents a kilogram, yet the light steers were dearer," Mr Waddingham said.

"Heifers were too few in number to accurately comment."