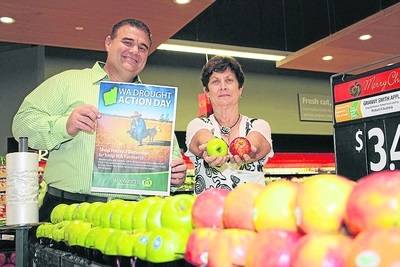 The Country Women's Association and Woolworths are again teaming up for the Woolworths Drought Appeal on Friday, December 3, with CWA of WA president Maggie Donaldson and Woolworths WA regional manager Brad Bolin encouraging everybody to buy their groceries on that day at a Woolworths store and support the cause.

THE second driest winter on record for WA hasn't gone unnoticed by supermarket giant Woolworths, which is holding a Drought Action Day on Friday, December 3.

THE second driest winter on record for WA hasn't gone unnoticed by supermarket giant Woolworths, which is holding a Drought Action Day on Friday, December 3.

Woolworths will team up with the Country Women's Association (CWA) to donate the day's profits from fresh fruit and vegetable sales from its 83 stores throughout the State to help farming families and communities affected by drought in WA.

Woolworths WA regional manager Brad Bolin said even though the Eastern States was experiencing a bumper season, the company recognised the need to support WA farmers.

"We rely on many WA farmers for our fresh food, so it is really important that we support them, especially during times of drought," Mr Bolin said.

"This year's event is all about WA supporting its own farmers and we want to encourage customers to really get behind it by stocking up on fresh fruit and vegetables on December 3, or even make a small donation themselves when they get to the checkout."

In previous years customers have responded exceptionally well to Woolworths' national Drought Action Days in 2007, 2008 and 2009, raising a total of $17.6 million including $1.7 million for WA.

Extra fundraising such as sausage sizzles, cake stalls and collection tins will start at every store from Monday, November 29, and continue throughout the entire week.

Over the last four years, Woolworths and the CWA have worked together to establish drought appeals and have again teamed up to ensure the funds reach those in need.

CWA of WA president Maggie Donaldson, said the funds from the drought initiative were much needed throughout rural WA, particularly during the Christmas period.

"Woolworths has given a great deal back to farming families over the last few years but the harsh reality is that support for thousands of people here in the west is again needed," Mrs Donaldson said.

"We are very grateful Woolworths has recognised this and has continued its long-standing commitment to helping farmers through tough times."

Ms Donaldson said 30 per cent of the profits donated will go towards gift wish cards which can be redeemed at Dick Smith, Big W and Woolworths stores for back-to-school supplies and food necessities.

For further information visit www.woolworths.com.au and to find out more about the CWA household assistance eligibility, call the CWA of WA on 9321 6041 or visit its website www.cwaofwa.asn.au to download the application forms.