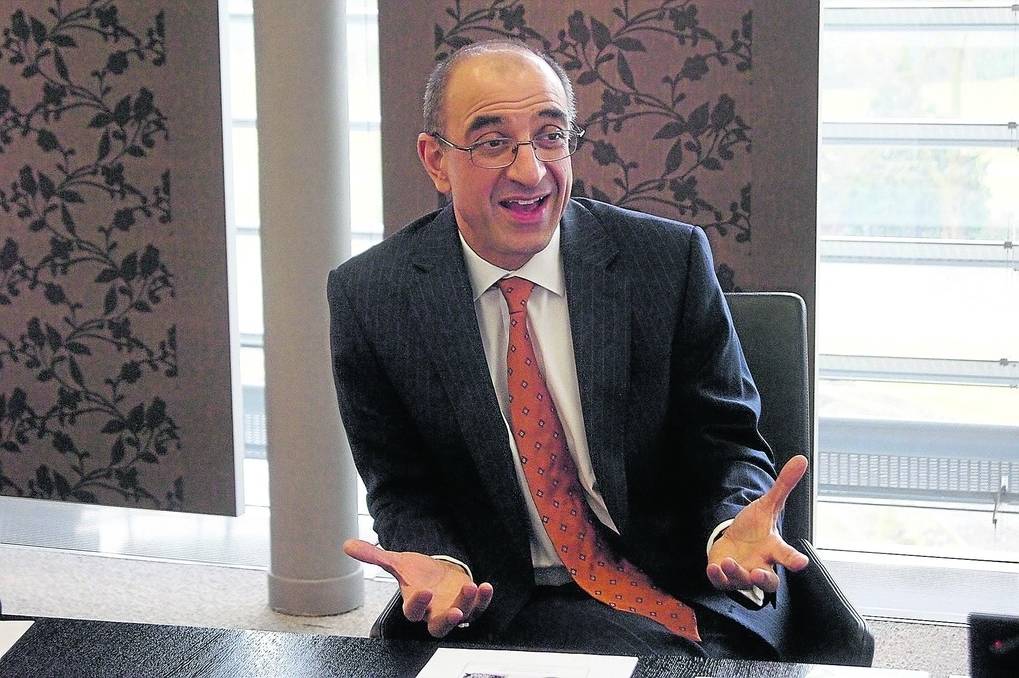 BAYER board member Kemal Malik has painted a gloomy picture about the state of play in Europe for genetically modified (GM) cropping and the technology's future.

BAYER board member Kemal Malik has painted a gloomy picture about the state of play in Europe for genetically modified (GM) cropping and the technology's future.

Mr Malik is responsible for innovation with a budget of 4 billion Euro per year (AU$5.9b) on research and development in the company's core business areas including human health and crop protection.

In a wide-ranging interview last week, he said Europe's consumer rejection of GM crops and foods was an emotional reaction that sharply contradicted scientific acceptance of proven medical and human health benefits of genetic modification.

Mr Malik said if the average person on the street was offered a cure for cancer, Haemophilia, cystic fibrosis or "whatever" by using a genetic tool that removed the faulty gene they'd say: 'Yes, sure where can I sign on?' but would reject GM food.

As an example of where Europe had lost the GM debate, "at such a visceral level", he referred to a recent survey in Germany where consumers said "no" when asked if they'd eat a biotech food product, despite admitting to not knowing what it was.

"I think we've lost the debate on GM crops in Europe," he said.

"I don't think there's enough political will to challenge the debate.

"I don't think the industry did the greatest job to be honest of taking the public and law makers with them in Europe.

"As an industry we were so convinced of the technology we thought it was obvious that it should be accepted by society (but) it hasn't been and I don't see that changing any time soon in Europe."

Mr Malik said Bayer wasn't as big on GM technology R&D as rival crop protection companies such as Monsanto or DuPont but was convinced the technology is safe and effective.

But he said powerful lobby groups had opposed the technology and fears were held these non-government organisations would try to sabotage newer technologies such as DNA editing.

"There are already signs from some of these groups that they want to bundle DNA editing into the same space as GM and say that it's wrong and that really would be a disaster," he said.

Mr Malik said German and European farmers were unhappy about being denied access to GM crops because they could see producers benefitting from the technology throughout the world.

He said he spoke about the associated challenges with GM crops and scientific acceptance to politicians at the EU parliament in Brussels last month.

A key message was that most of the science and research on GM technology was conducted in Europe, but other parts of the world are benefitting from its use.

Mr Malik said European legislation and treaties applied the precautionary principle that meant any harm should be avoided but an "innovation principle" was also needed to ensure Europe remained globally competitive.

He said he warned politicians in Brussels that Bayer's annual R&D budget of 4 billion Euros doesn't have to be spent in Europe.

"We can spend it anywhere in the world," he said.

"If Europe isn't a place where innovation is either respected or wants to be paid for - or is just not allowed - then there are other places in the world we can do it."

Mr Malik said the company didn't expect laws and regulations to be made by industry or scientists and they should be made by politicians because "that's how we can vote them in or out".

But he said politicians should also listen to the scientific viewpoint but this had not occurred enough in the GM debate, which was partly industry's fault.

"I think it is too easy for us as an industry to blame NGOs or whatever," he said.

"We didn't engage enough at explaining this and explaining what we thought was safe and science based (technology) and we've lost the debate."

But being able to import GM feed grains from the United States in times of short supply was a "paradox" underpinning the whole debate, he said.

"We import it and animals eat it and then we eat the animals - it's just totally illogical," he said.

"And I think sadly, I sense zero willingness to even entertain the (GM) debate in Europe and at some stage as an industry we need to self-reflect on how we've allowed it to get to this situation.

"Despite our size we were totally out-manoeuvred by these groups.

"I do blame them because they were very powerful - but we're not exactly without power and influence and we failed.

"If you look at the combined efforts of companies like Bayer, Dupont and Monsanto - we've just failed to get this debate right.

"We would be willing, if we had this technology, to use it in humans for DNA editing but then there are all these scare stories about using it in the food we eat."

Mr Malik said a GM product with human health benefits, such as Golden Rice which contained a Vitamin A supplement, was barred in Europe.

"You don't have a single GMO crop being grown in Europe for commercial benefit," he said.

But Mr Malik said he believed greater public acceptance would occur through future medical advances in genetic modification which would be viewed as more "remarkable" for curing certain diseases.

He said that would spark greater willingness to say "this isn't Frankenstein" and is "actually something that could be of benefit".

"It may be that when they (the public) see real cures coming in the medical space, people will say 'this actually isn't that bad'," he said.

"(But) if we don't get this right, as a society, we're going to suffer the consequences - people will suffer.

"There will be nine billion people in the world - there's seven billion now - in 30-40 years and we need to feed them."