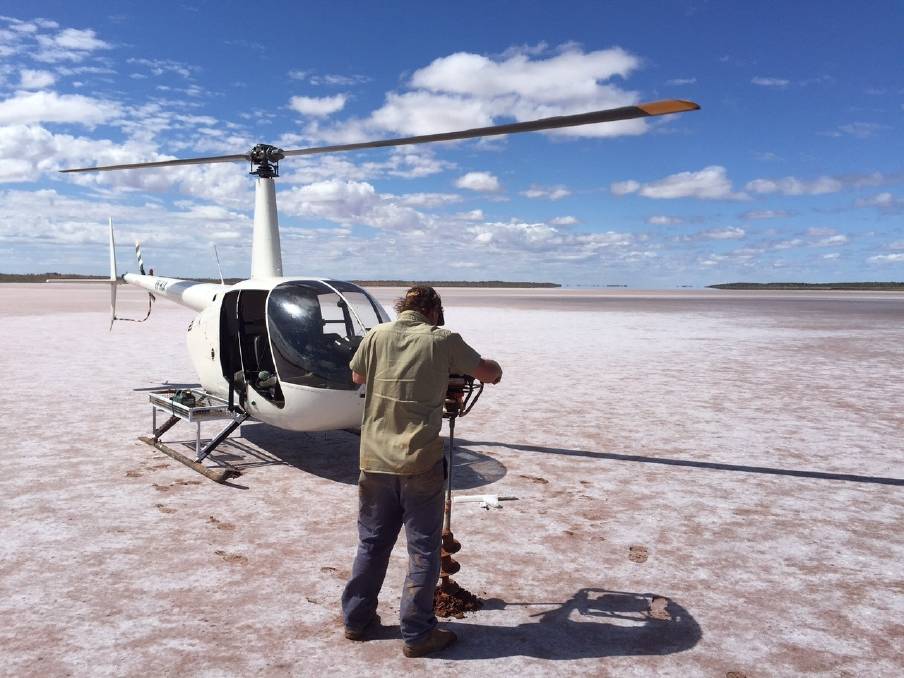 Drilling through the salt crust of a dry lake in the Little Sandy Desert to establish brine depth.

A RACE is underway across remote stretches of WA deserts which, according to the participants, may have potential benefits for Australian agriculture.

A RACE is underway across remote stretches of WA deserts which, according to the participants, may have potential benefits for Australian agriculture.

Winner's prize is market share from being first in Australia to produce a premium high-return, non-chloride, potassium and sulphur replenishing fertiliser that is currently imported.

Apart from replacing imported fertiliser with a local product, the winner would also have a decent head start on a niche fertiliser export business.

The aim is to use abundant sunshine and warm temperatures across the northern Goldfields and East Pilbara to produce Sulphate of Potash (SOP) - the second most popular form of potassium fertiliser - from brine.

Extensive testing, mostly in the past five years, has established sub-surface brine at some ephemeral playa lakes and salt lakes scattered across remote WA has a high potassium and sulphur content - a prerequisite for SOP production and a rare global find in commercial quantities.

A lake in The Great Lakes region in North America, one in Chile and a lake in China are the only existing commercial sources of SOP from brine.

Proposals being investigated are to pump potassium and sulphur-rich brine from beneath some of WA's playa and salt lakes.

The brine extends from less than a metre under the crust down to about 100 metres in places through mud and ancient drainage channels beneath the lakes.

Evaporation ponds - the cheapest production method available would remove the water leaving behind potassium and sulphur to be separated from sodium in processing, before being graded and trucked out as SOP.

SOP exploration licences, mining tenements and test bore holes cover lakes north from Lake Chandler in the Wheatbelt, 50 kilometres north of Merredin where potash was last mined in the 1950s, and Lake Ballard west of Menzies in the Goldfields, site of artist Anthony Gormley's installation on the salt surface of 51 statues based on residents of the town.

Lake Minigal and Lake Irwin near Laverton and Lake Wells 180 kilometres north-east of Laverton on the edge of the Great Victoria Desert are being investigated, as are a chain of playa lakes between the Great Northern Highway and Canning Stock Route in the Little Sandy Desert.

Further up the Canning and deeper into the Little Sandy Desert, Lake Disappointment sitting astride the Tropic of Capricorn, Lake Auld and Lake Dora in the Karlamily (Rudall River) National Park are also targeted for investigation of their SOP fertiliser production potential.

Still further north on the Canning and into the Great Sandy Desert, the Percival Lakes chain, and across on the WA/Northern Territory border in the Gibson Desert, Lake Mackay - the largest salt lake in WA - Lake Macdonald and Lake Hopkins are also being surveyed.

Indicative global SOP production cost using that method is about $387 a tonne.

Using brine and WA sunshine, the production cost should come in between $260 and $300 per tonne, according to some estimates.

At least six local WA companies, plus one each based in Darwin and Brisbane, are in the race to be first to produce commercial SOP fertiliser in WA.

Estimates vary, but information to potential investors suggests a retail price of anywhere from $600 to more than $1000/t on global markets.

By comparison, MOP, the most widely available potassium fertiliser often used on cereal crops such as wheat, oats and barley, sells for about $314/t.

MOP contains slightly more potassium than SOP but almost half is chloride, which can add to soil or existing water salinity, and it has no sulphur.

Because of the price premium SOP is a more niche product.

It is generally used on higher-value leaf crops and fruit and vegetables to enhance growth, flavour and shelf life, and to help protect from pests and disease because it strengthens stalks and root systems.

It can help with water retention and makes crops more resilient to weather stressors.

SOP is also used on sensitive crops and pastures likely to be burnt by MOP chloride, and on sulphur-deficient soils.

It has the lowest salinity index of all potassium fertilisers.

If SOP were more readily available at a price close to MOP then farmers would use SOP in preference to MOP for all crops, the proponents looking to produce SOP claim.

They point to growing demand for it and say they are confident demand will continue to grow.

Its advantages over MOP will ultimately out-weight price and availability disadvantages in the longer term, leading to greater usage, they claim.

They suggest world population growth will drive demand for greater yield from food-growing areas and a need to restore degraded agriculture land - SOP fertiliser can play a role in both - so they see a potential global market expanding for generations to come.

According to Nick Drew, executive manager of Fertiliser Australia, the industry association representing manufacturers, importers and distributors of fertiliser in Australia, between 30,000 and 40,000 tonnes of SOP is imported annually.

Global demand for SOP is about six million tonnes annually, or 10 per cent of the potassium fertiliser market.

Those figures explain why the race is on - the first project to reach commercial production can virtually corner the Australian market for SOP.

"The first one in (to production) will be the first in Australia and will take most of the market," Mr Widger said.

"The second one in will probably do ok, but you wouldn't want to be fourth in," he said.

Last week KLL, which was incorporated in July, issued a prospectus lodged with the Australian Securities and Investments Commission for a capital-raising share offer.

It hopes to raise at least $3m, and possibly up to $6m if its offer is oversubscribed, by December 12 through public uptake of 20 cent shares.

It has said it will apply to the Australian Securities Exchange (ASX) for listing at the close of the offer and intends to use the capital raised to further firm up its Beyondie Potash Project some 160km south east of Newman.

Formed as a private company in 2014, KLL has Newman pastoralist and business owner Brent Smoothy as founder and major shareholder.

From Sylvania station east of Newman he runs more than 44,000 cattle on Hillside and Panorama stations near Marble Bar, Kumarina station south of Newman - the Kumarina pastoral lease covers much of KLL's Beyondi Potash Project - and a 3237 hectare finishing feedlot at Eneabba.

The helicopter pilot runs Smoothy Helicopter Services with eight helicopters - down from 13 at the peak of the mining boom - and local earthmoving and construction business Rachlan Holdings Pty Ltd.

He has gathered legal and technical skills around him in KLL.

While it was last entrant to declare itself in the race to commercial SOP production, according to Mr Widger, KLL was probably ahead of the pack.

In the past two years the company has gained 15 exploration licences and a miscellaneous licence covering an area of about 2400 square kilometres along a chain of playa lakes between Kumarina roadhouse on the Great Northern Highway and wells 10 and 12 on the Canning Stock Route.

According to its prospectus, the brine tested from its tenements has "superior chemistry" and some of the best critical sodium to potassium content ratios recorded in Australia.

It has pumped 5m litres of brine in a test, conducted evaporation pond trials, has a contract with a German company with experience in processing SOP and a memorandum of understanding with the Mid West Ports Authority about possible export of SOP fertiliser out of Geraldton, 800km away.

But the finish line is some way off and other competitors are not far behind.