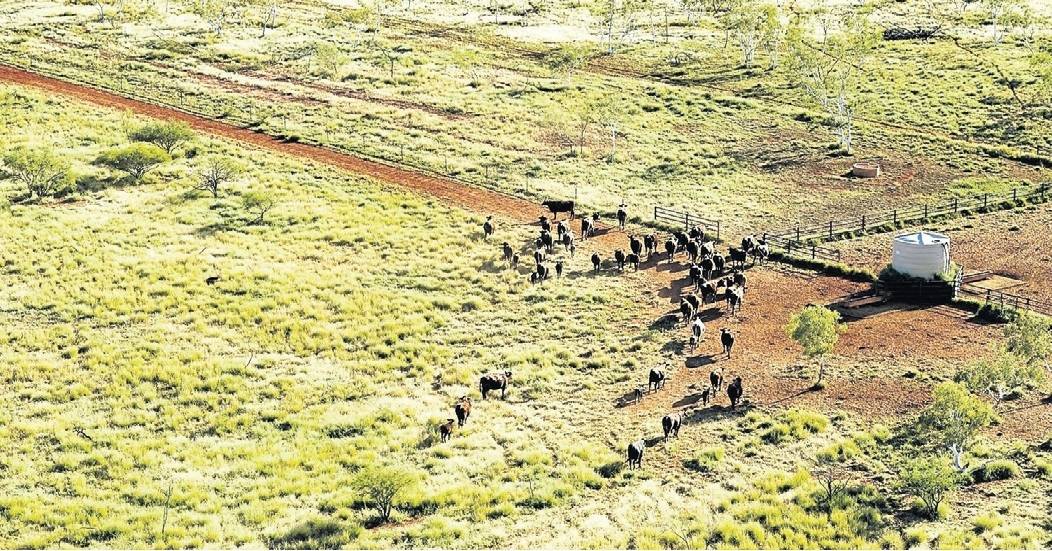 Andrew Forrest's Minderoo Group have moved into Ultra-Black genetics to build on the 'beef'characteristics across northern WA.

MINDEROO station continues to expand – growing its genetics and supply chain focus across the State.

MINDEROO station continues to expand – growing its genetics and supply chain focus across the State.

The Pilbara cattle station, near Onslow, dates back to 1878 when it was established by the Forrest family.

Mining magnate Andrew Forrest grew up there, and six years ago he and his wife Nicola bought it back.

The Forrests’ Minderoo Group has since continued its foray into agriculture, acquiring two Gascoyne cattle stations, Brickhouse and Minilya stations, near Carnarvon.

It also took over two Pilbara leases, Nanutarra and Uaroo.

After three years, the cattle herd totals more than 50,000 head across the five stations, which encompass more than

Minderoo has also invested significantly in improving its herd genetics.

The station’s base breeder herd of Droughtmaster cows

are lightly infused with Red Angus and Senepole genetics

to enhance maximum hybrid vigour, whilst maintaining an

efficiency, which was flowing through the supply chain.

“We are starting to see the offspring of our investment in improving the herd,” Mr Wratten said.

“We are seeing them come through the Harvey Beef supply chain in the 100-day grain fed program.”

adding carcase traits that would demand a higher return on the investment.

The company also hoped it would provide a template for other pastoralists in the area to follow.

Mr McDougall said it was part of an evolutionary change, following the live export ban in 2011, and pastoralists were seeking diversification.

“This is part of our value add process,” he said.

“We want to get more kilograms of beef from our pastoral aggregation.

“If we can get an extra 10 kilograms out of every animal we have, we don’t need more cattle.

“This is real world leadership, getting out there are doing it – and showing it can be done.

“Where others are using cattle that are more biased for live export, we are pursuing excellence.”

Mr McDougall said the five stations were a strategic purchase.

“They are lineal and complement each other, with the seasons and the flow south,” he said.

Minderoo’s last station purchase was in August 2015. Minderoo Group head of investment John Hartman said the company was always looking at opportunities to build on its supply chain, but

was focused on its large scale beef business.

Mr Hartman said the Forrests purchased the business with a clear focus to make it an integrated business.

“A lot of people talk about ‘paddock to plate’ - but when you look at how many people in the beef industry do it, it’s not many, especially not in WA,” he said.

Mr Hartman said only one set of corporate hands was on the beef that Minderoo produces, the entire way from cattle being born on a Minderoo station, value adding through feedlotting,

processed at Harvey Beef, potentially retail ready packed on site at Harvey, exported to international markets and sold directly to the end customer.

“By increasing margin capture across the supply chain we have the ability to give returns to Australian farmers – to make it more sustainable and consistent,” Mr Hartman said.

Mr McDougall said the main driver was food safety and to create a more sustainable supply chain to give producers confidence and further returns.

“It gives producers some destination feedback, where we are taking it,” he said.

“It’s not so speculative or opportunity driven – it is long-term driven and I think that’s the difference.

“I don’t think many producers in WA have had that over the years.”

Mr Hartman said part of developing the supply chain was “ “creating an environment for all willing participants in the WA beef supply chain to grow together”, including producers

This included fifthgeneration, award-winning dairy farmer Graham Manning, Harvey, who was forced to dump close to

16,000 litres of chilled fresh milk last year after his milk contract was not renewed.

Harvey Beef and Mr Manning recently struck a deal to help Mr Manning transition from dairy into the beef sector.

Harvey Beef delivered about 100 premium cattle to Mr Manning for backgrounding for its 100-day grain fed beef product, under

“We have a forward vision of what we are doing,” Mr Hartman said.

“We wanted a program that complements industry. “Backgrounders are keen to get on board and be utilised like never before with our 100-day beef program.

“Producers, backgrounders and lotfeeders are integral in

Minderoo Group’s stations are supplying Harvey Beef with about 10 per cent of its through-put, with plans to continue to grow, including its processing facility in Harvey.

“The growth will come from genetic performance, herd management and efficiency, not just more land and head of cattle,” Mr McDougall said.

“We are an integrated business, but the producers make up a large part of our through-put, they are our customers.

“We have a responsibility to give them clear signals and feedback and take them on the journey with us.”

The field day will be held at Uaroo and Minderoo stations, and will look at its irrigation systems, advanced auto-technology drafting, yard design and Ultra-Black genetics.

Mr McDougall will be discussing the Minderoo journey and future