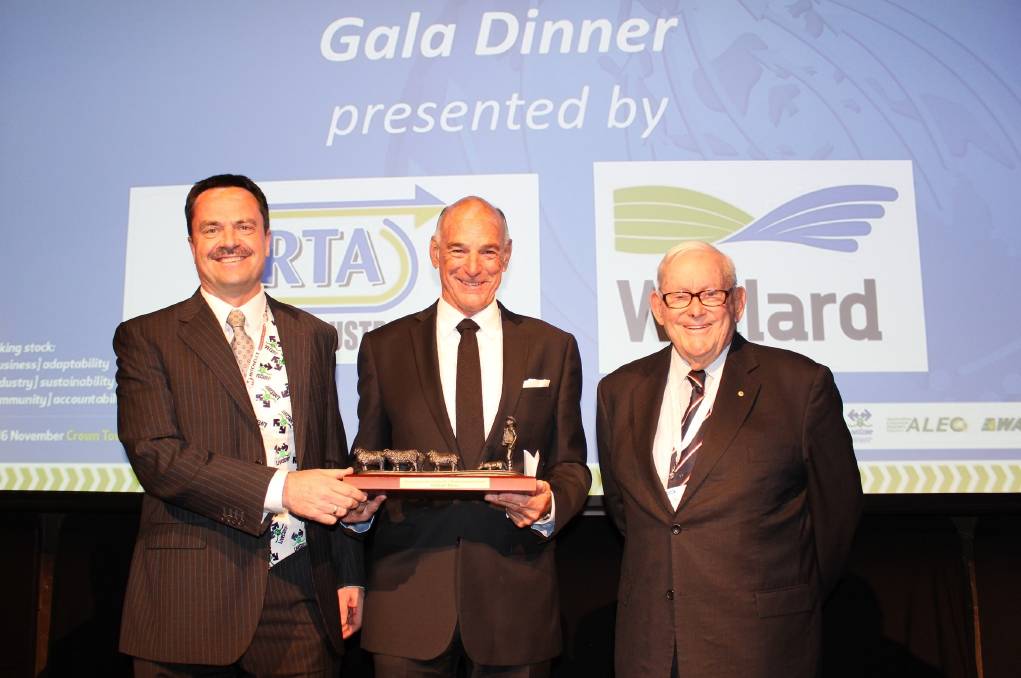 WITH almost 50 years’ experience in the live export industry, Emanuel Exports managing director Graham Daws was last week inducted into the LiveCorp Hall of Fame after being presented the Lifetime Achiever Award at the LIVEXchange 2017 gala dinner.

WITH almost 50 years’ experience in the live export industry, Emanuel Exports managing director Graham Daws was last week inducted into the LiveCorp Hall of Fame after being presented the Lifetime Achiever Award at the LIVEXchange 2017 gala dinner.

Mr Daws was one of two award recipients at the annual event at Perth’s Crown Towers last Thursday.

After joining Emanuel Exports in 1971 – a company his father Tom incorporated in 1955 – Mr Daws has gone on to play a central role in Australia’s live sheep trade to the Middle East.

He was a founding member of the WA Livestock Exporters’ Association (WALEA) in 1977 where he served as chairman for five years and was involved in the formation of ALEC in 1985, which he later chaired for multiple terms.

Mr Daws was also a founding member of LiveCorp in 1998.

LiveCorp chairman Terry Enright said that Mr Daws had made an extraordinary contribution to the industry over almost five decades.

“Graham and his family have had a huge impact on Australia’s livestock export industry, especially as a driving force in the live sheep trade from WA to the Middle East,” Mr Enright said.

“His place in the industry’s Hall of Fame is thoroughly deserved.”

Veterinarian Dr Ludeman was recognised for her work combining her veterinarian qualifications with her experience in compliance and welfare roles within the live export sector.

Dr Ludeman joined the HAAFCO team in March, after working in private practice and at Livestock Shipping Services’ as an operations and compliance manager.

The 35-year-old Victorian is a former Wellard Livestock Welfare recipient with extensive experience working in importer supply chains with veterinarians, quarantine officials and other in-market stakeholders.

As part of the Young Achiever award Dr Ludeman will participate in the eight-day, cross-sector Australian Rural Leadership Program’s 2018 TRAIL program in Canberra.

“The leadership program is something I’m really excited about,” Dr Ludeman said.

“It’s something that I wanted to do to professionally develop my skills and inspire me to engage with my staff better.

“The social and cultural challenges of the live trade are real, but I look forward to continuing to work in this industry because I’m passionate about the livestock industry, I’m proud of the way we are embracing our social licence to operate with greater transparency and modern operational systems.”