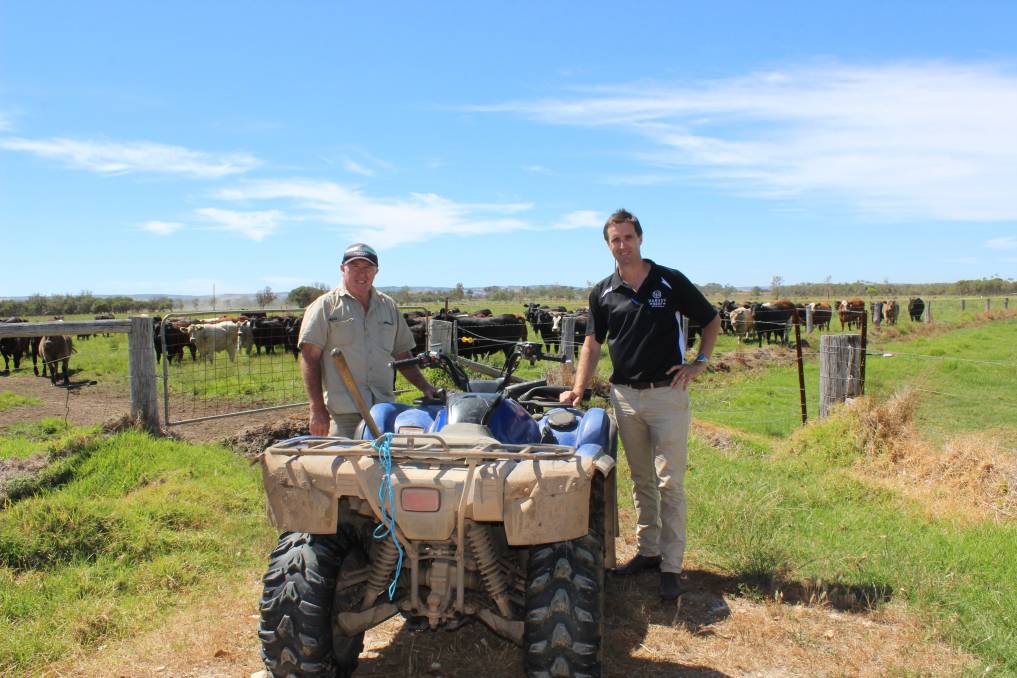 A FAMILY history in honey is repeating for Graham Manning, Harvey, who hopes it will help erase a sour taste left by a forced departure from the dairy industry last year.

A FAMILY history in honey is repeating for Graham Manning, Harvey, who hopes it will help erase a sour taste left by a forced departure from the dairy industry last year.

Fourteen months ago Mr Manning, a fifth-generation dairy farmer, had 700 of his own cattle on his 283 hectare farm, including a milking herd of 350 Holsteins producing close to 10,000 litres a day of award-winning, grade-one milk.

Two weeks ago when Farm Weekly visited, most of the 350 cattle on the Manning farm were beef cattle owned by Harvey Beef, along with his 40 dairy heifers.

Reared last year during WA’s dairy crisis, the 13 to 15-month old and ready-to-be-mated heifers are the last residue of a Manning family history in dairying dating back to 1852 at Mounts Bay Road, West Perth.

The heifers are to be sold next week, ending that unbroken-until-now family connection with producing milk.

Quality, quantity, proximity to Perth and an important flatter annual milk production curve were reasons a previous Brownes Dairy managing director had approached him with a special farmgate price offer and locked him in for four years with a contract as a supplier.

But none of that mattered on September 30 last year.

Brownes exercised a clause in the contract that, had it been under today’s revised regulations, might have drawn a query from the Australian Competition and Consumer Commission on unfair terms and conditions.

Although Mr Manning claims he was committed for four years by the contract, Brownes could review its position after two years under its terms and it decided it did not want his milk, or that of a total of four other farmers on similar special contracts.

It was a good year last year, particularly the spring when cows on rich pasture produce more milk, and Brownes claimed it had too much.

The decision to drop him was devastating for Mr Manning and his wife Jayne.

Suddenly they had no farm income and no way of servicing a substantial loan – they had invested in upgraded dairy plant and equipment to produce cold fresh milk by 7am every day when the Brownes’ tanker called.

The dairy plant is still there, maintained and in perfect operating condition – started up and run once a month – and, should prospects in the WA dairy industry improve, Mr Manning hopes eventually to sell the dairy, plant and equipment and a portion of his land laid out for dairy farming, as a ready-to-go concern.

He has accepted that he is out of the industry after 41 years and, in his own words, he has “moved on”.

“We tried to keep going, it wasn’t our choice to leave the industry but after three and a half weeks we were tipping milk out, there was no one to take it,” Mr Manning said.

“We thought what the hell are we going to do now?”

His first priority was to sell the milking herd to clear the debt.

Fourteen cows were exported to China but 230 of his herd went to another dairy farmer 160 kilometres further away from Perth and are still providing milk for Brownes today.

Mr Manning’s next priority was to generate some income.

He approached Harvey Beef general manager livestock Kim McDougall with a proposal to background their young cattle on his pasture.

The Manning family had dealt with Harvey Beef over a long period and as all of his cull cattle over the years had been sold to Harvey Beef, there was mutual respect.

“We talked to Kim and he said the business was trying to get something like this backgrounding going with local farmers,” Mr Manning said.

“I think they appreciated what we had, as dairy farmers we look after our grass well and it gives them the opportunity to fatten some cattle.

“We started in February, since then we’ve had over 700 of Harvey Beef’s animals on the farm, there’s two herds here now.”

Mr Manning is paid for every kilogram of weight he can put on the cattle – they come onto his farm weighing 300-340kg and leave weighing about 440kg usually after about 100 days, but lighter steers stay longer.

According to Harvey Beef livestock buyer Campbell Nettleton, who was inspecting the cattle on the day Farm Weekly visited, from the Manning farm the cattle go to feedlots for another 100 days where they are grain fed and then supply Harvey Beef’s premium 100-day grain-fed beef program.

“The Manning family has dealt with Harvey Beef for a long time and Graham knows livestock, he knows how to grow good grass and he’s just up the road,” Mr Nettleton said.

Mr Manning is proud of the association with Harvey Beef.

“We have our name on that animal as well as the feedlot, it’s on the (product) barcode that it was grass fed here before it was grain fed,” he said.

“Backgrounding cattle has been able to give us some income which is the key.

“We really appreciate what Harvey Beef has done for us in trying to provide us with an income, because Brownes didn’t give a stuff about us,” Mr Manning said.

He has since also invested in the future on another area of his farm.

Four months ago 20ha of sand country at the back of the farm – it was burnt out in the fatal Yarloop bushfires last year which, on a wind change, burned back to threaten Harvey – was planted with 30,000 Leptospermum Scoparium seedlings, commonly called Manuka tea tree.

The Manning have joined with ManukaLife Pty Ltd and another farm at Cookernup in a Manuka medical honey project which they hope will begin paying off in three years’ time.

MGO is converted from an enzyme in Manuka nectar called Dihydroxyacetone (DHA).

But limited nectar supply is preventing widespread application in the medical sector alongside development in the cosmetic, nutraceutical (dietary supplements and food additives) and pharmaceutical industries, according to ManukaLife.

New Zealand is a global supply leader but has problems with bee disease and WA could rapidly overtake it as a major source of medical grade Manuka honey, said ManukaLife managing director Paul Callander.

“It’s an export industry, the medical company we are talking to are considering manufacturing here,” Mr Callander said.

“At the moment they ship containers of honey all the way from New Zealand to England and manufacture on a pound-based exchange rate and ship it back to Asia to sell.

“So if we can supply sufficient high-quality and secure honey, they will put the (processing) plant here,” he said.

Mr Callander said he was talking to medical companies that wanted “hundreds of tonnes” of Manuka honey to meet growing demand for natural remedies.

Even with a small loss of plants caused by low-lying land being flooded, Mr Manning’s 20ha should be capable of producing 70kg a hectare harvested once a year by a contracted beekeeper who places hives in the paddock, he said.

The volume of harvested honey will be measured, sent to a Queensland university for testing and grading, then “mapped” against a published price list with ManukaLife, the beekeeper and Mr Manning’s sharing the profits.

The aim is to develop new high-producing DHA and MGO Leptospermum varietals that flower for longer periods to maximise honey production and also to develop varietals which can survive in drier climates like the Wheatbelt.

Mr Manning has eight varieties of Manuka tea tree planted in his paddock, each flowering at a slightly different time, with the aim of extending the honey-producing flowering period from July through to the end of February.

“They’re looking pretty good and we’ve had some flowers already this year,” he said of his seedlings.

“This time next year they’ll be half a metre high and more.

“This was our run-off block where we kept the cows when they dried out, the cattle used to love it out here in the winter time.

“It was where we tried to make a stand against the bushfire last year, this was all burnt out.

“We slashed and sprayed it all out twice before we planted the seedlings so there’s been a bit of work in it so far.”

Alan Ottrey, one of Mr Manning’s farm workers and dairy hands he has been able to retain, is managing the fledgling tea tree plantation.

He employed his three young sons and a mate to help fertilise the seedlings, but the tea tree is a hardy pioneer species that needs little care, has a life span of 20 years or more, and the farm’s resident kangaroos and emus, plus cattle, will not eat it.

Mr Manning said he might be trimming the tea tree plants and producing tea tree oil from the prunings.

“We might get two income streams out of this,” he said.

It is another avenue ManukaLife is exploring with a Californian company.

While he admitted to knowing nothing about producing honey, Mr Manning said his grandfather on his mother’s side had been an apiarist and had come to Harvey from Bathurst, New South Wales, in 1895 looking for a place to set up hives.

“They sent him out to dense bush off Forrest Road, which is where Jayne and I now live, not where the dairy is,” he said.

“As a consequence we still have the beehive paddock and the honey house paddock on that property, named after that era.

“Then dad came home from the war and he bought the (adjacent) farm where we are now and he had bees as a young man.

“I’m sort of coming back to bees to complete the circle.”