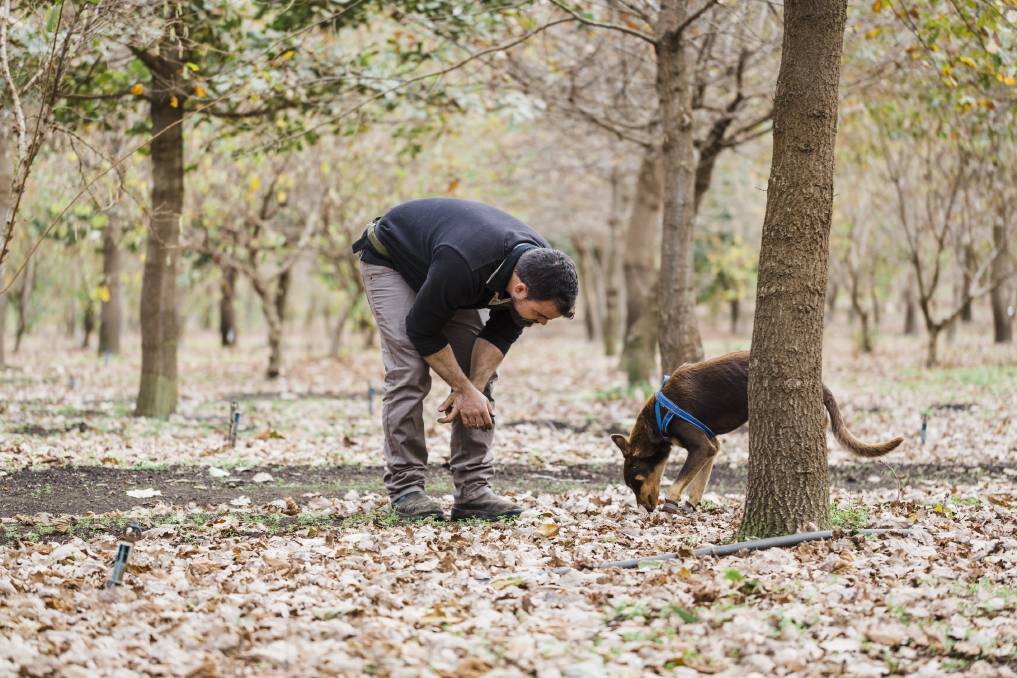 Specially-trained truffle dogs are used to locate the gourmet delicacy when they are ready to harvest. All photographs by Jessica Wyld.

SO, you may ask, what is all the fuss about truffles? And by truffles, we’re not talking about the small, round, sweet chocolate variety that feature prominently around Christmas time.

SO, you may ask, what is all the fuss about truffles?

And by truffles, we’re not talking about the small, round, sweet chocolate variety that feature prominently around Christmas time.

We’re talking about the mysterious earthy pieces of fungi that have been increasingly featured on the Australian culinary scene over the past couple of decades, and are renowned for their scarcity and unique aroma, as well as their hefty price tag.

Well, it turns out that they grow really well in the south west of WA – so much so that around 70 per cent of the total annual Australian truffle exports are now supplied from producers around Manjimup and neighbouring towns Pemberton and Northcliffe.

Formerly renowned for its timber industry, the Southern Forests region, with its picturesque karri trees, is building a reputation as a food bowl, producing a whole range of amazing agricultural products including world-class wines.

But it is the staggering success with which truffles have been cultivated over the past 20 years, to the point it is now the biggest producing region in the southern hemisphere, that has helped to shine the spotlight on the region, some 300 kilometres south of Perth.

It is fitting then that they are the headline act at an annual winter festival created in their honour.

The eighth annual Truffle Kerfuffle is to be held at Manjimup from Friday, June 22 to Sunday, June 24, coinciding with the truffle harvest.

According to the Australian Truffle Growers Association (ATGA), truffles are a fungus and grow under the ground as a result of a symbiotic relationship with the roots of particular trees, such as oaks and hazelnuts, infected with the appropriate mycorrhiza or fungus root.

The truffles form in late summer, slowly maturing during autumn before being ready to harvest in winter, when specially-trained truffle dogs locate them by the scent they emit when ripening.

The ATGA said truffles had been consumed for more than 3000 years and, as they are native to the south west of Europe, France has led the way in modern times for growing and also incorporating them into their cuisine.

Production of the black or Perigord truffle (Tuber melanosporum) in the southern hemisphere began in New Zealand in the late 1980s as a government initiative, and work in Tasmania quickly followed.

It was in 1997 that the first commercial crops were planted around Manjimup, which were then harvested in 2003.

As has been the case with producing wines comparable with those from the great wine-growing regions of France, the climate around Manjimup proved to be suitable for successful truffle production, along with the rich karri loam soils.

And as the gourmet delicacy is best consumed fresh, the roughly seven tonne of winter southern hemisphere crops are able to help fill demand, while the northern hemisphere is in its summer period as around 90 per cent is exported, finding their ways into the kitchens of world renowned chefs including Heston Blumenthal from The Fat Duck and Brett Graham from The Ledbury, who describe Australian truffles as “amazing” and “outstanding” respectively.

For Truffle Kerfuffle president Jeremy Beissel, the festival has emerged as a great way of showcasing the region, not only for its truffle production, but also as a horticultural wonderland.

The owner of iconic local business Fonty’s Pool Chalets and Caravan Park, it was Mr Beissel, Al Blakers of Manjimup Truffles and Gavin Booth, now of Australian Truffle Traders, who hatched the plan for the festival in a shed at Mr Blakers’ property over a few beers back around 2010.

“We thought that, coming out of the decline of the timber industry, the truffles were a unique product that could help to shine the spotlight on Manjimup and showcase the plethora of agricultural products that are found in the region,” Mr Beissel said.

Financially backed by Mr Blakers, the first festival was a very simple, humble one-day event in 2011 of demonstrations and a small market, attracting less than 1000 people.

Fast-forward just seven years to 2017 and the Truffle Kerfuffle was a three-day festival attracting more than 5000 participants, which resulted in more than $2.1 million in economic impact for the region, and more than $2m in earned media exposure, based on estimated advertising value.

It has been touted as one of Australia’s best food and wine festivals in Australia by popular travel guide QANTAS AWOL.

Planning is well underway for this year’s event, which is expected to be even bigger and better than before.

The heart of the Truffle Kerfuffle will once again be at the Fonty’s Pool Chalets and Caravan Park, just south of the Manjimup townsite, when it is transformed into a festival village for the weekend.

Patrons will be able to purchase an all-weekend ticket for the festival village, with children aged 15 and under admitted for free, and explore on either or both Saturday and Sunday between 10am-5pm, where they will find a gourmet marketplace, pop-up dining, family activites, live music, truffle dog demonstrations, and cooking demonstrations and much more.

Those who do attend the 2018 Truffle Kerfuffle are sure to have access to the premium product, known for its unique and indescribable aroma, fresh out of the ground, as its picking season runs from June to August.

Mr Beissel said he was a big fan of truffles, of which the smallest amount could transform a dish.

“They’re not well-renowned for no reason, although they can be prepared badly,” he said.

“If they are picked at their prime, and then prepared by someone who knows what they are doing, there’s nothing quite like them.

“The taste explosion they can create is indescribable.”

That sentiment was echoed by Russell Blaikie, head chef of renowned Perth restaurant Must Winebar, who attended the 2017 festival.

“Truffles can be tricky to use, they are delicate, so their aroma can be lost in a dish if incorrectly prepared, but when their sensually pungent funk is highlighted, the sensory experience of tasting truffle becomes mind-bending, decadent and joyous, all at once,” he said.

“I was fortunate enough to be invited to the dinner where our first WA truffle was served, a defining moment in WA’s culinary history and a meal that I’ll never forget.”

Despite the truffle being the third most expensive food in the world, regularly attracting prices around $2000 per kilogram, Mr Beissel said the Truffle Kerfuffle was not a high-end event just for the wealthy.

While people could choose to add-on to their festival weekend pass by booking additional experiences including going on truffle hunts, taking part in intimate masterclasses in the Chef’s Cabin or attending sessions in the wine shed, there were still plenty of relatively inexpensive opportunities to buy small pieces of truffle or food containing truffle in the marketplace, as well as many free cooking demonstrations and even a free truffle dog demonstration.

Other dining events scheduled over the weekend include a Feast and Fire Opening night on the Friday evening, which will feature live music, campfires, food and wine; the Hunter’s Breakfast; and A Winter’s Night on the Saturday evening, which promises to be a beautiful yet down-to-earth dining experience.

The Truffle Kerfuffle is owned by a not-for-profit association, and is overseen by a volunteer board, relying largely on the support of the local community, truffle industry and volunteers, while also supported by their strategic partner the State government through Tourism WA, which describes the event as the State’s premier winter festival.

Mr Beissel said the festival’s objectives were to drive brand awareness for Manjimup truffles and the region’s position at the heart of Australian truffle country, to deliver a positive economic impact for the Southern Forests region, to deliver a high-quality destination tourism experience, and to drive awareness for the Southern Forests region as a winter tourism destination rich in natural beauty, premium produce and hands-on experiences.

Mr Beissel said he and his fellow committee members could never have anticipated the rate at which the festival would grow, yet they were proud that at its heart it still retained the essence of their original plan- to create a unique food festival that promoted the region.

“It is all about showcasing the people, place and produce of the region at its best, from local truffle growers to farmer, winemakers and artisans,” he said.

“We’re incredibly proud that 90 per cent of the total value of all produce at the event comes from the Shire of Manjimup.”

And the flow-on effects of the festival certainly extend beyond Manjimup, with neighbouring towns able to offer accommodation and shuttle services in accommodating the influx of visitors to the region.

The Truffle Kerfuffle is also helping local producers to connect with visiting chefs, who are then forming partnerships.

For example, last year Mr Blaikie met Carlo Pessotto from Karri Country Gourmet Potatoes, and now he has included their potatoes on his menu.

Also, last year Paul West from SBS program River Cottage Australia visited local truffle growers and farmers as well as schools, where he talked to students about the region’s produce and even did some cooking demonstrations.

Tickets for the 2018 Truffle Kerfuffle go on sale on Tuesday, March 20 at trufflekerfuffle.com.au

People unable to attend the festival, or who would like access to truffles at other times of the year, can always visit local businesses the Truffle and Wine Co, or Australian Truffle Traders.

Including WA’s first truffiere, which has since become the world’s biggest single black truffle producer, The Truffle and Wine Co is home to The Truffle Kitchen, which specialises in truffle-inspired food and wine pairings, and is open seven days a week from 11am-3pm.

They also offer opportunities for visitors to book and go on a truffle hunt during the harvest period, as does Australian Truffle Traders.