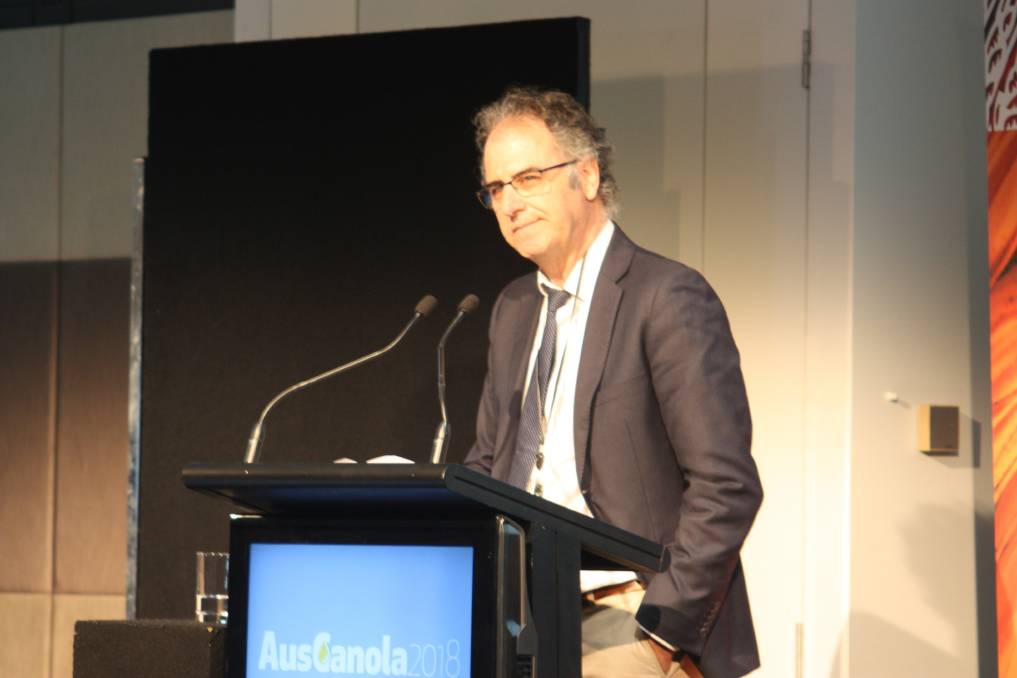 THERE is significant potential upside for canola production in WA thanks to developments in genomics and the decreasing cost of advancing genetic technology.

THERE is significant potential upside for canola production in WA thanks to developments in genomics and the decreasing cost of advancing genetic technology.

That was one of the key themes heard by those at the 2018 AusCanola conference in Perth last week, who gathered for the 20th Australian Research Assembly on Brassicas.

The Grains Industry Association of WA (GIWA) estimates close to 1.9 million tonnes of canola will be produced across the State this year, accounting for 13 per cent of WA’s total crop.

Going on current trends, about 20pc of that will be planted to genetically modified (GM) Roundup Ready (RR) varieties, with most of the remaining 80pc planted to triazine tolerant options.

“There’s been an increasing rate of average yield improvement, particularly in WA, where the average yield has gone from 0.9 tonnes per hectare to about 1.4t/ha,” Mr Sweetingham said.

This included the mapping of the canola genome sequence (Brassica napus) in 2014 and CRISPR gene editing technology developments.

“Genomics is allowing us to edit specific points on genes and we don’t have to go through the whole genetic modification anymore so we can now pinpoint targets on genes – it’s much quicker,” Ms Batley said.

“Essentially it means that you can have two lines that are exactly the same apart from just a snip in these two genes to see what that does.

“You can have continuous editing and evaluation to look at that impact and see what’s most beneficial.”

Ms Batley said these developments, combined with the use of new genetic technology, meant conducting canola research and analysing individual canola plants had become a much more simple task.

“Technology has moved on phenomenally since it all started,” Ms Batley said.

“We are at a point where we can sequence the genome (with portable DNA sequencer) and connect it to your laptop and you can take it out to the field and do it in real time.

“And now they’re building these machines that will even connect to your smartphone.

Ms Batley said the ability to conduct genomic analysis had also become a less costly-task, thanks to the development of more accessible, cheap technology.

She said this was encouraging more research and leading to further genetic discoveries.

“For just a few hundred dollars it’s possible to sequence different plants – and possibly even less because we don’t need that much coverage – so we don’t have to rely on that old technology,” Ms Batley said.

“The cost of genome sequencing coming down means that we can also look at doing a lot more genomics in the world relatives, they’re not so inaccessible anymore.

“If the technology has moved on this much since I’ve been working in it, I can only think what will happen in a few years and how we’ll be able to apply it even more.”

He said this should allow WA’s linear progression in yield increases to continue.

“I think the advances in genomics, the ability to be able to unwrap the canola or the disease genome and understand it at that very granular DNA level and then use the emerging technology to work with those is really a big thing,” Mr Goddard said.

“There’s obviously regulatory issues that we need to address around that but I think that provides a lot of bright lights for the industry.

“I’d like to think that we will see continued development in disease management which will impact yield, drought and stress tolerance which impacts yield and then genetics improving the yield generally.”