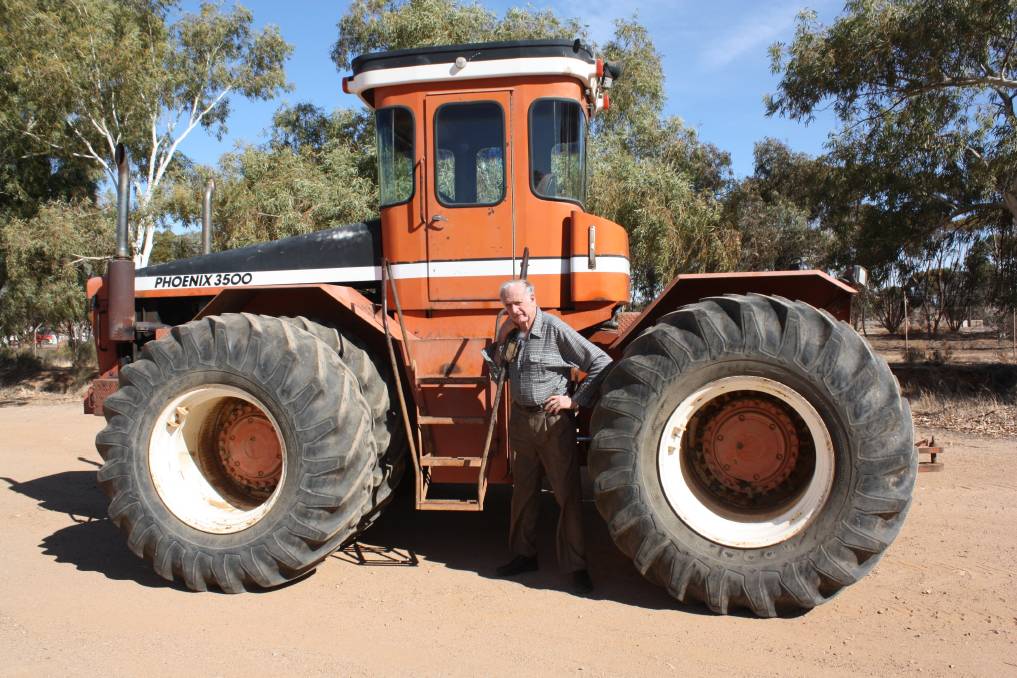 IT was an eagerly awaited interview with Merredin manufacturer Laurie Phillips recently.

IT was an eagerly awaited interview with Merredin manufacturer Laurie Phillips recently.

Having been told he had bought a 3500 Phoenix 4WD articulated tractor, Torque’s mind went into overdrive flooded with the who, what, where, when, why and how questions.

And knowing Laurie had designed the Phoenix, added a little icing.

T: Where did you get it from?

LP: A couple of farmers south of Hyden.

T: Who were they?

LP: I was driving to Esperance with my grandson and saw it parked in the open. So I stopped and had a look at it. I could tell it has been well looked after so I left a note saying, “if you want to sell this, give me a call”.

A couple of years later, I got the call and I bought it.

LP: I just wanted it.

T: What do you have to fix to restore it?

LP: Nothing. It was in working order when I got it and it was being used as the main tractor.

T: How many hours has it clocked?

T: What did you do when you got it?

LP: I just washed it down. There’s nothing on it that’s not original and the only blemish is a cracked windscreen.

T: And what are you going to do to it now?

LP: I’d like to strip it, sand blast it, re-condition it and paint it. It will be a future labour of love for me when I’ve got some time. Jump up and let’s go for a drive.

It took an instant for the V10 423 Mercedes motor to fire up and we were off as Laurie expertly worked the hand throttle, with the writer comfortably sitting in a “buddy” seat in the spacious cab which would rival today’s modern tractors.

Laurie’s penchant for sourcing the best components was clearly evident with the smooth Twin Disc 12-speed powershift transmission having a top speed of 17 kilometres an hour – which was fast enough, hooning around outside the distinctive Phillbourne shed in a tractor still capable of pulling an air seeder.

“I don’t know the hydraulic flow but it’s got eight remotes and it would have no difficulty pulling an air seeder,” Laurie said.

In its day, as the flagship of the then Farmers Tractors Australia company, it competed mainly against popular tractor brands such as Steiger, Versatile, John Deere, Case/White, Massey Ferguson and International.

The Acremaster – there are still models being used today throughout Australia – was highly regarded but the tough 1980s was not kind to budding manufacturers and Laurie remembers his company “biting the dust” as he lost control to other business interests.

In 1987, his resolute and never-say-die attitude saw him re-emerge from the ashes, so to speak, with an appropriately-named Phoenix tractor, based on the Acremaster design.

The Phoenix was named after the Greek god which gained new life by arising from the ashes of its predecessor.

Laurie gained support from a group of local farmers who were keen to maintain a tractor manufacturing business in the town and so, the Farmers Tractor Company was formed with the Phoenix as the flagship product.

Laurie also invented the Phoenix harrows which were also sold by Farmers Tractors Australia until the company was dissolved in 1992.

In that year, Laurie formed Phillbourne Manufacturing (now re-named Phillbourne Merredin) and concentrated on canola pick-ups, first building the Canadian-designed Swathmaster under licence and then designing his own, called the Rollerdown pick-up front.

Two years ago he introduced the Retro Feed Drum to the market as a retro-fit for draper fronts.

This unit is designed for new model fronts from John Deere, Midwest CNH, Honey Bee and older MacDon models such as the 2052.

“We’ve had a great response to the Retro Feed Drum,” Laurie said.

“We put a few out for testing last harvest and farmers and dealers gave the unit the thumb-up.

“We got a lot of comments about the ability to harvest faster in canola, tall barley and wheat and one farmer told us the Retro Feed Drum was like having a second harvester in the paddock.

“We believe it is the cheapest way to increase harvesting capacity while eliminating a lot of hassles associated with poor crop feed due to drum malfunctions and breakages.”

According to Laurie, a dealership network has been established in South Australia, Victoria and New South Wales for the unit which was re-modelled from his popular Rollerdown drum.

The last burning question relates to the Acremaster.