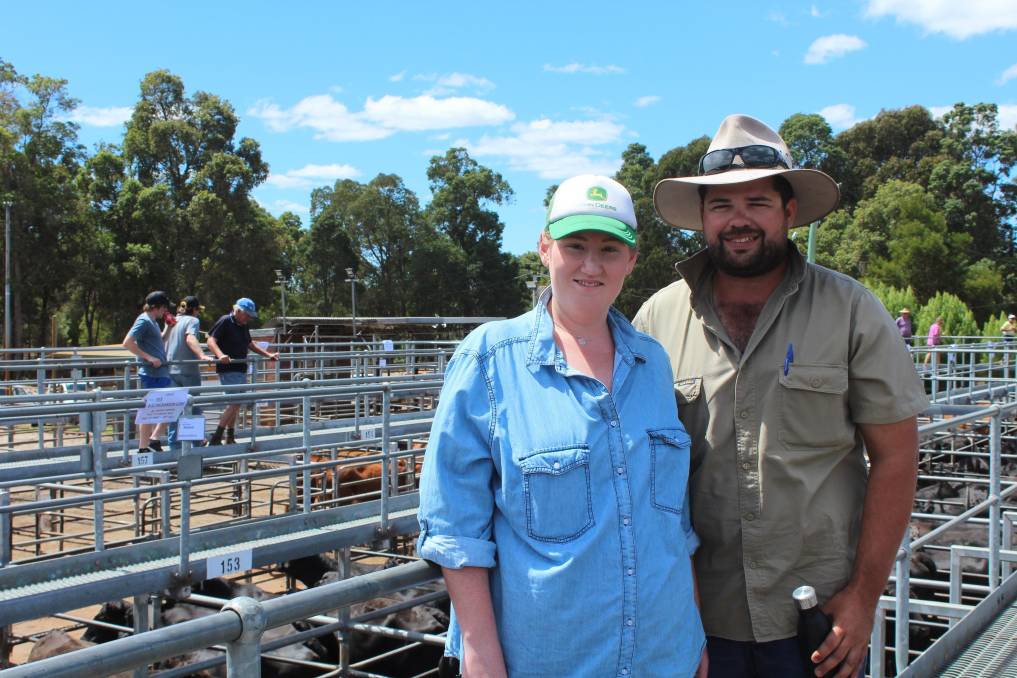 A LARGE mixed offering of cattle attracted a gallery of buyers to last Friday’s Landmark store cattle sale at Boyanup.

A LARGE mixed offering of cattle attracted a gallery of buyers to last Friday’s Landmark store cattle sale at Boyanup.

With 1276 head offered, there was something for everyone and like in previous sales agents, lotfeeders, live exporters along with a select few graziers, secured the yarding.

The heavier weight Friesian steers selling liveweight topped at $1414 and 268c/kg, while those selling appraisal made up to $750.

The liveweight beef steers reached heights of $1331 and 346c/kg, while the sizeable penning of good quality beef heifers sold to a top of $1366 and 328c/kg.

The lighter weight appraisal Friesian steers made returns of $750, while the few lines of first cross heifers also topped at $750.

The substantial offering of mated beef heifers reached $1500 while mated cows and cows with calves at foot sold to a $2350 top when a small female reduction sale was had.

The top-priced draft of 13 black and whites from Double Creek Farm, Waroona, weighing 528kg were snapped up by Kookabrook Grazing Company, Dardanup for $1414 and 268c/kg.

From Rival Pty Ltd came seven Friesian steers weighing 562kg that were swiftly secured by Kookabrook for $1315 and 234c/kg.

The following draft of 16 presented by the Maughans made $1139 and 200c/kg when they weighed 569kg and were also knocked down to Mr Jones.

Another severn Friesian steers were put forward by Rival Pty Ltd weighing 573kg that were quickly secured by Mr Jones for $1214 and 212c/kg, while the J & C Fiorenza, Hamel, yarding of six Friesian steers weighing 461kg were purchased by Landmark Waroona agent Richard Pollock who paid $1060 and 230c/kg.

Four Hereford steers weighing 466kg from J & C Fiorenza caused a stir and were bought by Kookabrook at $1268 and 272c/kg, while regular buyer Kevin Armstrong, Willowbank Agistment, Benger, liked what he saw in the offering from Stirling Brothers, Pemberton, with 10 Charolais cross steers weighing 411kg for which Mr Armstrong paid $1267 and 308c/kg.

Mr Armstrong went on to secure a dozen blacks weighing 411kg for $1267 and 308c/kg when P & A MacLeay, Abba River, nominated them.

The MacLeays noted 12 of the same kind averaging 431kg and selling for $1251 and 290c/kg when also purchased by Mr Armstrong.

Charles Hull Contracting, Waroona, had a few drafts of Angus steers on offer that topped at $1254 and 274c/kg when Mr Pollock secured seven weighing 458kg.

Hitting 346c/kg was a line of three Angus cross steers weighing 210kg nominated by TC Cooper & Son, Boyanup, when they were snapped up by Mr Pollock at $727.

Just as with the beef steers, Kookabrook was also active in the beef heifer line-up and paid a top of $1366 for four Charolais cross females from GR & CA McDonald, Waroona.

The 517kg heifers returned 264c/kg and shared the truck with eight Marowga Pty Ltd, Mandurah, heifers weighing 490kg when they were also purchased by the Dardanup company at $1294 and 264c/kg.

Mr Jones noted down five 379kg Angus heifers when they were offered by RL Beacham & Sons, Pinjarra, and paid $1076 and 284c/kg for them.

It was a draft of 15 young Friesian steers that reached heights of $750 in the appraisal section of the store sale.

Mr Lofthouse didn’t stop there but purchased 13 lightweight Friesians from RA Gwynne, Northcliffe, for $750 and a single Montbéliarde steer by Kelly-Brae, Gelorup, at $745.

There was a good selection of mated beef heifers up for grabs with the tops reaching $1500 when Landmark Williams agent Ben Kealy supported the Yackaboon Contracting, Williams, yarding of Angus females.

A pen of seven, along with a pen of six were purchased by Mr Kealy for $1500 each, while AL Harris, Cundinup, liked six Murray Greys from Yackaboon and paid $1400 for them.

Mr Pollock, who was a major buyer in most classes of cattle also secured five Angus heifers nominated by Salom Brothers, Brunswick, for $1220, while Mr Gardiner purchased the only two lines of seven first-cross heifers from the Tartaglia family at $900 and $750 respectively.

There was a number of mated cows and cows with calves at foot up for the takings.

The feature was the White Valley Red Angus small reduction sale which resulted in a single black female with a calf a foot reaching a $2350 high.