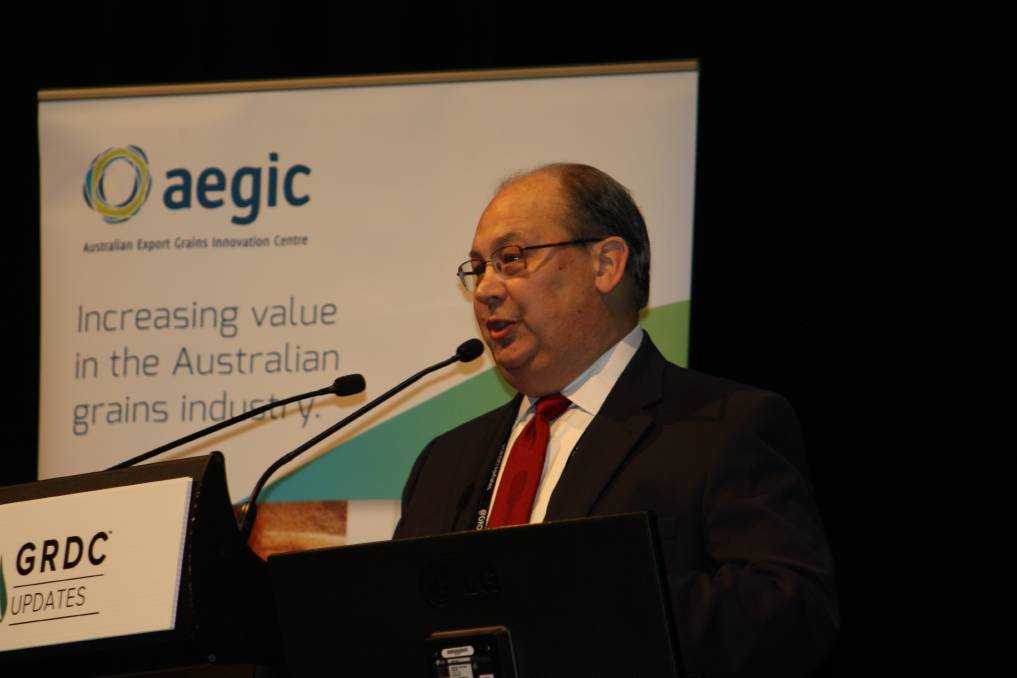 US Wheat Associates president Vince Peterson believes prospects for Australian and American wheat producers in their respective key markets are positive, despite growing competition from the Black Sea region.

WHILE increased wheat production out of Russia is edging in on Australia’s market share in key Asian markets, the competitive threat out of the Black Sea region may not be as pervasive as feared.

WHILE increased wheat production out of Russia is edging in on Australia’s market share in key Asian markets, the competitive threat out of the Black Sea region may not be as pervasive as feared.

That was the message from US Wheat Associates president Vince Peterson, who discussed the outlook for the world wheat market at the Grains Research and Development Corporation’s Research Updates, Perth, last week.

Russia has seen a major boost in wheat production over the past five years, rising to a record 85 million tonne harvest in 2017.

Mr Peterson said Russia had also presented a large threat to US markets, and resulted in a major change in US wheat export distribution over the past three decades.

Thirty years ago 30 per cent of the US wheat crop was exported to the Middle East and North Africa, while 6pc was sold to European customers.

Fast forward to 2016-17 and just 14pc of exported US wheat is distributed to those regions, accounting for 4mt of the average 29mt exported.

Mr Peterson said major US customers were now primarily based in Latin American and Asian markets.

“We’ve lost almost 5mt in annual export sales just to the country of Egypt, let alone all of the others and that’s largely, 100pc due to the Black Sea,” Mr Peterson said.

“There are the occasional spikes, you see the odd year where you do much better and you’ll see the same in the Australian export picture, those are the years when something happened in Russia.”

However, Mr Peterson said while increased production out of Russia was hurting both US and Australian exporters, there were several reasons he did not expect the threat to be ongoing.

He predicted Russian farmers to follow in the footsteps of their Ukrainian counterparts, and focus on higher value crops.

“What is happening in Ukraine I think is the future for Russia, Ukraine wheat land area has not increased over the past 27 years,” Mr Peterson said.

“What has increased is the corn planted area and their basket of oilseed crops – soybeans, sunflower seeds and canola rapeseeds – they’ve increased those land areas by 11 million hectares over the past 15 years.

“If you’re a farmer in Russia and you put all of this money, all of this investment into equipment, land, infrastructure and now you’re looking at the next 10 years, you’re looking at crops thinking about what is the most profitable thing to produce on that farm with the best marginal income you can produce, it’s probably not going to be wheat.”

In addition, Mr Peterson said it was unlikely that ideal climatic conditions would remain consistent in the Black Sea region as they had in the past five years.

He said favourable weather throughout the Russian growing season had played a major role in its significant production boost.

“What I see is a couple of years of anomalies – without any really different changes in environment or anything else – they’ve had five consecutive record or almost record years,” Mr Peterson said.

“Their yields far exceeded anything that they’ve ever had in the past, is that because of great farming practices and technology – no – they’ve just had five years of exceptionally good weather that put all of this extra wheat into the market place right now and you’re seeing the pressure in Indonesia and the places that we’re all feeling.”

With supply out of Russia likely to steady, Mr Peterson said demand from several neighbouring markets would increasinly dictate exports out of the Black Sea.

With a predicted population boost of 1.3 billion people by 2050 in the Middle East and Africa, he expected exporters out of the Black Sea to turn their focus to customers closer to home and away from more distant markets in South East Asia.

“The Middle East and Sub Saharan Africa, that takes up 82pc on a five year average of Russia’s exports right there in their backyard,” Mr Peterson said.

“It’s a huge market, if you look at the population potential growth for that market for them looking forward, if you extrapolate that out, that’s 60mt more tonnes of wheat consumption within that environment.

“That means trade is going to increase by at least 50mt into those regions.

“I think Russia is going to be fully occupied supplying that market in the next 10 to 20 years and their need to go expeditionary out to South Asia and to Mexico, and to all of the places they’ve been in recent years, (will decrease) because price is not going to be necessary moving forward.”

“That’s all of a sudden a pretty big breather, a pretty big insulator between that demand in Africa that will take care of their supplies and their ability to bring across the Indian Ocean.”

Combining all of these factors, Mr Peterson said there was plenty of reasons to be optimistic about Australia’s wheat trade opportunities into the future.

The US Wheat Association president said he was hopeful the wheat trade climate would improve in favour of Australian and American exporters in the near future.

“I’m not as concerned about Russia in the long-term as I am right now in the day-to-day, year-on-year market place,” Mr Peterson said.

“I’m very positive about it from our producers standpoint – we’re on a little bit of a low right now with prices and returns but I think the future is pretty bright for those of you that are going to be in the business 10, 20, 30 years from now.”