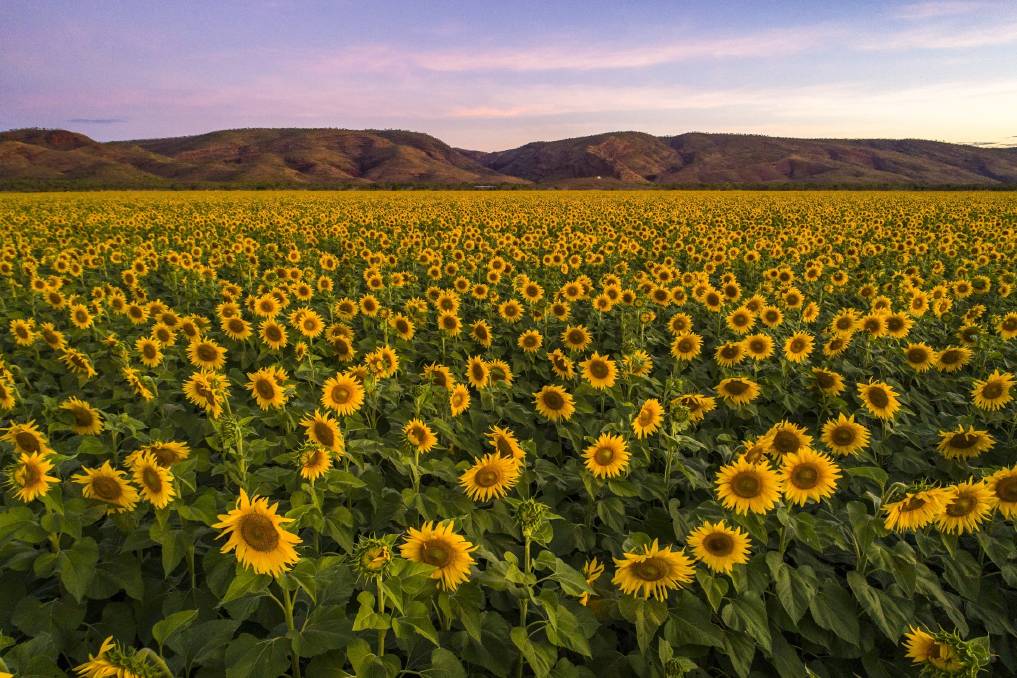 Matt and Melanie Gray’s property, Ceres Farm, was transformed by a sea of sunflowers this year, marking the first time they had grown the crop on the Ord River property. Photographs by Ben Broady.

AS they watch their three young sons splash around in a shallow waterway on their property in the Ord River region of the East Kimberley, Matt and Melanie Gray can’t help but think about what a different turn their lives could have taken.

AS they watch their three young sons splash around in a shallow waterway on their property in the Ord River region of the East Kimberley, Matt and Melanie Gray can’t help but think about what a different turn their lives could have taken.

The couple run Ceres Farm near Kununurra, in the far north of the State, set in the beautiful, rugged Kimberley ranges, where they have just completed their seventh season producing a variety of horticultural and broadacre crops by both service and trickle irrigation.

But it wasn’t that long ago there was the very real prospect that the second-generation farmers would make their lives as wheat and sheep farmers in Merredin.

Melanie, herself a Kununurra local, was studying at university in Perth while Matt was working on the family farm.

The lure of unlimited fresh water drew them to the north of the State, back to Melanie’s hometown where her family was still farming.

Matt, a qualified diesel mechanic, found a job working for a local grower and trialled a different style of farming to that which he had grown up with.

As fate would have it, the property came up for lease in 2011 when its then-owners decided to move to New South Wales.

Melanie said it really was a sliding doors moment – on one hand she and Matt had plans to further travel and see the world, but on the other hand they had an opportunity to secure their future.

So, with the support of Melanie’s parents, they took over the 350-hectare property on Packsaddle Road, about 15 kilometres from Kununurra.

“It all happened by chance – sometimes opportunities come up, and you just have to take them,” Melanie said.

Ceres Farm had been operating on the rich, fertile Ord River property since 1994, and with very little experience Matt and Melanie decided to stick with the former owners’ processes and crop rotations initially while they found their feet.

That meant continuing the horticultural crops of watermelon and pumpkin varieties including butternut, Japanese and grey, as well as growing some broadacre crops such as chia, sorghum and chickpeas.

As well as receiving support from her parents and also her brother, Melanie said they were fortunate to have knowledge passed on from the former owners.

“When we first took over I spent many hours a day on the phone asking them questions, and their advice and support was invaluable,” she said.

“They were successful in what they did, so we were trying to change very little about the way we ran the property.

“Sometimes you will make mistakes and you will lose money, but we tried to minimise that by seeking advice.”

Melanie said the first few years presented a huge learning curve and a big financial outlay, but fortunately good yields and prices in their first year gave them a positive outlook going forward.

And if it wasn’t enough learning the ropes of a new business, Melanie and Matt welcomed their eldest son Lucas in 2012.

“I always wanted to have children young, and we were lucky things happened that way, but it was another challenge while we were trying to build the business,” Melanie said.

Melanie said a lot of hard work, along with luck, meant the business was going strong.

Her background in accounting had proven to be extremely helpful as she could calculate gross margins and complete end-of-year reports down to the last cent.

Similarly Matt’s background as a diesel mechanic meant he was able to fix problems with machinery straight away and could be more efficient with his time.

“As farmers you have to wear lots of different hats, but there is no doubt our respective qualifications have helped in running the business,” Melanie said.

So rather than making a life out of growing wheat or barley, Matt and Melanie have learnt what is necessary to grow a good crop of chia seeds or the sweetest watermelons.

And rather than watching the satellite forecasts waiting to see whether there is any rain on the horizon, the Grays are fortunate to have access to water through the Ord River Scheme.

Crops, which vary on seasonal supply and demand, are watered via surface irrigation, where the gates are opened and water trickles down via gravity and siphons into the furrows, before flowing back into the river.

The water use is monitored and is tested before and after flowing through the property to ensure limits are met.

Depending on the crop, this is done anywhere from a seven to 14-day cycle.

“We are so lucky with the water we have, because it is reliable and also pristine, which is reflected in the quality of the produce we grow,” she said.

The water supply was previously organised by the government, but is now run and organised by Ord Irrigation, who distribute water to the Ord Valley farmers.

This year Ceres Farm grew a crop of sunflowers for the first time, which Melanie said was one of the most beautiful crops she had ever seen, as well as surprising her by how quickly it had grown.

Harvest on the fertile lands, which also produces amazing crops in beautiful surrounds including fruits such as mangoes, bananas, rockmelons and limes, has recently finished after being ongoing since April.

This year they grew sorghum, maize, chickpeas, sunflowers and mungbeans as their broadacre crops as well as participating in cotton trials, something they last did back in 2011 and may repeat next year.

This varied to their 2016 crops, when they grew chickpeas, quinoa and chia.

“The crops that we grow depend on the particular year and the commodity prices, and of course supply and demand,” Melanie said.

This year was the first time since taking over the medium-sized property in 2011 that they didn’t grow the omega-3 rich chia seeds, which they have previously grown under contract for well-known Australian-based business The Chia Company, due to heavy international supply.

Produce from Ceres Farm, which is Freshcare accredited, has strict biosecurity and quality assurance systems in place and has 100 per cent traceability, is supplied to buyers in Sydney, Melbourne, Perth, Adelaide, Brisbane and Darwin.

Produce is picked and packed on the same day and trucked within 24 hours to ensure fresh, quality produce.

With the end of the harvest comes the annual full-scale review of Ceres Farm.

This includes every piece of machinery being inspected and wide-scale repairs being carried out, along with preparing the land with fertiliser for next year’s crops.

It also means Melanie has to pore over figures from the past few months, completing reports which examine the costs associated with growing the 2017 crops, the prices they were sold for, and their yields.

This in turn leads to planning for next year, making decisions on what crops they will grow and what quantities of seed they will need to order.

“The more prepared we are the better, as it allows us to have a good understanding of what our plans are for the year, and what changes need to be made from the previous year,” Melanie said.

And with the wet season upon them, they are preparing for plenty of indoor activities with sons Lucas, 5, Blake, 3, and Oliver, 1.