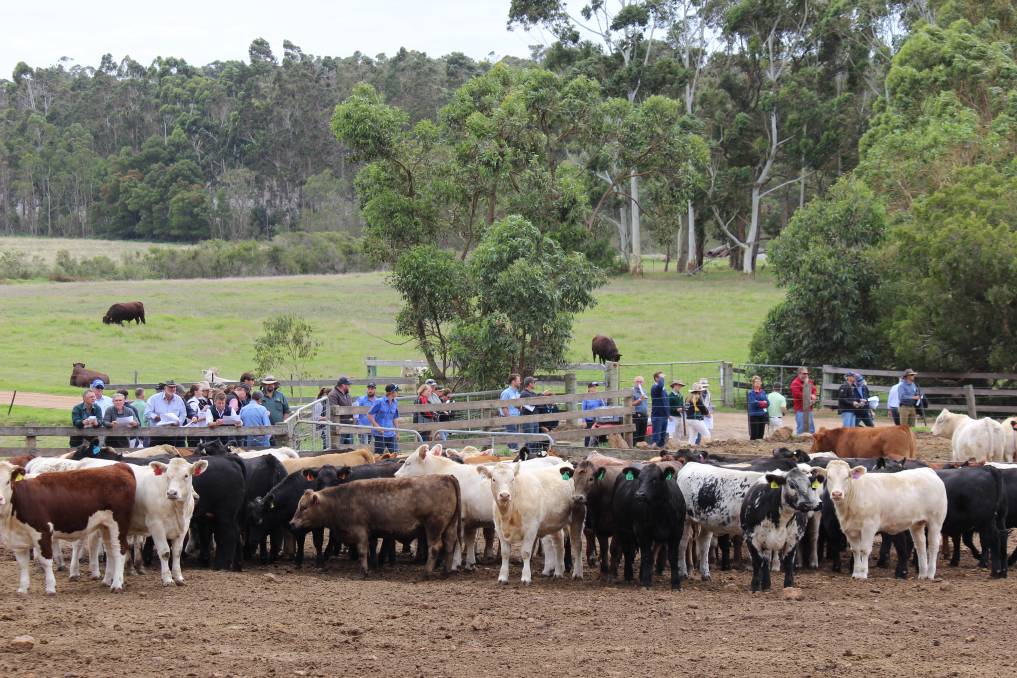 THE Harvey Beef Gate 2 Plate Challenge continues to go from strength to strength.

THE Harvey Beef Gate 2 Plate Challenge continues to go from strength to strength.

The event is only in its third year but the popularity of the unique chance the competition provides producers to benchmark the performance of their cattle against peers from across the State suggests the Harvey Beef Gate 2 Plate Challenge will be around for many years to come.

This year, 59 teams comprising of one heifer and two steers have been competing against each other in the Willyung feedlot since January 9.

Sandy Lyon, Willyung Farms, Albany, said he was really impressed with the performance of the cattle.

"The quality of cattle coming in at the outset was outstanding," he said.

"People entering their cattle this year really understood what we as lotfeeders are looking for in an animal.

"The performance of the cattle on feed has been fantastic."

"A lot of the steers are near the 500kg mark which says a lot of good things for them in the later stages of the competition," he said.

"They are doing very well."

The heifers average a weight gain of slightly less per head, per day, at just less than 1.6kg.

But there can only be one winner, and producers won't find out the results for a while yet.

At the most recent weigh in on March 17, the most impressive weight gain since induction to the feedlot was posted by the WA College of Agriculture, Denmark, with it's team of three Angus-Simmental youngsters.

Gaining an average of 150kg since going onto feed, the team also came in equal third overall for the heaviest average weight.

The local Charolais-Sussex team from Willyung Pty Ltd came in a very close second in the mid-way point weights, with an average weight gain of 148kg since entry to the feedlot environment.

There were a total of seven teams entered which achieved an average weight gain of more than 130kg since January 9, including Black Simmental-Angus crosses from Camden Hill Grazing, purebred Sussex from WA & DA Lyon, Charolais-Shorthorn-Red Angus composites from Culham Grazing and Gelbvieh composites from Summit Gelbvieh stud.

The heaviest team at the mid-way point of this year's competition was from Liberty Charolais, tipping the scales at an average of 524kg, posting a weight gain of 129kg since entry to the feedlot.

A total of 12 teams weighed in on March 17 at more than 490kg, including teams of Limousin, Angus, Charolais, Angus-Charolais cross, Angus-Simmental cross, Limousin-Angus cross and Charolais-Murray Grey cross to name a few.

Mr Lyon said he was happy all teams were working well towards the competition's target weight.

Royal Agricultural Society of WA president Rob Wilson officially opened the field day and said the competition was a fantastic opportunity for the beef producers involved.

"You can't manage what you don't measure," Mr Wilson said.

"As an industry, coming together in a competition like this to benchmark against your neighbours is vitally important.

"Markets are more discerning than ever, so it is crucial we work together as an industry to move towards the needs of our customers.

"Congratulations on getting involved and all the best for the competition."

In addition to the inspection of the cattle, the field day was jam packed with speakers, demonstrations, a charity auction, mini-competitions and a wide variety of display booths from sponsors to keep attendees entertained.

Platinum sponsor Harvey Beef was represented on the day by Kim McDougall, who thanked producers for their participation in the event.

"We thrive on WA producers and their quality of product, but we want to undertake the journey through the supply chain together.

"Hats off to you, the producers, because you're continuing to bring an exceptional product to WA consumers and you're working together to continually improve by getting involved in events like Gate 2 Plate - keep up the good work."

Mr McDougall also said he was looking forward to the following day with the Schools' Challenge portion of the Gate 2 Plate event.

"Supporting our youth in agriculture is crucial and Harvey Beef is very proud of supporting and encouraging our future," he said.