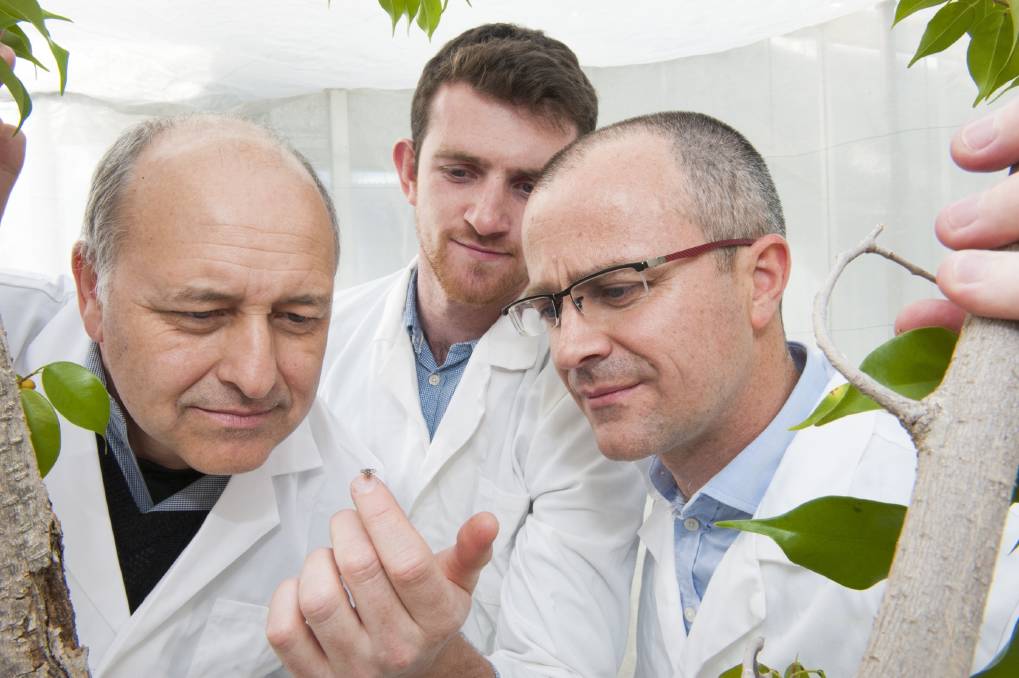 THE Office of the Gene Technology Regulator has been consulted about a possible field trial in WA sometime next year of a genetically modified (GM) biological insect pest control.

THE Office of the Gene Technology Regulator has been consulted about a possible field trial in WA sometime next year of a genetically modified (GM) biological insect pest control.

A field trial of Mediterranean fruit fly, known as Medfly, carrying a life span-limiting gene is the next step in a Department of Agriculture and Food WA (DAFWA) research project to disrupt the pest's breeding cycle.

Working with pioneer UK-based GM biological control researcher Oxitec, DAFWA in October last year imported half a millilitre of GM Medfly eggs which it reared into a colony of 2400 flies at a strictly quarantined section of its South Perth headquarters. The male Medflies carry a fluorescent protein genetic marker to identify them and a specific gene which, when they mate with wild Medfly, will pass on to female progeny.

The gene shortens the life of female progeny, causing them to die before they can reach maturity, mate and bury eggs under the skin of cultivated fruits and fruiting vegetables like tomato, cucumber and zucchini.

Normally after they hatch the Medfly larvae eat the ripening host fruit from the inside.

There are about 200 fruits, including stone fruits, apples, lemons, limes, pears, figs and loquats, the female Medfly will choose to pierce the skin of to lay her eggs.

The pest is found mostly in WA and is endemic in an area around Carnarvon, Dr Windsor said.

But the need to irradiate Medfly at the release point sometimes made it logistically difficult to use them and the radiation dose had an impact on stamina, ability to find a female and mating performance, Dr Windsor said.

Since June DAFWA researchers have conducted a series of glasshouse studies comparing the mating performance of the GM Medfly with that of SIT Medflies that received either light or heavy radiation doses.

"Research staff then had to collect each mating pair and check the male's genotype."

The test proved the GM Medfly was compatible with wild females, and in ability to compete with wild males to find a female and mate, performed comparably to a lightly irradiated Medfly in the relatively benign conditions of a glasshouse.

"We now need to consider how the new strain will perform under field conditions, a field trial is the next logical step."

Dr Windsor said discussion had been initiated with national regulatory bodies including the Office of the Gene Technology Regulator, Department of Agriculture and Water Resources which administers quarantine regulations, and the Department of Environment.

"We need to know what the protocols for conducting a field trial might be before we can determine whether running such a trial is feasible," he said.

Dr Windsor said discussions about a field trial could take up to 12 months to establish the parameters but he hoped the research team might have permission to conduct one at some stage next year.

Horticulture Innovation Australia is contributing to the cost of DAFWA's research.

Information about the glasshouse trial is on the DAFWA website agric.wa.gov.au/fruit-fly-trial-western-australia.

Oxitec, a research company originally spun out of Oxford University, is also working with authorities around the world in experimenting with gene engineering to disrupt the breeding cycle of a variety of insect pests.

These include cabbage moth or diamondback moth, stable fly, Asian fruit fly pest Drosophila Suzukii which has spread to Europe and North America in the past eight years and is proving resistant to insecticides, pink bollworm and mosquito.