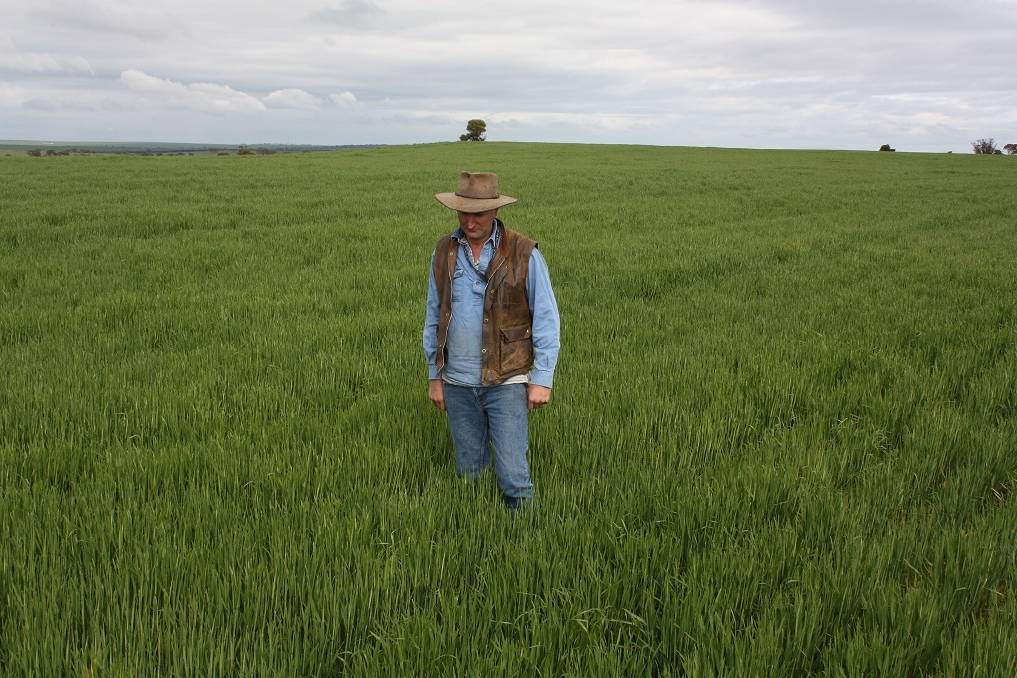 Kulin farmer Brendon Savage standing in a healthy crop of wheat growing on a ridge of typical ironstone country in a paddock characterised by under-performing crops.

THERE is a new word you can add to your farming dictionary. It's 'reefinate' and I predict it will be in common use within the next three years.

THERE is a new word you can add to your farming dictionary.

It's 'reefinate' and I predict it will be in common use within the next three years.

The word simply explains the act of crushing stones with an aptly-named Reefinator, made by Cutts Engineering, Manjimup under licence from its inventor, former Yuna farmer Tim Pannell.

The Reefinator is designed to dig up common laterite rock and crush it, to create topsoil which can be sown to crop.

My prediction is that even bank managers will know exactly what you are talking about when you explain to them the benefits of reefinating your unproductive country.

It's basically what Kulin farmer Brendon Savage did when he sought finance to buy an adjoining farm earlier this year.

"I told the bank manager I also wanted to buy a Reefinator because the property I wanted to buy had a lot of paddocks of ironstone ridges," Brendon said. "I told him I could bring that land back into production using the Reefinator.

"So factoring in the cost of the Reefinator, the numbers stacked up for the bank.

"The bank manager also saw the machine and was finally convinced by the logic of figures."

"But next year all we have to pay for is fuel and labour so if we do 500ha that's $100/ha as a one-off cost because once it's reefinated you never come back and do it again."

And that residual value becomes a substantive factor in a rise in value of the farm's productive worth.

"It amazed me how quickly we can turn the ironstone around and grow a reasonable crop on it."

Brendon also quickly realised the opportunity to spread 2.5t/ha of lime over areas he wanted to reefinate.

"We ended up going over the ironstone three times from different angles which meant we achieved very good incorporation of the lime as we went," he said.

"Typically when you start with the machine, you fracture the rock and on subsequent passes you go deeper to about 10cm (4in) which by that stage you're into dirt.

"And the fracturing continues through the dirt so you get a ripping effect in that subsoil.

"So we'll get moisture infiltration and over time we'll start to improve organic content as roots get in deeper into the subsoil."

Brendon said he tackled the worst areas this year with plans to tackle another 200-300ha next year.

"I might even start contracting with the Reefinator," he said.

Timing is generally in February or March preferably after rain.

"I like using it in the wet because maintenance costs are a bit lower but we'll still go ahead in those months wet or dry," he said.

The Reefinator is designed with a working width of three metres (10ft), and can dig up common laterite rock and crush it.

WA's lateritic soils exists throughout most of the Wheatbelt rendering typical ironstone country almost non-croppable with literally thousands of rock "patches" or rock outcrops that farmers simply go around.

From the rear, the drawbar-mount Reefinator looks like a land roller, but it's when you take a look at the front of the machine that you gain a better understanding of how it works.

A total of 10 heavy duty ripping teeth are attached to wide individual flat shanks in box frames with the shanks designed with a cutting edge to promote the upwards movement of soil and rocks, cut into by the ripping teeth.

"It works like a cheese grater peeling off material," Tim Pannell said. "Depending on the rock profile it generally takes about three passes to complete the job.

Weight is a big part of the operation in conjunction with a working speed of about 10km/h, which means Tim can complete a hectare an hour, employing three passes.

"When the roller is filled with water, we're talking about an all-up weight for the machine of more than 21 tonnes," he said.

"The rock roller also was specially built with deeper ribs to enhance resistance pressures to be able to crack and pulverise the rocks."

Tim also has designed the ripping tines to work at different depths - down to 230mm (9in) for softer rocks and shorter for harder rocks.

He said there were more than 80 Reefinators operating on lateritic rock throughout Australia's grain belt since the first model debuted in 2014.