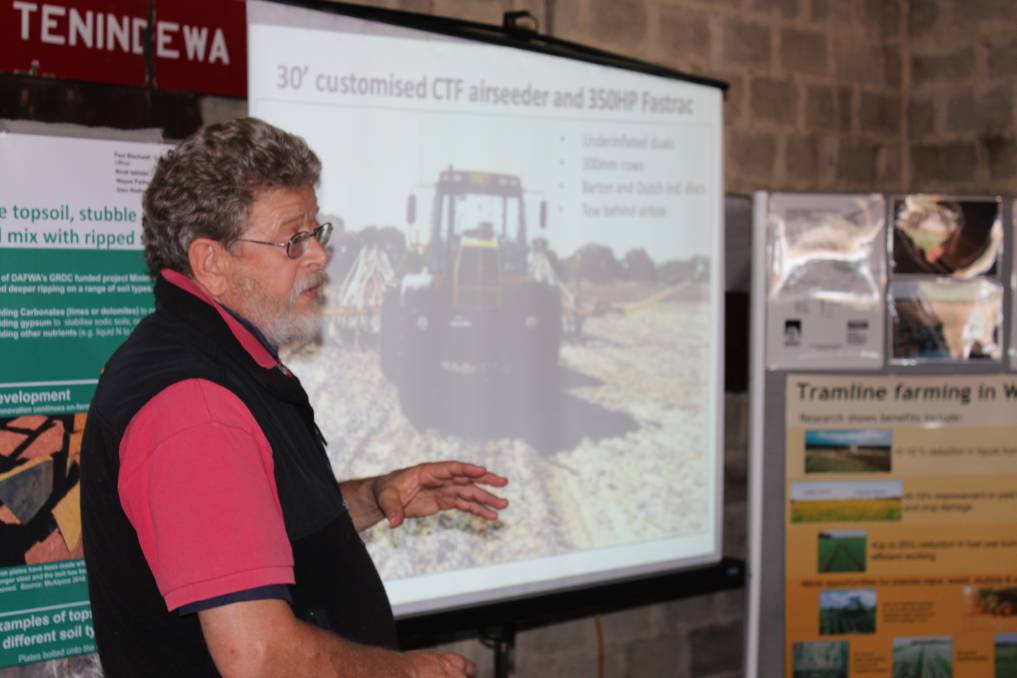 IT was part-passing of the baton and part sharing of more than 30 years of knowledge at a controlled traffic workshop held in Tenindewa last week.

IT was part-passing of the baton and part sharing of more than 30 years of knowledge at a controlled traffic workshop held in Tenindewa last week.

Retiring Department of Agriculture and Food (DAFWA) research officer Dr Paul Blackwell condensed his knowledge of controlled traffic farming (CTF) into a five-hour workshop for more than 35 growers and researchers.

Dr Blackwell, along with research officer Bindi Isbister and the team at DAFWA, have spent the past 26 years researching CTF in the northern wheatbelt and the yield benefits, fuel savings and soil fertility benefits the farming practice can offer.

DAFWA estimates that up to 70 per cent of WA's agricultural soils have moderate to high susceptibility to subsurface compaction.

"The tighter the compaction, the more effort the plant has to put in to grow through, which takes away the energy from the top of the plant, so the growth stage will be delayed," Dr Blackwell said.

"I have worked on compaction for many years in England but when I got to WA it felt too hard; the farms were too big, the views were too different and people went round and round in the paddocks and I thought "it's not going to happen"."

Starting on farm research in 1997, Dr Blackwell and his team have consistently seen an average yield improvement of 10pc in CTF over normal trafficking.

Results from 1997 comparing CTF to normal trafficking showed between a 10-13pc yield improvement and a $18-54/ha benefit.

Other benefits of switching to the system include improved soil structure, less nutrient leaching and generally 3-10pc less herbicide and fertiliser used from managing paddocks in zones and removing double sprayed corners.

"The best way to implement CTF is to develop a unique system that fits the landholder's own farm and circumstances," he said.

Another benefit from CTF in the Esperance area has been the significant increase in earthworm populations and decrease in the nitrogen fertiliser needed, according to Precision Agronomics Australia agronomy consultant Quenten Knight.

Mr Knight presented findings from a demonstration trial which showed the effects of soil compaction on earthworm counts.

In areas with no compaction, there were populations of 410,000 earthworms per hectare compared to 20,000/ha where soils experienced an annual compaction of wet soil at a 10-tonne axle load.

He said having a large earthworm population could also help increase nitrogen mineralisation in the soil.

"Earthworms can produce castings equivalent to their own weight daily and consume 4-10pc of the top 15cm of soil per year," he said.

"It is definitely an area that could use further research, but we are seeing a significant increase in earthworm activity where CTF is used."

In the northern and eastern Wheatbelt, termite activity is having a similar effect as Dr Blackwell presented findings from a 2008 study at Binnu by Theodore Evans from the University of Western Australia.

Dr Evans' research showed that ant and termite activity could have positive effects on soil structure, decomposition and nutrients in the soil, with up to a 36pc yield increase in dry years due to high water infiltration from insects tunnelling in soil and potential higher nitrogen and sulfur available to plants.

The gut microflora in termites can also be attributed to the mineralisation of nitrogen, phosphorus and sulfur.

There was also a 50pc reduction in the weed rolly-polly due to the control of weed seed by ants.