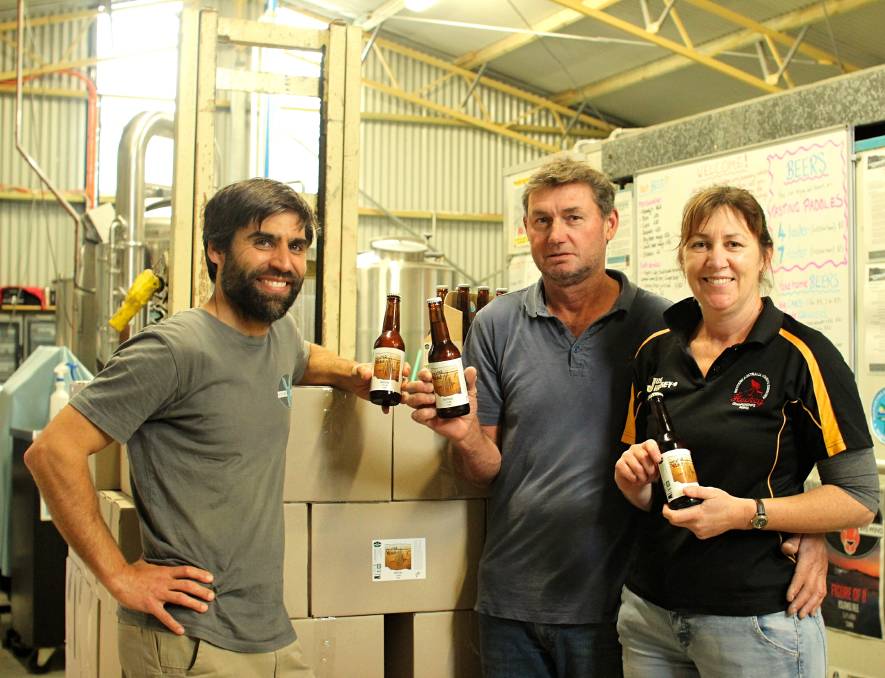 Several pallet loads of ‘Richter Ale’ have left Esperance, making the 600 kilometre trip to Meckering in preparation for the 50th anniversary of the Meckering earthquake.

Several pallet loads of ‘Richter Ale’ have left Esperance, making the 600 kilometre trip to Meckering in preparation for the 50th anniversary of the Meckering earthquake.

The town of Meckering was struck by a 6.5 magnitude earthquake around 11am on October 14, 1968, causing millions of dollars worth of damage and leaving more than 20 people injured.

The brew, produced by Lucky Bay Brewing to mark the anniversary, has been more than a year in the making and was made entirely from barley harvested in Meckering.

Event organiser Rebekah Burges first pitched the idea to a fellow farmer who put her in touch with Lucky Bay Brewing owner Nigel Metz back in July, 2017.

Ms Burges said the idea was met with support from the Meckering Sporting Club committee in August, 2017, who then agreed to fund the production of the beer.

The plans spurred a region-wide competition for the best barley during the 2017 harvest, won by the Snooke family, which was then sent to Esperance produce the beer.

Just a few months later, a competition was held to name the beer and, of more than 40 different entries, the name ‘Richter Ale’ was chosen.

A logo and design was produced and the delivery of the barley was scheduled – with the produce delivered and bottled within the month of August.

As part of the anniversary, the community of Meckering will host a weekend-long commemorative event, including a gala dinner on Saturday evening, October 13, and a full day of family-friendly activities and entertainment on Sunday, October 14.

Meckering resident and anniversary committee member Sharon Reynolds and partner Wayne made the trip to Esperance to help attach labels to the product and package boxes for transport.

Mrs Reynolds said the event had been a long time in the making and praised organiser Rebekah Burges for her hard work.

“We’ve received a lot of support, too, and we’ve sold around 190 tickets for the gala dinner,” she said.

“Around 100 families left after the earthquake and I think some of them will be returning for the anniversary.

“Our children couldn’t imagine what it used to be like – it really shaped the town.”

Mr Metz said the processes used meant the beer was entirely their own and said the business were happy to be involved.

For more information on the event, visit www.meckering50yrson.com.au/

The story Richter Ale set to hit the road first appeared on The Avon Valley Advocate.