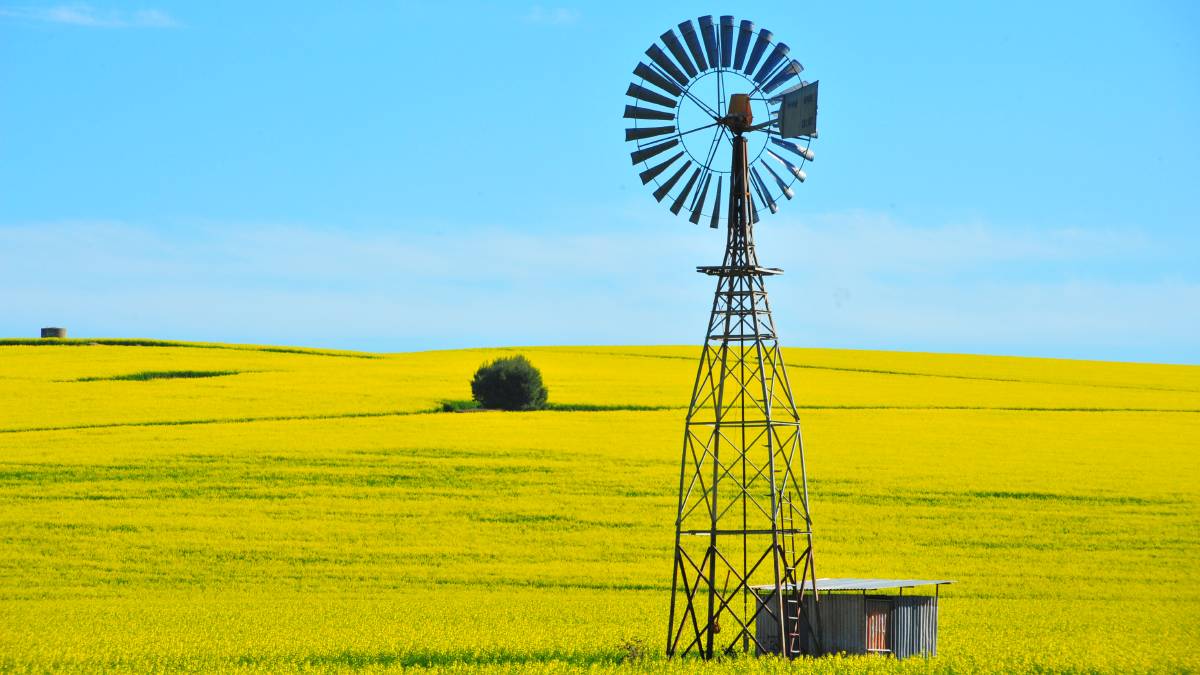 BFB’s majority-owner, US private equity firm Proterra, accepted a bid of $208 million by Canadian pension fund PSP for the mixed farming and logistics enterprise, even though the Agrinova consortium of local farmers stumped up $270m.

The sale will be considered by the Foreign Investment Review Board (FIRB).

As the investment in farmland becomes more valuable and competitive, investors are consolidating assets and rolling up parcels of land to squeeze maximum value from their deals.

The BFB sale has raised concerns that even if local bidders are able to raise the cash required for these deals, they’re not able to compete with the vast resources and track records of international players.

All foreign investors must pass a national interest test before they’re allowed to own any amount of our farmland.

But opinions differ on just what constitutes the national interest. 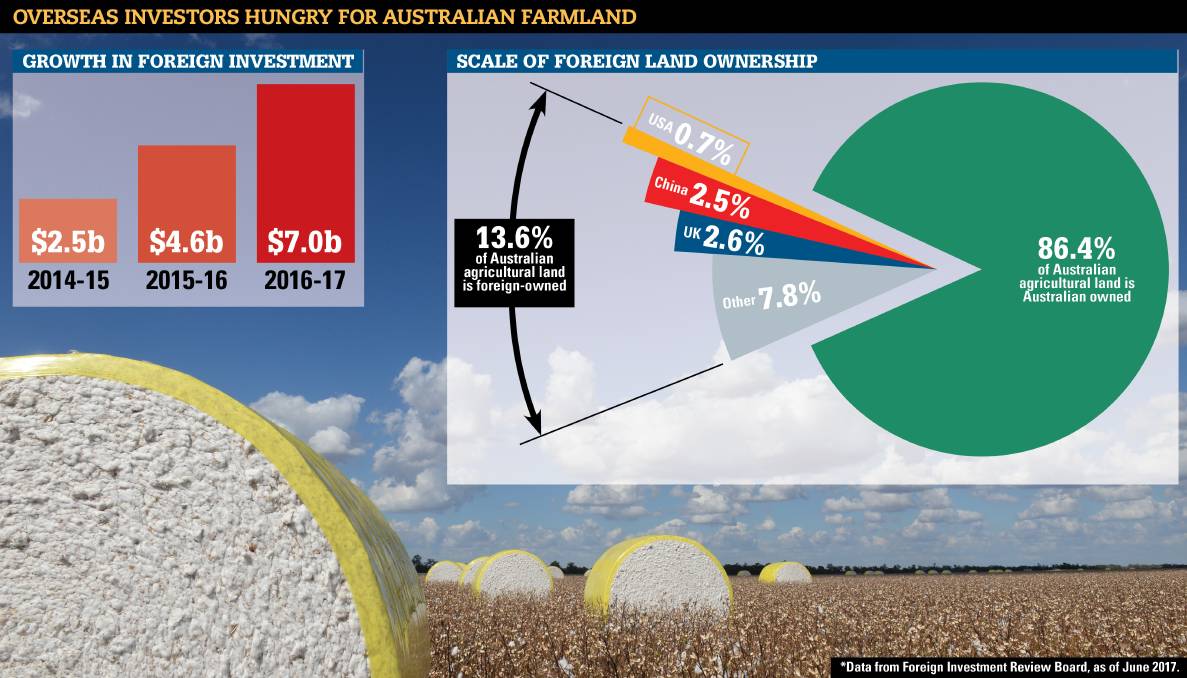 The FIRB is the gatekeeper for offshore investors in Australia. In May, chairman David Irvine outlined his national interest criteria.

He said the assessment process was “permissive”, meaning a foreign investment would be approved unless it was considered a threat to Australia’s economy, community, national security, competition, or taxation.

While many Australians remain sceptical of overseas landlords, it’s hard to find anyone who wants a total ban on offshore investments, given the productivity that new capital has brought to our farming sector.

Leaked details of the confidential sale process indicate BFB and its advisers at PricewaterhouseCoopers (PwC) cut short their plans to conduct an initial round of bidding – followed by a due diligence stage for successful bidders, and selected PSP over Agrinova before the second stage kicked off.

He said since he was “outed” in the role by the media “my phone and email have been running hot” with calls from people concerned Australian investors were locked out of premier agricultural assets.

“Australians are right to ask the question, and we need to find answers and hold those we elect and those responsible for the sale and purchase to account, because if nothing else, this new shift marks the beginning of a very slippery slope for all Australian farming families,” Mr Hogg said.

While the headline figures of the deal have been published, PwC has not confirmed if there were sweeteners offered by PSP – for example arrangements relating to proceeds from this year’s crop.

However, Mr Hogg considered his offer far superior than PSP’s, which ended up significantly more than the Canadian’s initial bid.

“Let’s be clear, the Agrinova bid was not just a little better, it was better on price by more than 20 per cent than PSP’s second crack at a BFB offer of $208m,” he said.

Agrinova would invest the value of the 20pc difference between Agrinova and PSP’s bid in the local community.

“Our consortium of Aussie farmers will issue 20pc of an Agrinova-owned-and-operated BFB to the local communities,” he said

“That’s 20pc of the each years dividends back into the community from which it came, instead of into the coffers of offshore investors.”

“It’s time Aussies rally around the notion of ‘Australian assets for Australians first’, if this concept is not in the national interest then as a country we have lost our way.”

Foreign investment has been crucial to the growth of agriculture.

“I’m not aware of any specific requirements that disadvantage local investors. In fact, the playing field is tilted in favour of locals,’ he said.

Australian agriculture is undercapitalised and needs foreign investment to drive productivity and realise the value of assets for Australia’s ageing crop of landowners.

“Only a small part of a foreign investment gets repatriated – say 4pc or so, as well as the land appreciation,” Mr Sackett said.

“In the meantime, foreign owners make enormous  investments in local labour, machinery, supplies – all the inputs are purchased domestically.

“We have an ageing farmer population and a huge need over the next 10 to 20 years for retiring farmers to sell.

“Some will sell to their next generation, but what happens when the children or neighbours don’t want to buy?

“If we say only domestic capital can buy the assets there will  be much less capital for them in the market.”

While NSW Senator John Williams acknowledges the benefits of foreign investment to agriculture, he said the time had come for strict new laws to direct offshore capital to undeveloped areas.

“If I was running the country wholly-and-solely I’d bring in regulations where foreign investors wanting farmland have to convince FIRB they will increase productivity, outputs and exports,” Senator Williams said.

“The problem I see is that most of our farms in developed agricultural regions are at peak production. They’re fully developed, maxed-out on irrigation licences and so on, run by people who know the land and have done the lot to it.

“When a foreign investor buys land like that there’s no productivity increase, or jobs, or tax take, and the profits flow offshore.”

“If they want to go to the Top End and build dams, develop the country and irrigation my attitude is go your hardest.”

At the time of its listing, BFB was understood to be eyeing expansion plans, which it hoped its new owner would help fund.

BFB comprises a 48,700 hectare cropping and storage enterprise with a 332,000 tonne grain storage site owned in partnership with Cargill, a pig production operation and fuel and fertiliser distribution.

The sale of Temora, NSW agribusiness BFB to Canadian pension fund PSP is subject to approval by the Foreign Interest review Board (FIRB).

Treasurer Josh Frydneburg, who has oversight of FIRB, declined to comment on the BFB sales, but said his government had reformed the criteria for FIRB’s assessment of sales of farmland to level the playing field for local investors.

“(The reform) ensures that Australian bidders have equal opportunity to participate in a given sale process, and we believe it is having a positive impact,” Mr Frydneburg said.

“It is a long standing practice that the FIRB and the Treasurer do not comment on the details of foreign investment screening and subsequent processes as they apply or could apply to particular cases.”

In February then Treasurer Scott Morrison announced new FIRB criteria, which followed the $365 million sale of the iconic S. Kidman and Company estate.

“Concerns around the ability of Australians to participate in the sale process of agricultural land acquisitions have been a factor in my previous foreign investment decisions, including approval of the sale of S. Kidman and Co,” Mr Morrison said in February.

Foreign investors must demonstrate that land they intend to buy has been widely marketed, part of a minimum 30 day public sales process, Australian bidders had an opportunity to participate and development must to commence within a five year period to prevent land banking.

The story Have offshore players got the jump on local investors? first appeared on Farm Online.