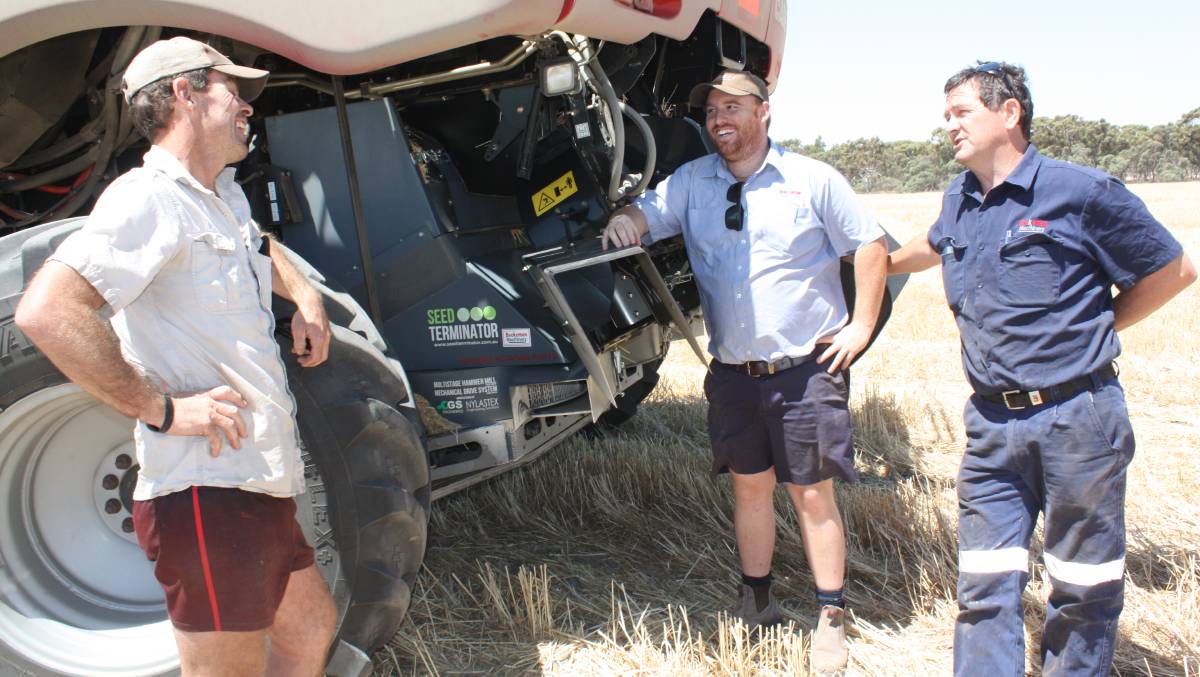 Yerecoin farmer Cameron Waters is growing in confidence that he could see a fairly dramatic fall of ryegrass and radish plants in four or five years with his latest “tool”.

And that’s a big encouragement when you’re using almost every tool in the toolbox to reduce weed seed burdens.

It’s a slow process but Yerecoin farmer Cameron Waters is growing in confidence that he could see a fairly dramatic fall of ryegrass and radish plants in four or five years with his latest “tool” – a Seed Terminator.

He bought it from Boekeman Machinery, Wongan Hills last year and was encouraged by its performance, notching up 256 mill hours with it integrated into a Case IH 7240 combine harvester.

The Seed Terminator is currently working a 2000 hectare cropping program and last week total mill hours had clocked onto 660 hours.

“It turns anything that goes into it into powder, like flour and that includes ryegrass and radish seeds.

“It hasn’t needed any servicing and the only addition has been a new outer screen around the rotor to improve wear.”

The Seed Terminator has been designed as a simple one-pass solution to harvest weed seed control.

It incorporates an efficient mechanical drive system that is driven by the harvester engine, with minimal moving parts, incorporating only shafts, belts and gearboxes.

The belt is driven off the chopper shaft.

One of the first questions Mr Waters is always asking focuses on engine power draw-down.

And his stock answer now is, “I don’t notice it – it doesn’t take any power away from the header.”

Mr Waters ensured he had adequate horsepower when he bought the 7240 before buying the Seed Terminator (the header is rated at 300kilowatt (405 horsepower) with a boost to 349kW, 468hp.

“It depends on conditions but the biggest enemy to power increases is straw,” Mr Asphar said.

“You can get caught out with canola so you’ve got to open the concaves and with cereals it’s about maintaining straw and chaff separation.

“This year there has been plenty of straw and headers are still cutting low so getting sieve loadings equates to mill loadings.”

According to Mr Waters it’s the old adage of driving the header to the crop and backing off to prevent overloads.”

Mr Asphar also said that generally a header fitted with a chopper was ideal because “it throws straw better”.

“Cameron has a beater and that can work okay in some conditions but my preference would be a chopper.”

For Mr Waters, the Seed Terminator is just another tool to be used in a long term plan to take pressure off using chemicals.

“Hopefully this will give us more confidence in getting cleaner paddocks,” he said.

Mr Waters also said the support of Boekeman Machinery tipped the scale for his purchase.

“I would not have had the confidence to run the machine without the support of Boekeman Machinery and particularly Brett Asphar and the service team,” he said.

“They all made sure that the machine ran well and we had back-up service and parts available.”

The unit is now available for Class 7, 8, 9 and 10 headers from John Deere, Case IH, New Holland and recently expanded to include Massey Ferguson and CLAAS Lexion.

“From our proof of concept year in 2016 when we released nine units, which we have since upgraded, we now have 81 Seed Terminators successfully operating, including one being trialled in Canada.

“It may seem like small numbers, but we have purposefully contained growth to ensure we can maintain personal service contact with owners to improve the Terminators performance on their farms.

“Harvest Weed Seed Control (HWSC), like farming, is a journey not a destination and we are on the journey together.

“This has led us to quickly respond to improvements made after the 2017 harvest in regards to lower header power requirements and harder-wearing materials, without compromising weed seed kill.

“While it’s a bit early for a complete review, the feedback on performance is very positive and we now have 80 users providing invaluable data to enable continued fine tuning and improvement.”

“It provides a simple one-pass solution to harvest weed seed control,” he said.

It incorporates an efficient mechanical drive system that is driven by the harvester engine, with minimal moving parts, incorporating only shafts, belts and gearboxes.