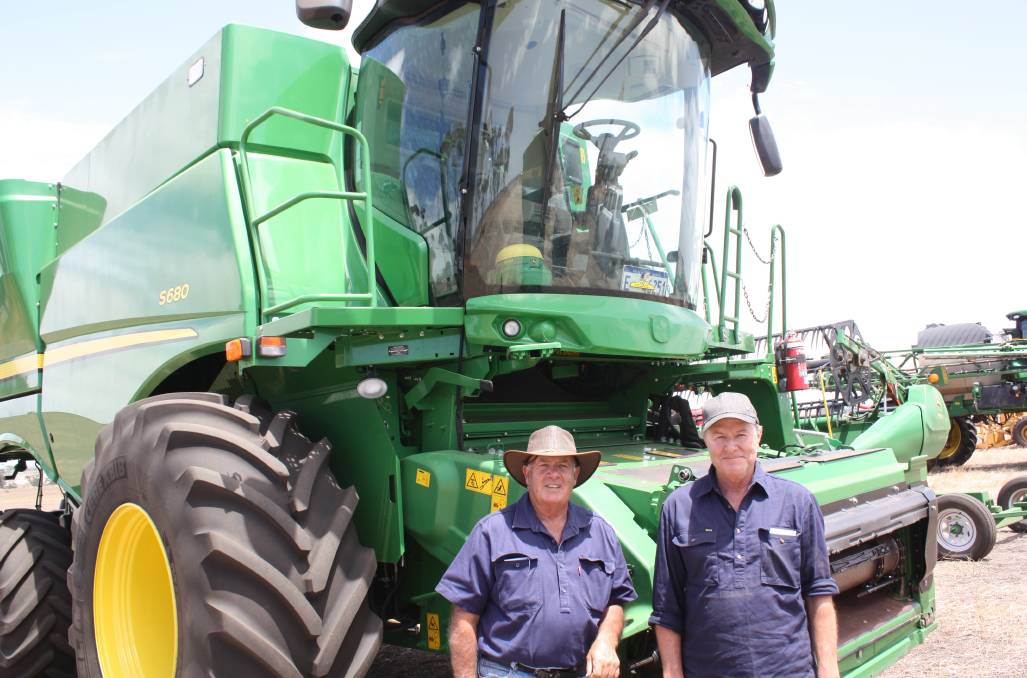 Retired Grass Patch farmer Tony Ietto (left) and Haydn Thomas, Scaddan, in front of a John Deere S680 combine harvester which achieved the sale top price of $415,000. With 600 engine hours and 470 rotor hours, it was considered a good buy. It came with a 12.2 metre 640D front and RTK guidance.

A clearing sale at Munglinup grossed more than $2 million.

Held by Landmark Brindley & Gale, Esperance on behalf of Neil and Mary Wandel, Willawayup Farms, the sale grossed more than $2 million, as auctioneer Neil Brindley deftly handled the 247 registered bidders through an orderly process of cattle and sheep disbursements (See pages 106 and 108 respectively) before attacking the machinery lines.

A crowd of about 350 farmers watched intently – and in silence – as they witnessed the S680 header go under the hammer.

It was considered a good buy as it had only recorded 600 engine hours and 470 rotor hours.

It came with a 12.2 metre 640D front and RTK guidance and was in good condition.

At one stage bidding stalled at $400,000 with Mr Brindley declaring a phone bid had not reached its reserve price. West Cranbrook farmer Fred Smith (right), pictured with his son MacKenzie, admitted he made the four hour trip, "looking for a bargain". He didn't find one on this lot which featured a 2015 John Deere R4045 self-propelled boomsprayer equipped with RTK guidance, a 4500 litre tank and a 30 metre boom. With only 2230 engine hours it failed to meet the reserve price and was passed-in on a final bid of $175,000.

Not surprisingly, a John Deere 770CH dual axle road grader (13,980hrs) with new tyres and front blade, found favour with a pocket of bidders pushing the final bid to $84,000.

There was no shortage of bids either for grain handling equipment.

Harvest equipment included a Mainero 2230 PTO-drive bag loader, selling for $6500, while a selection of open top gravity discharge mobile field bins ranged from $50 for a 25 tonner (twice), up to $14,000, for a PTO-driven 85t Parker open top model. Mt Ridley farmer Brendon Tyrrell and his son Ethan were out for a look at the sale offering, making a close inspection of this 18.2m DBS precision seeder with a 12,000L Ausplow Multistream air seeder. The rig attracted a lot of early inquiries but on the day, bidding failed to reach the reserve and the rig was passed-in after a final bid of $160,000.

That price, however, was enough to secure a licensed 2009 Nissan tray top ute with a 3L diesel engine.

Trailers are always handy and a licensed tandem axle model (2.9 x 1.8m) with metal sides and storage box went for $7250, with bidding pushed no doubt by the losing bidder on the previous lot, a licensed 2.7x1.5m similar trailer which snuck away for $1700.

The bargains in the sundries lines saw eight buckets of 120 millimetre Cyclone coupling clips knocked down for $80; 70 scarifier points made $350; a 20t-capacity jack made $100 and a pallet of five-studded Toyota Landcruiser tyres (four) and rims (eight) cost $325.

A collector’s item saw a Levermatic wool press paired with a Sunbeam dual box electric wool press leave the premises with the new owner parting with $20.

Big ticket items that failed to make the reserve prices included a 2015 John Deere R4045 self-propelled boomsprayer (2230hrs) which was equipped with RTK guidance, a 4500L tank and a 36m boom.

An 18.2m DBS precision seeder with an Ausplow Multistream air seeder also failed to make the set reserve after a flurry of inquiries before the sale. The clearing sale on the Torradup property at Munglinup brought back memories for Dalyup farmer John Luberda (right) pictured here with his son Peter. "I use to do contract seeding and hay-making here in 1962," he said. They looked over this Norrish 24 tonne dual axle ChaseMor chaser bin with extension auger. From an opening bid of $15,000, it was finally knocked down for $35,000.

Mr Brindley said the sale format attracted a good crowd from throughout the State.

“It was a very positive result,” he said.

On the sheep, bidding was very strong and they were pleasing values reflecting the wool market.

Mr Wandel, said he was happy with the sale.

“We met the market and the good stuff sold very well, including some tractors,” he said.

“I thought the chaser bins were good value and the oaten hay attracted a good price.

“And the header achieved what I thought was good value.” It was a good day out after a five hour trip for Burracoppin farmers Graham Johnston (left) and Chris Barnett (third left), who is pictured with his two sons Jacob and Josh. "We're just having a look and you never know what you might find," quipped Chris. The foursome were pictured in front of a 30 tonne single axle Trufab Grain King chaser bin, with a fire unit. It was later sold for $40,000.

Ian Sassella was an early bird at the sale checking the lines to spot a bargain. "Maybe I'll get one of those field bins behind me," he said, as he checked out this land roller which later sold for $5500. The two 25t capacity, open top, gravity discharge field bins pictured, which were in good condition, sold for $50 each. Dalyup farmer Michael Hart was one of 12 outside vendors at the Wandel clearing sale last week, offering this four-barrel DE Engineers grain cleaner. It came with wheat, barley and canola screens and from an opening bid of $20,000 was finally knocked down for $45,000. "It was surplus to requirements so I'm happy it's gone to a new owner," Michael said. 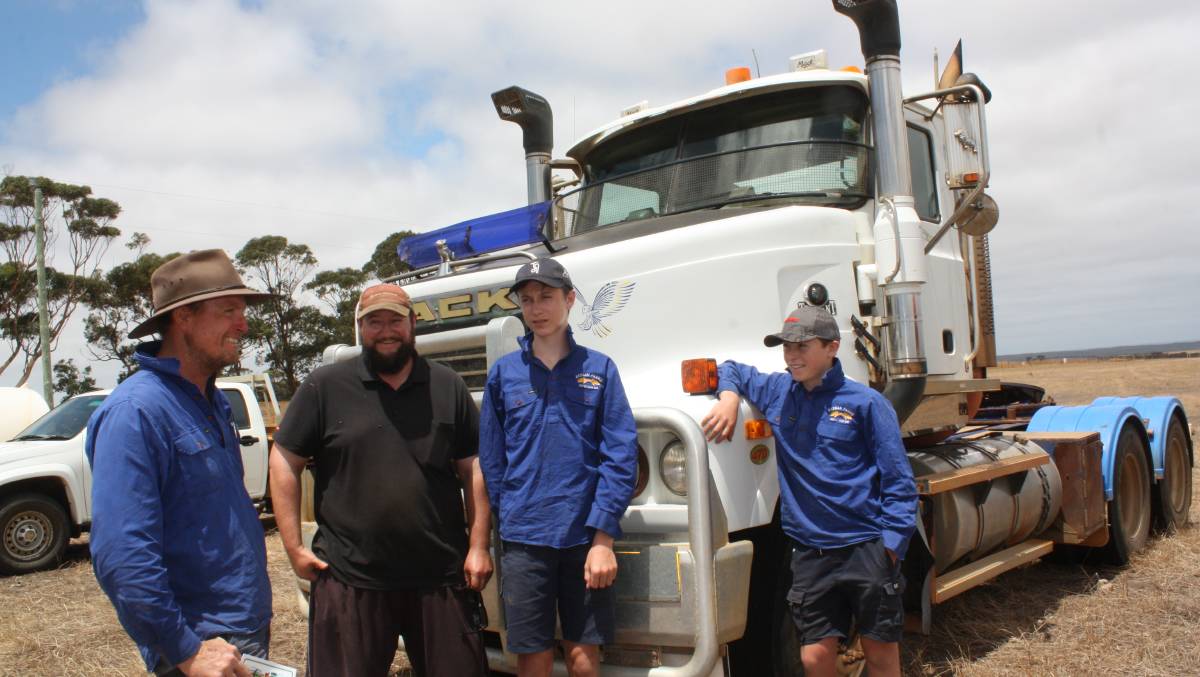 Hopetoun farmers Stott Redman (left) and Ashley Witt discuss the features of this 2005 Mack Trident prime mover with Stott's sons Darcy and Beau. The licensed unit, put up by an outside vendor, had chalked up 982,000 kilometres and came with side tipper hydraulics. It was later passed-in after an opening bid of $10,000. It didn’t take long for keen bidding to start with lot seven in the sundries line drawing spirited bidding for this pallet of racking. Auctioneer Neil Brindley (centre), parried among bidders and finally knocked it down for $700.