With a big rain event forecast and a shortage of heavy sheep to fill Chinese orders, mutton sales kicked into another gear this week. 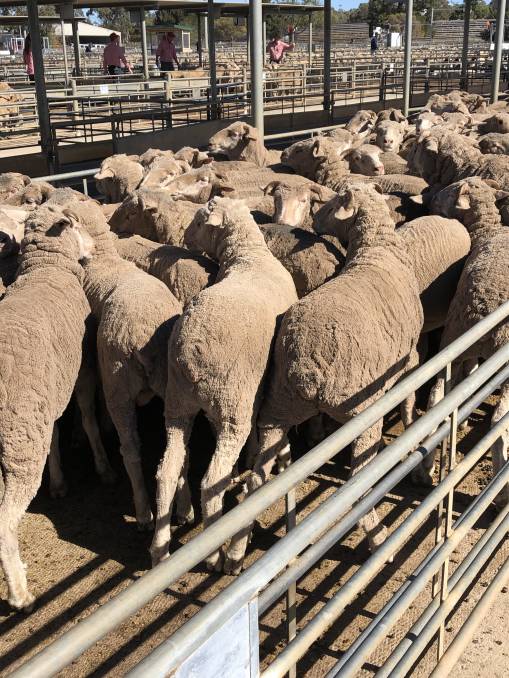 The forecast of a major wet weather event across much of the eastern states and shortage of heavy sheep to fill Chinese orders kicked mutton sales into another gear this week.

Typically peaking during the winter months, prices have lifted earlier than usual this year.

The national saleyard mutton indicator reached an all-time high of 540 per kilogram carcase weight (cwt) on Tuesday, which is two per cent higher than the previous record set in May 2017.

At two major selling centres in NSW and Victoria, prices per kilogram were what agents described as "the highest they have seen per kilo for mutton".

The wethers, of Glendonald-blood, sold by Landmark St Arnaud, were offered by Chris and Jacqui Arbuckle of 'Hillside', St Arnaud.

Damian Drum of Landmark St Arnaud said the 20 to 30 millimetres of rain they had already received along with the major rain event forecast for NSW has pushed prices along nicely.

"What makes these prices so good was the fact these wethers were bare shorn, just two to three weeks off the shears," Mr Drum said.

"About seven kilos of wool came off them at just nine months. This makes them a $310 to $320 outfit.

"The sheepmeat job at the moment is enormous."

The wethers were estimated at an average carcase weight (cwt) of 37 kilograms.

The four year-old wethers, with just two to three months wool on them, were offered by Marilba Pastoral Company, Yass.

And an Australian record was set for ewes at Wagga Wagga, with a major export company paying $237.20 per head for 150 crossbreds.

MLA reported numerous sales above $200 per head for Merino and crossbred ewes.

Heavy crossbred ewes topped at $232 per head to average 552c/kg cwt and heavy Merino ewes sold above 600c regularly throughout the sale, however averaged 570c/kg cwt.

Director of RLA, James Tierney, said prices per kilo in Wagga on Thursday were, on average, the dearest he has ever seen for mutton.

"With most mutton making over $6 per kilo, that is definitely the highest price paid for mutton I have ever witnessed," Mr Tierney said.

"I don't know how much dearer mutton can get, but I think lambs can still get much higher than they are now.

"I don't think prices will fall any time soon either. It's all about the lack of numbers."