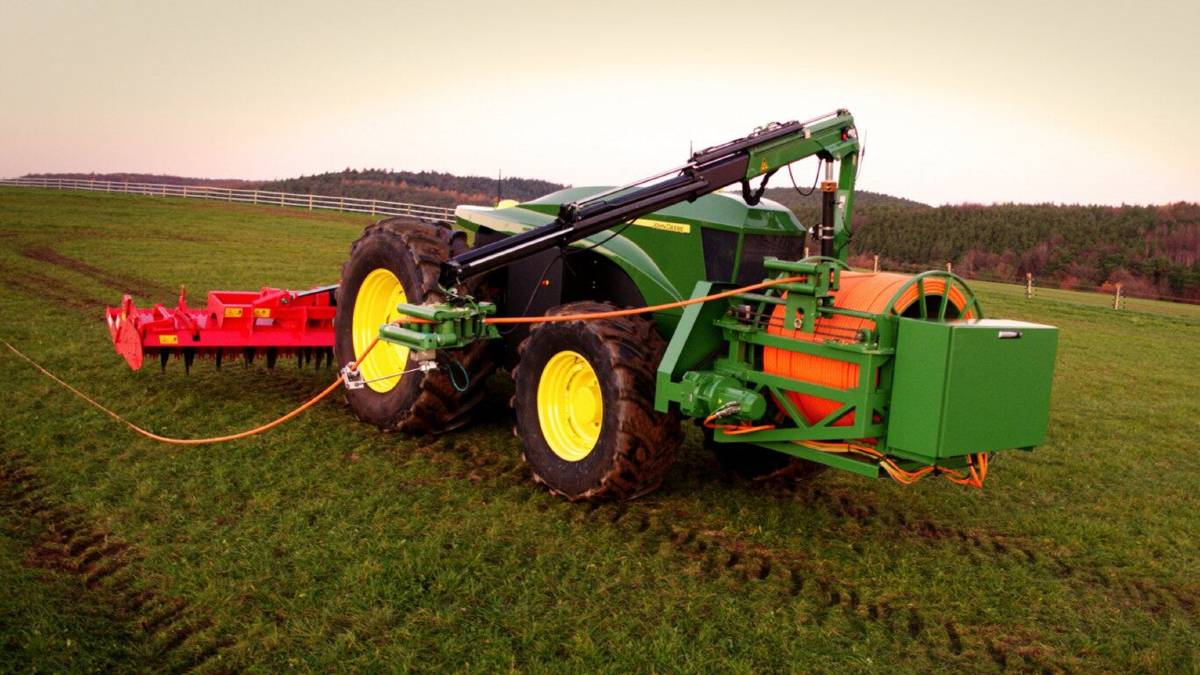 John Deere's new prototype electric tractor has been upgraded to cable connection for power, replacing batteries in the initial model which was built in 2016. Trials are still going on this year as Torque's Deep Throat in Deere says "it's still strictly prototype".

Three years ago John Deere put its proverbial hand up as a serious player in the autonomous vehicle (AV) market with a fully battery-powered electric tractor.

THREE years ago John Deere put its proverbial hand up as a serious player in the autonomous vehicle (AV) market with a fully battery-powered electric tractor.

It was known as the SESAM (Sustainable Energy Supply for Agricultural Machinery) tractor and heralded the company's first serious attempt to research alternative power for farm machinery.

This year the company has improved on its first effort by developing an electric cable-powered tractor developing up to 298 kilowatts (400 horsepower).

The so-called GridCON research project and tractor are part of the company's continued efforts in the electrification of agricultural machinery.

The GridCON tractor has been given a major makeover to its predecessor, featuring no cab and no batteries underneath the bonnet.

It is the first vehicle to be fully electric, permanently cable-powered and capable of fully autonomous operation in the field.

Based on a John Deere 6210R tractor, GridCON uses a cable connection from the paddock border to the machine, which transfers power continuously at more than 300kW (402hp).

A drum fixed to the tractor carries up to 1000 metres of cable, although the length can be extended if required.

The cable is fed out and reeled in while guided by a robot arm to keep the operation friction-free and at low load.

An intelligent guidance system is also used to prevent the tractor running into or over the cable.

At work, the tractor follows pre-set rows fully autonomously at operating speeds of up to 20 kilometres an hour.

The vehicle can also be guided manually using a remote control.

A power supply of 2.5 kilo volt AC is required and the GridCON tractor uses a 700 volt DC bus (a conductor that distributes voltage) for electric power distribution both onboard and for implements.

The machine employs a cooling infrastructure for off-board electrical use, while total efficiency of the drive train is in the region of 85 per cent.

Total empty weight of the working prototype GridCON tractor, including cable drum and robot arm, is about 8.5 tonnes, so it is about the same weight as a conventional John Deere 6195R tractor but with twice as much power.

Research engineers are aiming to reduce the weight further by at least one tonne.

Besides this favourable power to weight ratio, the concept offers the twin benefits of noiseless and emission-free operation.

The GridCON project is a joint project of John Deere, the University of Kaiserslautern, Germany and BAUM Consult GmbH, Hamburg. Germany.

The cable-power is an interesting concept but it's hard to imagine it will have great appeal in light of the technological leaps being made by battery producers.

For example, there already is one Canadian company, GBatteries, Ottawa, that claims a "lunch hour recharge".

The company's chief commercial officer Tim Sherstyuk said research on quick charging was focusing on minutes, similar to filling up a vehicle with diesel fuel.

"Our technology is a mixture of hardware and software that falls between batteries and chargers.

"It allows us to monitor what is taking place inside Lithium Ion (Li-ion) batteries as they charge and adjust the charge to allow faster charges without damaging the battery."

Tim says it's possible to recharge cell phone or vehicle Li-ion batteries in as little as five minutes, but doing so with current charging methods increases heat and reduces cycle life of the battery from 600 to 800 cycles down to "50 or fewer".

"The problem with batteries today is not charging speed; it's possible to charge any battery quickly, but the faster you charge a battery the faster it will degrade," Tim said.

"Our technology is able to decrease the irreversible chemical reactions that happen during charging, so that the same batteries can be charged fast without compromising cycle life."

That's one small cable for Deere and one giant leap for batteries.