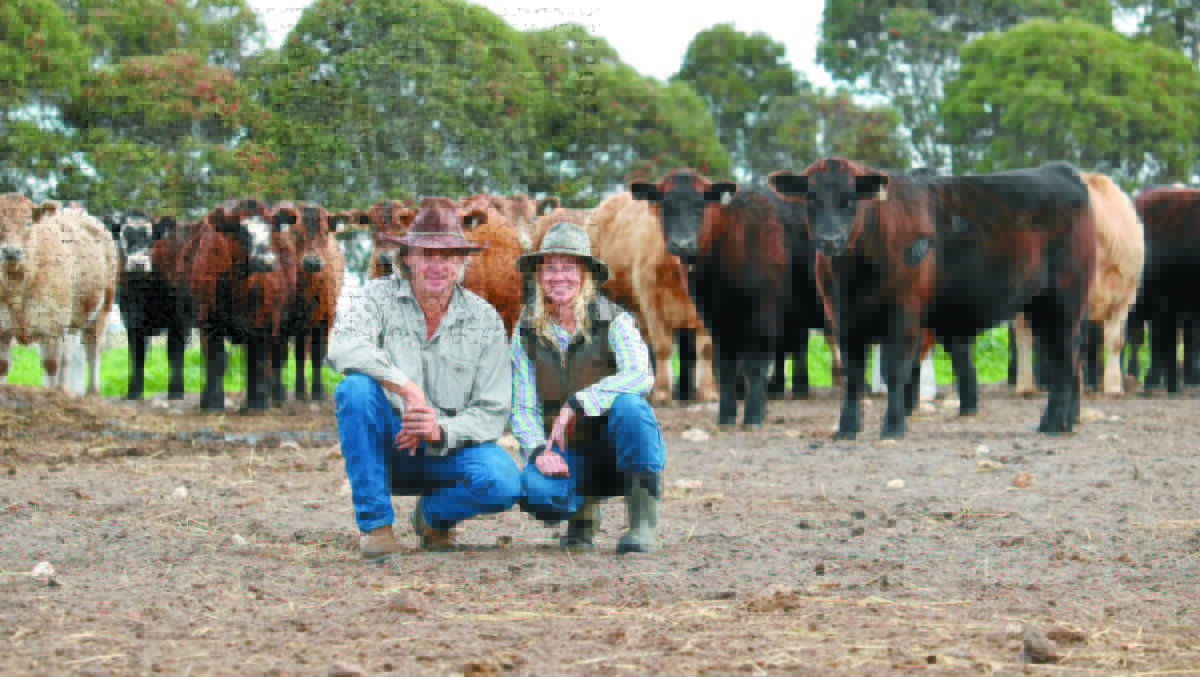 Both have parents still involved in the industry and Peter is the third generation of his family to run beef cattle.

It also means he and Tanya are the third generation of the family to be dealing with Harvey Beef, and its predecessor EG Green & Sons.

Peter and Tanya moved to Bremer Bay from Margaret River nearly 20 years ago, with the goal of establishing a large scale cow-calf operation.

"There wasn't a lot of scope to expand in Margaret River with land tightly held and expensive and so with the help of our parents we looked further east for opportunities to buy a larger holding," Peter said.

That was in the late 1990s and while initially the couple were keen to move to Manypeaks or Green Range, it also coincided with the period where land along the south coast was in high demand from tree companies.

"Anything that came on the market wouldn't last long and we couldn't compete on price," Peter said.

"The tree companies weren't buying out as far as Bremer Bay at that stage, so we came and had a look out here and were able to buy a 950 hectare property."

"In the early days we ran a cow-calf operation and also reared Friesian calves and bought in pastoral cattle to fatten and sell as a sideline," Peter said.

Through hard work and a bit of luck the Buckenaras were able to expand over the years and now farm 3000ha.

"We were lucky that land near to us came up for sale," Peter said.

Ironically, their most recent land purchase was a tree block, situated closer to the coast, part of which they were leasing.

Over the years the Buckenaras have also steadily increased their cattle numbers and now run a 500 head pure Santa Gertrudis cow herd.

It is through the feedlot that they have been able to build a strong relationship with Harvey Beef.

"When we started the feedlot we didn't have a contract and we fed whatever came up - whether it was pastoral cows, vealers or Friesian steers," Peter said.

"The feedlot really provided us with the opportunity to diversify the enterprise and to value add our grain and our cattle.

"We were supplying Frieisan steers to Harvey in those earlier years and then we became contracted to them when they took on a supermarket supply contract."

The Buckenaras say the consistency of message they get from Harvey Beef gave them the confidence to increase the number of cattle they feed each year.

"We deal with (cattle buyer) Campbell Nettleton and he has been great for us and offered plenty of support," Peter said.

"I think we have developed a pretty good partnership with Harvey Beef now and we know what to expect and hopefully we are supplying what they want.

"There is a good level of feedback and we know the direction they want to go and we supply to suit that direction.

"When we started feeding we were only putting 100 head through a year and now we are doing 1000 head, and the strength of that relationship has certainly given us the confidence to expand."

The Buckenaras feed their own calves as well as buying steers from the Mt Barker Regional Saleyards.

"Most of our cattle are fed on an 80-day program," Peter said.

"I like buying from the yards because we can be specific about the calves we buy in terms of weight.

"I try and get there to buy if I can, but when I can't we use our agent Harry Carroll who we have been dealing with for a long time and he knows what cattle we like."

The Buckenaras feed for 10 months of the year and deliver calves over a nine month period with 50 head going every fortnight on average.

"The reason we do a regular booking is to get the maximum number in the grid," Peter said.

"If we can we take the tops off every fortnight, it means we don't have to dig too deep to get numbers."

In setting up their feedlot, the Buckenaras wanted to keep the process as simple as possible.

"We have eight pens and feed from five-tonne self feeders which are filled on Monday and Thursday," Peter said.

"The ration is a mix of triticale or wheat with oats and lupins.

"The self feeders help us save on labour. Finding labour can be a bit of an issue and it means that we only need one person doing the mixing."

All grain used in the ration is grown on the property, except the lupins which are bought in.

The addition of the coastal block means that the Buckenaras will aim to be self sufficient next year with all grain used in the feedlot grown on farm.

Peter and Tanya say the other benefit of having a supply relationship with Harvey Beef was that it gave them a solid price platform.

"A consistent pricing message gives everyone the heads up as to where they are going and it certainly makes for a better planning process," Peter said.