Vendors breathed a collective sigh of relief when last week's Chapman Valley Breeders' Ram Sale posted a strong result in a year when the season has been disappointingly dry.

VENDORS breathed a collective sigh of relief when last week's Chapman Valley Breeders' Ram Sale posted a strong result in a year when the season has been disappointingly dry.

It was a complete contrast to 2018 when the perfect scenario of exceptional sheep and wool prices aligned with a generous season and the sale exceeded expectations.

This year the crowd was still vibrant and buyer registrations tallied more than 40, but the drive to the Nanson showgrounds more than hinted at the difficulty farmers would face if there were not decent finishing rains for crops soon.

If there was one thing that lifted the sale then it was the sheer quality and presentation of the 203-head line-up of rams on offer.

Buyers travelled from some far-flung regions in acknowledgement of genetics that were equal to any in WA.

Douwana Dorper stud again took the $3000 top price honours with a ram sold to Ida Vale stud at Kojonup and one commercial buyer travelled from the South West to get one of the two $1800 equal top Poll Dorset rams from Tipperary stud.

While buyers retained their enthusiasm by clearing all but three rams in the shed, they were not forced to compete with the same vigour as last year, allowing the overall average to ease by $265 for the 200 rams sold.

This year the offering averaged $1171 compared with $1436 for last year and managed to hold onto some of the gains made two years ago when the sale averaged $1105 in 2017.

Trevor Smythe, Landmark Geraldton, said the presentation was outstanding and vendors were rewarded for their decision to keep numbers up in a tight season.

"They were spot on for numbers and considering the season the buying support was very good," Mr Smythe said.

The buzz in the crowd reduced to a respectful silence in anticipation of some good prices for the 50 Dorper rams from Kim and Jason Batten's Douwana stud at Yuna.

An eye-catching photo of the ram 72/18 had been spotted on Douwana's website, and coupled with a good set of figures and clean shedding, Ms Gardner was encouraged to go the further step without seeing the ram in the flesh.

Douwana went on to post the six highest prices of the sale including the $2800 second highest price paid by Jeremy Wasley, Mingenew, who bought 12 rams including another at $1800.

LI Reynolds & Co paid $2500 for a single ram and Aiden and Naomi Obst, Kilkerran Agriculture Pty Ltd paid up to $2400 and $1900 to get the best of four to use in a pure Dorper flock at Mingenew.

Ms Obst competed strongly on the better shedding types, saying they appreciated the Dorper for its ability to simplify and fit easily into their mixed farming operation and equally appreciated the problem-free nature of the Douwana rams. Wynarling studmaster Les Sutherland, Perenjori, holds the top price Poll Merino ram at the Chapman Valley ram sale. With him is Trevor Smythe (left), Landmark Geraldton and buyer Paul Blayney, Eradu, who paid the $2300 top as well as $2000 for the team leader.

The sale opened with Landmark auctioneer Tiny Holly calling for onlookers to applaud vendors on their presentation of sheep to demonstrate their appreciation of the quality.

It was a genuine gesture and by lot two the $2300 top Poll Merino price had been set by Les Sutherland's Wynarling stud, Perenjori.

Buyer Paul Blayney, Eradu, came with a plan to buy early saying they were the best sheep and best value for money.

"For the past few years the first rams have been the cheapest and prices have just gotten dearer as the sale went on," Mr Blayney said

The top price ram was an impressively tall sheep that stood over a lot of ground and carried an attractive SRS-style wool measuring 17.9 microns with 99.9 percent comfort factor at its August test.

It also had a current 109 kilogram body weight, 4.6 millimetres of fat and a 33.5mm eye muscle depth.

There was no buyer hesitation for Wynarling's 30-ram offering and by the end of selling the stud had posted a $1447 average which compared with $2155 for 22 rams offered and sold in 2018.

Wynarling is a relatively new addition for Mr Sutherland, who is also involved with Arra-dale stud at Perenjori.

He has found the different style of sheep has been complementary and because of such good support from long-term buyers both at auction and privately, he had no plans to change the soft free-growing wool style that performed well in higher rainfall areas.

Wynarling rams surged to $2000 for a second time driven by AV & ME Barndon, Moonyoonooka. 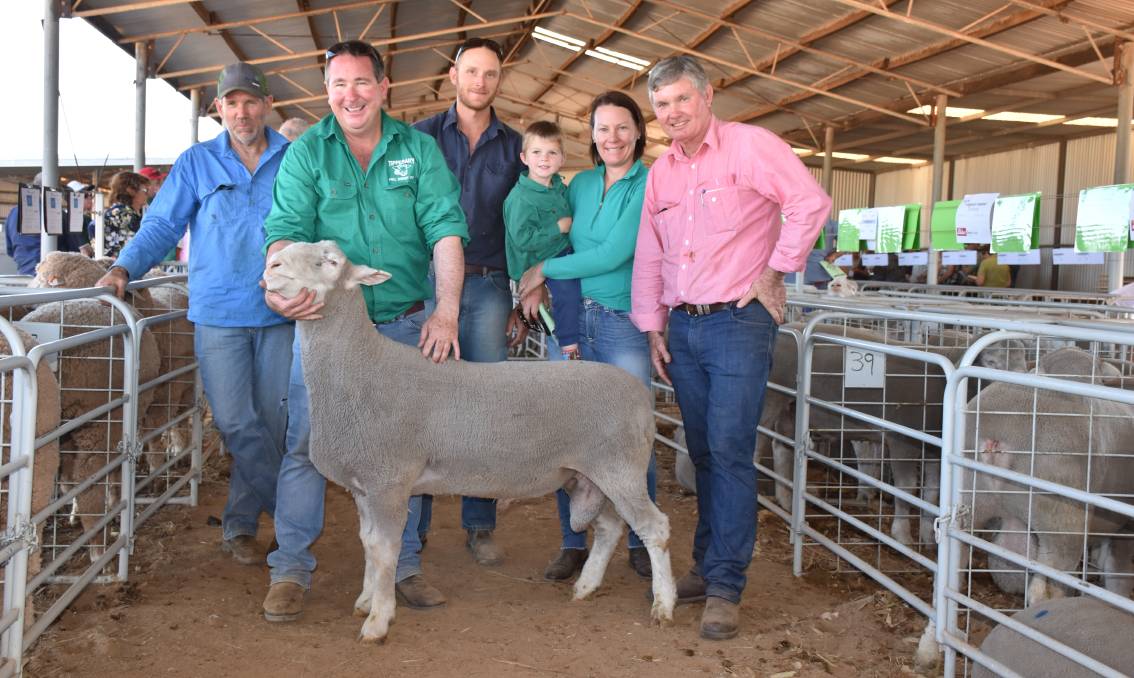 The Levett family, trading as Tipperary Farming Enterprises, Walkaway, was the sole Poll Dorset vendor but with the purchase of the Woodgrove stud from Ted and Gail Hosking earlier this year buyers still had the option of buying from both genetic sources.

The highlight of the offering was the depth of quality and the many generations of Tipperary breeding on both sides of sale rams' pedigrees proving Tipperary genetics were succeeding at the highest level both subjectively and objectively.

The first to invest was Mt Ferguson Grazing farm manager Brad Skraha, who has regularly travelled from Boyup Brook to buy six rams.

He said the Tipperary sheep had great length and depth and when appraising figures, he was prepared to accept rams with higher fat measurements because they were being joined to Merino ewes.

Nigel and Tanya Moffat, Moonyoonooka, also paid $1800 to get the best of four Tipperary rams before buying another two from Woodgrove.

It was several years since Mr Moffat had attended the sale, but he hoped to increase his prime lamb turnoff to more than a 1000 and with the absence of several buyers his presence was particularly valued.

Equally pleased was Elders auctioneer Gary Preston who said considering there were a few buyers missing because of the adverse seasonal conditions, sale values had held up well and he was pleased to see people who had travelled some long distances to attend.

He said the sale's high clearance rate had been a great achievement given the number of ewes that had gone from the district in the past month.

Frank Clune, Newmarracarra Co, Bringo, was one of two main volume buyers, taking home 19 Woodgrove rams, while a buying order held by Neil Johnstone, Elders Geraldton, netted 20 rams for up to $1400 (2) on behalf of an undisclosed buyer.

Neither Tipperary nor Woodgrove had any problem in achieving a 100 percent clearance.

All 48 Woodgrove rams sold under the hammer to average $877 compared with $980 last year.

Studmaster Randal Levett came away from the auction "extremely pleased" and had expected a bigger struggle after several clients had indicated they wouldn't be needing rams this year.

Instead he had been pleased with the support especially from Woodgrove clients who were transitioning to the new ownership.

At this stage he had no plans to change the style of the Woodgrove sheep but was working on a three-year plan to implement performance recording to give clients more information.