Tuesday, October 15, was a day that probably didn't have much significance to many people, but for about half of those working and living in rural and regional Western Australia and Australia, it was a special and important day. 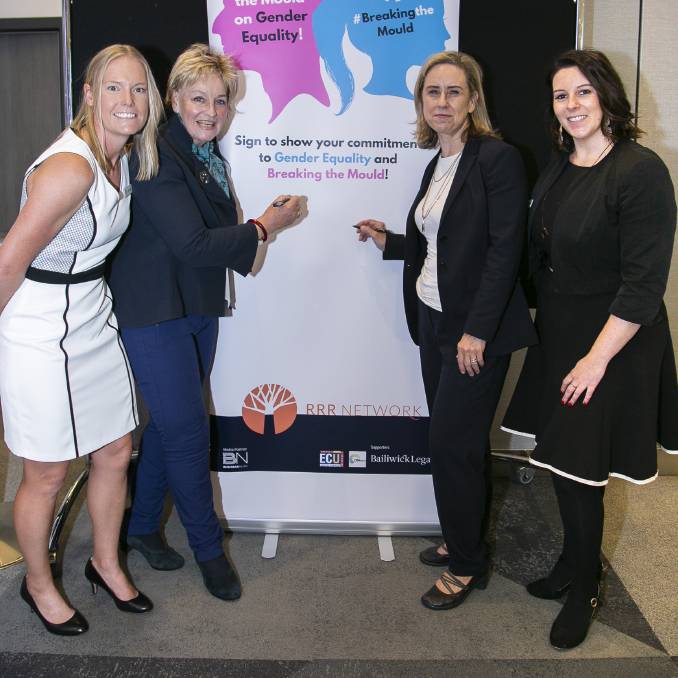 TUESDAY, October 15, was a day that probably didn't have much significance to many people, but for about half of those working and living in rural and regional Western Australia and Australia, it was a special and important day.

This day was International Day of Rural Women, which recognises and celebrates women in rural communities who are making a difference, because for a long time they were not recognised.

Until 1994 women were not legally classified as 'farmers' but as domestics, helpers and farmers' wives, despite doing about half the farm and house work combined as their male counterparts.

On this day, it seemed fitting that the Royal Regional and Remote (RRR) Women's Network of WA would host the Breaking the Gender Equality Mould lunch, which discussed the challenge and need for achieving gender equality in rural and regional WA workplaces.

Almost 130 people, mainly women, attended the lunch where they heard how companies in the mining and resources sector - Fortescue Metals Group, BHP Billiton and Deloitte - have successfully implemented plans and strategies to have a more gender balanced workplace and the benefits it has had on business outcomes and the workplace environment.

While attracting women to employment positions seemed to be relatively easy, retaining the female working population proved to be a major issue for corporations.

Such plans in place were also found to benefit men who wanted more balance between their work and family life.

Deloitte office managing partner Michael McNulty spoke about how the company had started to address how taking parental leave limited a person's chance of being promoted and now about 10 per cent of Deloitte's partner intake are on parental leave.

Fortescue has built a 24-hours-a-day, seven-days-a-week childcare centre at its head office in Perth.

It also has a program 'CEO for a Day' where an aspiring Aboriginal leader shadows the chief executive officer for a day.

BHP Billiton has the bold ambition to achieve a 50pc global female workforce by 2025 and looks on track to meet that goal.

"This is about transforming our whole society for the benefit of all men and women," Ms MacTiernan said.

"You do need that diversity of experience to operate successfully - I think in any sector, you need to have diverse voices coming into the decision making."

Ms MacTiernan revealed some of the gender imbalance within one of her portfolios, Ports, where the only female chief executive officer in one of the eight port authorities is not paid the same as the males in the same job title.

"(This) has really puzzled us and we are of course embarking on addressing that, it really shocked me that you would have a person operating at similar or greater level and not being remunerated," Ms MacTiernan said.

She said she had seen the benefits of having greater gender parity in the agriculture industry.

Ms McGurk said that while International Day of Rural Women was a day to celebrate women's achievements, it was also about understanding the importance of gender equity, where it doesn't apply and how to address that.

"Gender equity is not only the right thing to do but it's the smart thing to do," Ms McGurk said.

"The business case for diversity in decision making is well established and I actually think that in many of our larger employers, for instance some in the resources sector that have their headquarters in WA, have some ambitious plans around gender equity.

"These companies understand that if they want to be the employer of choice, they have to start to really gain an understanding of the barriers to women to attract them into their industry and particular companies and also retaining those women over their working lifetime.

"But also for men, who sometimes want to be more of a part of raising their family and they will choose to work for companies who are genuinely committed to making their lives easier in terms of family responsibilities."

Income between men and women is relatively even in the agriculture industry, suggesting the industry is on the path for having gender equity.

According to the Australian Bureau of Agricultural and Research Economics, in 2016 women made up 32pc of the agricultural workforce.

In 2018 agriculture was one of the industries that had the most similar median hourly earnings for men and women employees.

Statistics from the 2019 Women's Report Card, released by the WA Department of Communities and which highlighted some of the barriers and concerns of gender inequality, found that from 2007-16 women were more highly educated than men and 59pc of domestic university students in WA were women.

The gender pay gap has historically been higher in WA than Australia, with the State gap being 21.8pc compared to 14pc nationally.

Superannuation has been raised as a major issue for women and they are half as likely to have any superannuation than men, as they tend to work less hours and fewer years and earn less on average, due to having and raising children.