WA woolgrower Andrew Scanlon has done the math and says his Merino gross margin beats that of meat sheep breeds. 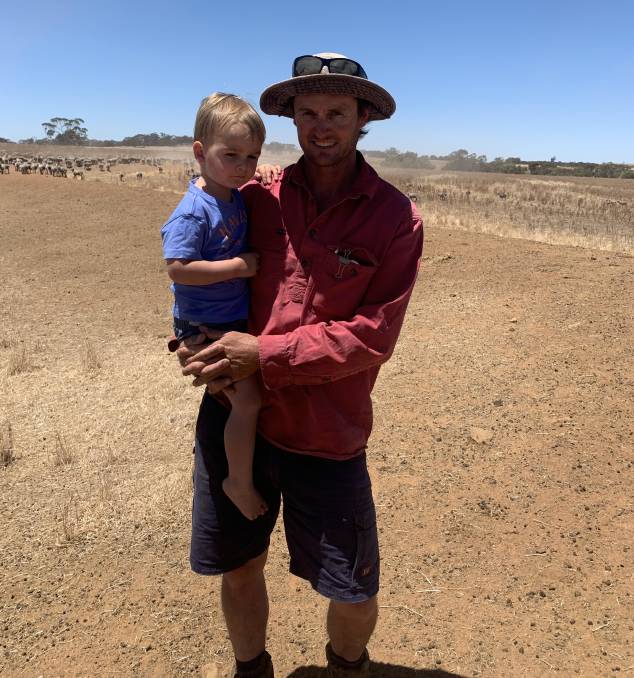 Andrew Scanlon (pictured with his son, Henry) benchmarks his wool and farming operations and says Merinos are still the best performing sheep breed.

WAGIN farmer Andrew Scanlon doesn't mince his words, farming is his business and he runs Merinos because they are the most profitable breed.

"I'm not here for lifestyle reasons, I'm here to earn a quid so it comes down to functionality and what earns the most money," Mr Scanlon said.

"I've not seen any WA benchmarking information that says anything beats a Merino.

"If you do swap out your wool for a meat component, then you don't get the lambing percentages to compensate for it.

"Wool accounted for 55 per cent of our sheep income last year, even with record sheep prices and wool prices coming off, so why would I compromise the 55pc to 'theoretically' increase the 45pc?"

Andrew and Tegan Scanlon run a mixed cropping and livestock enterprise across 4000 hectares at Quailerup, south west of Wagin, WA.

They crop a 2200ha program and run 7000 Merino ewes, with any culls used in a small crossbred operation.

Currently in a 60/40 cropping to livestock split, the Scanlons are making some big changes to introduce high input pastures and increase their stocking rate.

In the short-term, this will increase the cropping component of the business to 70pc, but the overall goal is to return to a 60/40 split.

Mr Scanlon said they planned to seed their pasture-paddocks with ryegrass and oats before applying high input levels of fertiliser and urea.

"At the moment our stocking rate is 11DSE and we're hoping to go plus 15DSE, it won't help our sheep gross margin all that much, but we'll get a few hundred hectares of extra crop in," he said.

"I will need to increase ewe numbers to get back to that 60/40 mix, as we'll need that to help us to deal with weedy paddocks.

"The other term for weeds is grass, which is very useful for the other 40pc of our farm."

The Scanlons have been benchmarking since 2002 and Andrew is a big advocate, believing that without it, farmers are "flying blind".

They are part of a benchmarking group with 65 other farmers, comparing notes and sharing information for the betterment of their enterprises.

"That's because sheep are usually just a fallow tool in most farms, whereas our sheep gross margin is well ahead - it's beaten canola and has beaten barley in the past and most likely will again this year."

On their patch, an adjusted routine for lambing in order to increase stocking rates begins with joining in February/March at 2pc (slightly more with maiden ewes)

Lambs receive 3 in 1, Eryvac and Gudair over the cradle and Weanerguard at weaning and all the ewes will get a booster going forward, to help them manage the protein hit from the high input pastures.

Their average lambing percentage sits at around 90pc, with lambs weaned just before harvest onto standing lupin stubble, another method which they have found valuable.

"That's been revolutionary," he said.

"You essentially prolong their spring putting them on the lupin stubble. The big issue with late lambing is weaner survival, so this makes a huge difference and gets them going."

They buy lupins in for supplementary feed, albeit seed a couple of paddocks for the lambs (using the ratio of 40 lambs/ha).

The ewe lambs are put on stubbles when they are strong enough, with the rest of the lupin feed directed to the wethers.

All lambs are held carried through until shearing, which takes place in February/March and as soon as they are deemed ready, two thirds of the wethers are sold to the export market. The remainder are ideally sold before green feed appears.

"The more you feed them, the more you earn - that's the good thing about the gross margin at the moment."

The Scanlons wool clip averages 19 micron and is marketed straight after shearing.

Mr Scanlon focuses on kilograms per hectare as opposed to cut per head and he's not one to dwell on sale results but prefers to look at the bigger picture.

"Production is king, regardless of whether it's cropping or sheep," he said.

"There's plenty of money in in Merinos. People are quick to blame sheep for not making any money, but it's all to do with management.

"I would happily go 100pc sheep if it wasn't so hard over summer. We had a pretty good sheep year last year and I spent one year's allocation of machinery money on my sheep enterprise and completely updated our infrastructure with new yards, weights, scales, laneways.

"With that, I've set my farm up for my generation and possibly the next one - for the same price of only one year's worth of machinery.

"That's the part that's annoying about cropping, you don't keep your money, but with sheep, it all goes back into your pocket."