Farmers over the next two weeks will have the opportunity to see the real meaning of 'rocks gone'.

FARMERS have the opportunity to see the real meaning of 'rocks gone'.

Perth-based Rocks Gone, headed up by former Yuna farmer Tim Pannell, has an extensive demonstration program throughout the Wheatbelt this month to showcase the new H4 hydraulic Reefinator.

The demo model is the fourth machine built following three prototypes which notched up 2500 hours of work with contractors.

"We got all the feedback about the performance of the machines and we only had to make small changes to the hydraulics," Mr Pannell said.

"There were no structural changes."

According to Mr Pannell, the Reefinator is being pitched at farmers and contractors and its presence on the market has opened up a big opportunity to renovate thousands of hectares of croppable land that has always been designated as 'non-rippable'.

"There's a lot of rock just under the soil that conventional rippers are not designed to handle," Mr Pannell said. Rocks Gone principal Tim Pannell testing the strength of rocks. "Sometimes we're told it's a limestone ridge when it's actually sedimentary rock like this, which can contain granite and quartz rock which is hundreds of millions of years old," Mr Pannell said. "It can be confusing looking at white sedimentary rock and thinking it is limestone."

"Most emphasis on ripping has been on the sandplain so there's an opportunity to open up huge areas where ripping has never been done.

"I think it's a game-change for heavy soils and sand-over-gravels or sedimentary stone.

"We can reefinate and deep rip which will open up compacted soils to moisture infiltration and aeration.

"There's also huge implications for renovating pastures and increasing soil fertility, which I would suggest would happen in spring to provide a summer feed flush for stock."

In last week's demonstration in heavy and rocky red country at east Yuna, the three metre-wide Reefinator showed why it is so impressive.

It was pulled by a Versatile Scraper Special in a paddock of white sedimentary rock containing granite and quartz and left the soil smooth with broken rock mixed in.

The new Reefinator is fitted with four leading tynes and five at the rear with a new cable-suspended levelling blade that, in operation, levels the soil and crushed rock as you go.

The following ribbed drum (which weighs 30 tonnes when full of water) and the arms are the same as the previous model.

The cable design was the preferred option to prevent undue stress on the hydraulic cylinders, while the tynes are hinged on cast steel housing with a 55 millimetre pin.

"The shear pin in the 300 Series had to be designed to break but you could get up to 22.5t before it broke," Mr Pannell said. 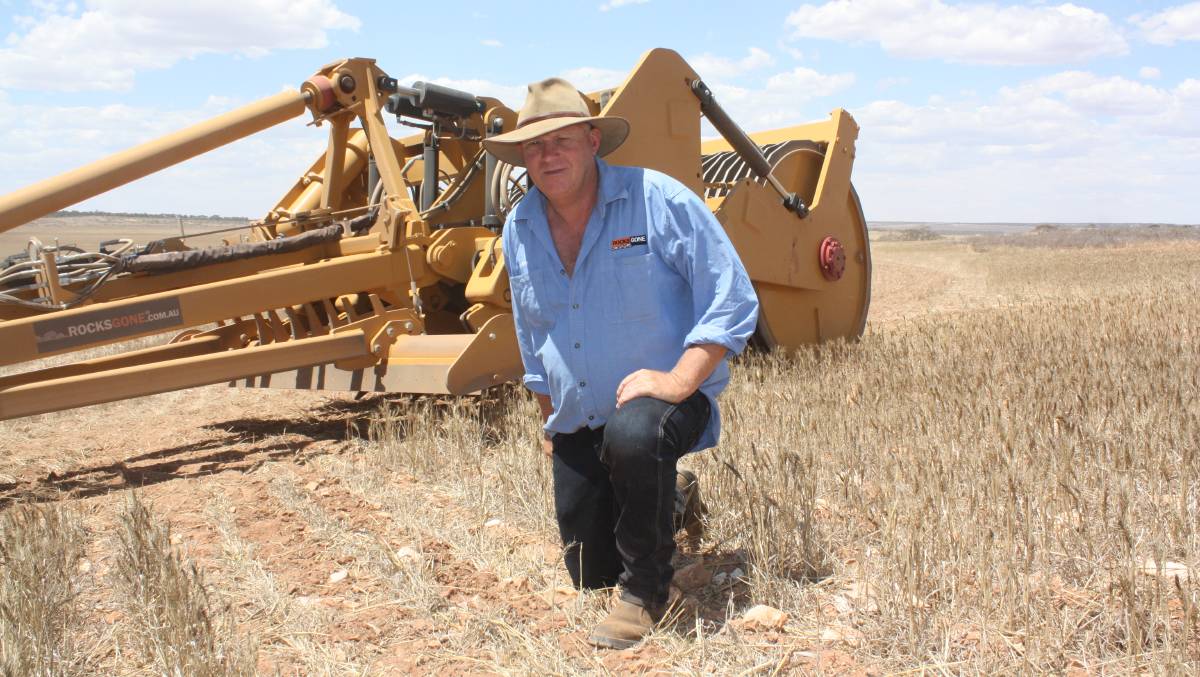 Rocks Gone sales manager Darren Smith said the new Reefinator was ideal for soil renovation work with the ability to deep rip in heavy soils while handling constraints like rocks and stumps.

"With the hydraulics you don't need the shear pin because it's live action process with give and take."

The hydraulic system features a 32 litre accumulator designed to handle up to 3000psi pressure but Mr Pannell said the working pressure range was generally between 1000-1500psi.

"Pressure can ramp up quickly and with smaller hoses, oil can't escape fast enough from the cylinder," he said.

The H4 will dig to a depth of 450mm as opposed to the 200mm maximum depth for the 300 Series, with the ability to raise the front leading rank of tynes to go deeper and quicker.

But you'll require a four-wheel drive tractor with a power rating exceeding 336 kilowatts (450 horsepower), or budget on at least 298kW (400hp) if you have a track machine.

According to Mr Pannell, wheels are better on rocky country, with working speeds between eight and 12 kilometres an hour, depending on conditions.