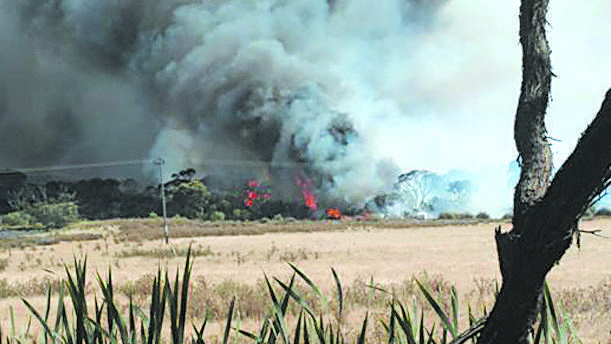 Records are being broken with Western Australia's official bushfire season only weeks' old, including the driest start to the southern season in more than 40 years.

This year's season is also the busiest with WA's firefighting aerial fleet dropping 8.9 million litres of water up to the start of this week in 1493 water drops.

So far the aerial fleet has dropped more than half of the water used during the entirety of the 2018-19 bushfire season.

This week the joint Department of Fire and Emergency Services and Department of Biodiversity, Conservation and Attractions' Parks and Wildlife's aerial fleet officially welcomed the Georgia Peach aircrane, which has been fighting fires in Greece.

The intelligence aircraft are playing increasingly bigger roles with their use of state-of-the-art infrared cameras to provide firefighters on the ground with real-time invaluable information.

Aerial intelligence was integral in the recent firefighting efforts in Yanchep and gave incident controllers on the ground real-time information on the fire shape, hot spots and firefighter vehicle locations to help make critical decisions that saved homes and people from harm.

The imagery also provided intelligence officers at the State Operations Centre with a bird's-eye view of the vegetation and landscape assisting them in analysing fire behaviour.

The fleet is jointly funded by the State and Federal governments through the National Aerial Firefighting Centre.

"It is a welcome sight for many Western Australians to see the Georgia Peach once more in our skies, but I don't think many people appreciate how important a role our aerial intelligence aircraft also provide," said Emergency Services Minister Francis Logan.

"They are equipped with the latest in surveillance technology that allows them to beam images of the fire to the Incident Management Team on the ground," he said.

"The video streaming and fire-mapping conducted by aerial intelligence is critical to making strategic operational decisions during bushfires.

"That mapping and sophisticated view of the fire not only helps the water bombing efforts, but also the management of firefighting resources on the ground.

"Although the aerial fleet is an integral tool in our firefighting arsenal, it's the firefighters on the ground who win us the fight.

"Western Australians, however, must still appreciate the nature and power of bushfires and there will be times when there can never be enough resources just as we have seen with the catastrophic fires over east.

"Everyone needs to play their part to stay safe from bushfires, take five minutes to have a Fire Chat with your loved ones and develop a plan today by visiting firechat.wa.gov.au."

"I'm sure the season will continue to be challenging, but with the expertise of firefighting staff on the ground and the aerial firefighting fleet available to assist these crews in protecting life and property, we are ready to meet the challenge," Mr Cook said.

"Thank you to the hardworking firefighters from the Parks and Wildlife Service, Department of Fire and Emergency Services, local brigades and volunteer firefighters. I wish you all a safe bushfire season."