Tributes from Western Australia's agriculture sector have flowed for one of its most highly regarded public sector leaders and advocate at State and Federal levels. 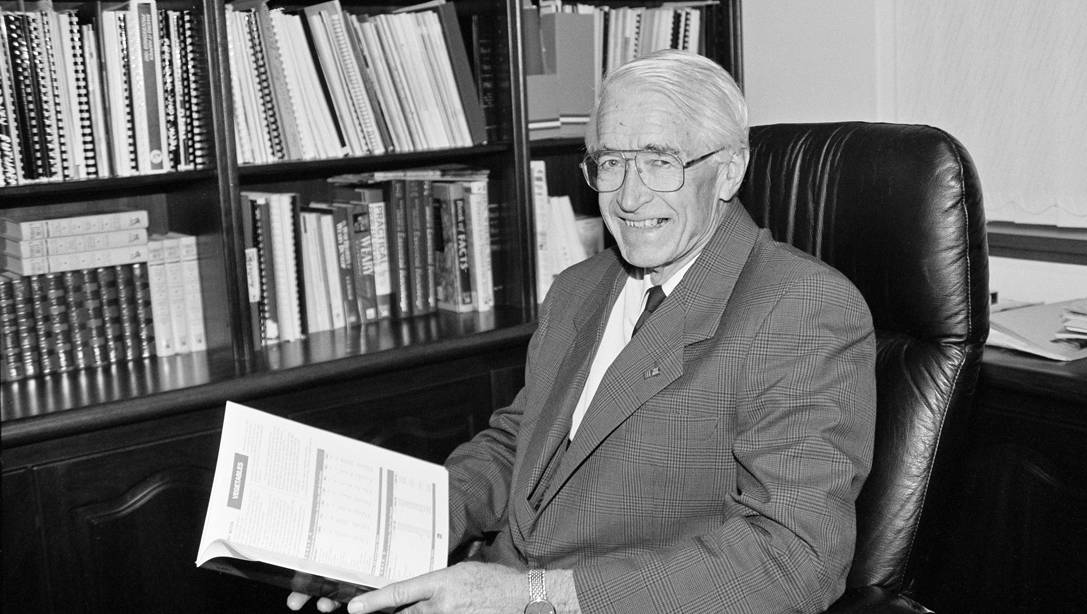 Former WA Department of Agriculture director Noel Fitzpatrick who died earlier this month. Highly regarded as a soil researcher and administrator, Mr Fitzpatrick is pictured in his study at home shortly after his retirement when he was researching a history of the department which he published in 2011.

TRIBUTES from Western Australia's agriculture sector have flowed for one of its most highly regarded public sector leaders and advocate at State and Federal levels.

Edgar Noel Fitzpatrick, known as Noel, who was director of the WA Department of Agriculture for 13 years from 1971, died in Perth on Friday, December 6.

A farmer's son, he was born in 1929 at Narembeen and joined the agriculture department after graduating from The University of WA with a bachelor degree of science in agriculture in 1951.

That was the start of an illustrious scientific career, including important research into pastures and soil nutrition of then newly cleared land in the State's south in the 1950s and early 1960s.

In 1963, he moved into administration as the department's first scientific liaison officer.

In 1984 he moved across to the Federal sphere, becoming the deputy secretary of the Commonwealth Department of Primary Industry and during his tenure there he helped establish the Bureau of Rural Science.

In 1988, he became the inaugural president of the Murray-Darling Basin Commission.

During retirement Mr Fitzpatrick wrote 'In Response to Need: A history of the Western Australian Department of Agriculture from 1894 to 2008' which has become a great reference source for many department officers.

He was appointed a Member of the Order of Australia and inducted into the Royal Agricultural Society of Western Australia (RASWA) Hall of Fame in 2006.

The Noel Fitzpatrick medal awarded at the annual Young Professionals in Agriculture Forum, run by the Ag Institute Australia WA division and the Department of Primary Industries and Regional Development, is named in his honour.

Mr Fitzpatrick was a Fellow of the WA division of Ag Institute Australia.

His RASWA Hall of Fame citation noted Mr Fitzpatrick's years as agriculture department director "was a period of great change in agriculture, particularly in cropping, and he positioned WA well to transform from a relatively minor producer of wheat to a major contributor through his strong foresight and capacity to be ahead of the issues of the day".

"He believed passionately in attracting the best research talents to the department and supported them with persuasive leadership and foresight," his citation states.

Fellow RASWA hall of famer and a driving force behind creation of the Kondinin Group, Bill Henderson, in a tribute praised Mr Fitzpatrick's support for the group and his "contribution to soil science, particularly for those of us who farmed element deficient lighter land in the grain belt".

"As director of agriculture he maintained an interest in the Kondinin Group and followed our humble efforts in the 1960s (and) generously provided professional assistance to keep us going," Mr Henderson said.

He described Mr Fitzpatrick as a friend and near neighbour since school days and a "top student, sportsman and later an excellent administrator".

The WA division of the Ag Institute Australia described him as "a giant of Australian agricultural research and development".

Viticultural scientist acknowledged as a founder of the Margaret River wine region, John Gladstones described Mr Fitzpatrick as a "wise administrator who guided the WA Department of Agriculture through a golden age of fruitful research".