Lawson Armstrong and Laura Bailey are living their dream on a small farm in Rosa Brook - and though their operation is relatively young they have had plenty of time to forge some big plans for the future. LAWSON Armstrong and Laura Bailey are living their dream on a small farm in Rosa Brook - and though their operation is relatively young they have had plenty of time to forge some big plans for the future.

The couple's business, Margaret River Organic Farmer, allows them to pursue Lawson's passion for organics and regenerative agriculture in combination with Laura's background in sustainability and permaculture education.

"Our main aim is to reconnect the dots between a healthy country, a healthy community and healthy animals.''

Mr Armstrong is a fourth-generation farmer who chose a different path away from the family farm in western Victoria.

He has a degree in viticulture and specialised in organic and biodynamic grape growing, before the pull of broader agriculture pushed the family into buying the Rosa Brook farm, 17 kilometres from Margaret River, five years ago.

"He is living his dream of regenerative farming,'' she said. Twelve-year-old Phoebe Armstrong (pictured) and her brother 14-year-old Sholto, are enthusiastic members of the family farming enterprise. The pair regularly help out with cattle herd on their farm, Margaret River Organic Farmer, at Rosa Brook.

Ms Bailey, who moved to the region 13 years ago, is developing an educational component to their farming life - running educational school tours and workshops and other events which teach people about their regenerative farming practices.

"Our aim is to be really transparent about our practices,'' Ms Bailey said.

"We are trying to show people the positive impacts of these biological approaches we use.

"We find that it is great to have those tangible, in-person experiences.

"They are the most meaningful.''

The family runs an open range egg business with about 400 layers on their 65 hectare farm, has about 40 head of grass fed and finished cattle and grows vegetables which they sell in a food shed 50 kilometres from the farm.

Their two eldest children - 14-year-old Sholto and 11-year-old Phoebe are actively involved in helping them manage the livestock - while two-year-old Isabel loves the farm life. 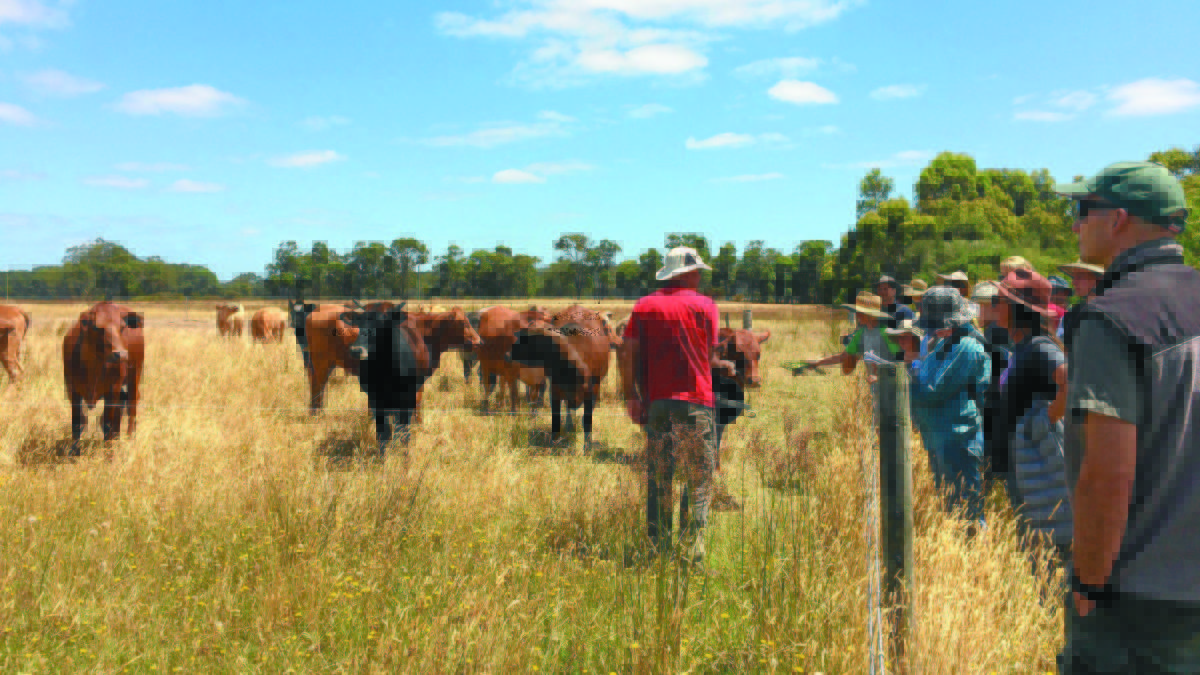 Lawson Armstrong and Laura Bailey are keen hosts of farm tours, field days and school tours and hope to increase their educational offerings next year.

The couple is pursuing organic certification for the property and that of a neighbour with whom they share farm - and to meet the certification they need to stock animals that are born on the farm or sourced from another certified organic farm.

Ms Bailey said for the egg business, day-old chicks were raised for six months up to layers.

"We have got a chicken caravan that has been our main source of income since starting out on the property,'' she said.

"It is purpose-built and pretty fun.''

The size of the cattle herd fluctuates, but the couple is slowly building it up - but is mindful of not going beyond a stocking density that the land can support.

"One thing is different about what we are doing is we are regenerating the pasture by allowing the paddocks to recover,'' Ms Bailey said.

"Between grazings - because we are moving the herd every day - each paddock gets a recovery period of more than 100 days.

"That prevents the over-grazing, soil exposure and degradation that are symptoms of a less-managed system.

"It is working really well."

Ms Bailey said they would like to expand the vegetable growing side of the business.

"We have very limited time for our horticultural stuff, but we hope to get more into that,'' she said.

"We are trying to show that a small-scale, multi-enterprise farming model can really work.

"It can revitalise not only our land, but our communities as well.'' 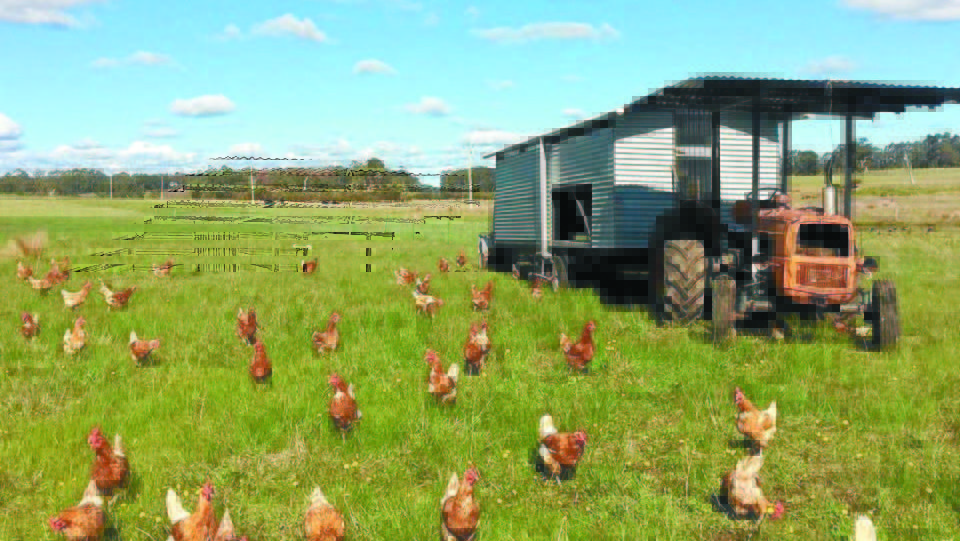 The chicken hotel has been the main sources of income since Margaret River Organic Farmer was set up five years ago. It houses about 40 layers and is moved daily.

This included the daily, planned rotational grazing of the chickens and cattle and leaving residual pasture vegetation as a mulch cover.

The pasture cover - which is incorporating perennials to increase plant diversity - is aimed at building up the soil carbon, growing the soil biology and preventing humus oxidisation, soil erosion and water run-off.

Instead of chemical inputs, they use organic compost, biodynamic preparations and rock dusts.

"Lawson is making all sorts of biological brews and compost teas, so we get as much good stuff out there on the land as we possibly can,'' Ms Bailey said.

"Holistic Management is a very hands-on technique, but the important thing about that is actually being able to monitor what is going on - the dynamic between the animal and the plant and the water.

"You can really see what is happening and you can adapt very quickly to changing conditions.

''So it is a great way of doing it and we are seeing things move along.''

As an example of their progress, Ms Bailey said they had seen a remarkable change in the health of the soils on the property over the past few years.

Recent soil testing showed that total organic carbon levels in the soil had doubled since tests were done in 2014.

"What regenerative agriculture means to us is restoring the resilience of an abundant ecological system,'' she said.

"It means working with nature, rather than against it and not putting onto the landscape our European methods that haven't really worked well over the 100 years or so that we have been doing that.''

Despite being a relatively new and low budget operation, Margaret River Organic Farmer has already caught the eye of the regenerative farming community.

It won a Australian government Landcare farming award at the recent WA Landcare awards, which acknowledged their excellence and leadership in implementing integrated land management practices on-farm that protected soils, water and vegetation.

"It was a really great honour to be considered, let alone to have won a State-wide award, as such a small regenerative operation,'' Ms Bailey said.

"We were totally blown away, it was great.''

Their regenerative approach extends beyond the paddocks too.

The farm has an ephemeral tributary of the Margaret River running through it and Ms Bailey said as part of their regenerative approach the family was working hard to keep it as clean as possible.

"It is a great privilege for us to have one of the cleanest river systems going past us,'' she said.

"Permaculture means looking at things before acting and seeing how nature works in the environment.

"We are regenerating our creek area, for example and this year for the first time we have seen quenda (southern brown bandicoots) back in the environment.

"That is really exciting."

Ms Bailey said interest in regenerative agriculture was growing and they were keen to continue their education offerings after a break over the Christmas holidays.

"This month we led some wicking bed workshops to show people how to create low water-use, edible gardens and we have some farm tours happening,'' she said.

"We run school tours and open to the public for farm tours to let people see the paddock to plate as a relatable process.

"And we have got all sorts of plans for expanding our workshops and events next year.

"Our events range from landholder consultancies with internationally renowned regenerative farm planners to native bee hotel making workshops for kids and everything in between.

"We are probably trying to get across too many things at the moment,'' she concluded, "but I guess this is our dream come true, so we are very blessed.''