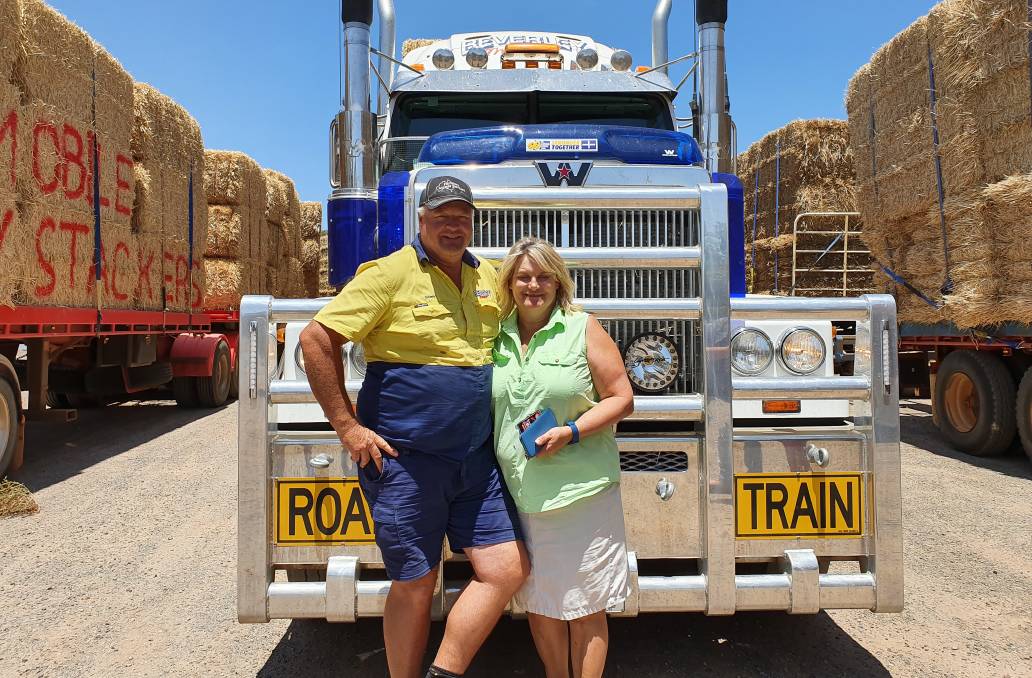 Farmers and owners of Beverley Transport Service Garry and Sarah Miller in front of their truck while stopped south of Kalgoorlie.

Being a transport business owner, it's no surprise that Garry Miller loves trucks.

BEING a transport business owner, it's no surprise that Garry Miller loves trucks.

As I climbed into his near new 4900 FXT Western Star, for the recent Farmers Across Borders Meekatharra Hay Run it was clear Garry was proud of his machine and couldn't wait for a list of questions on trucks to be fired at him.

"I have always loved trucks since I was a kid," Garry said.

"We'd be driving along and see a truck and I'd tell mum exactly what sort of truck it was."

Garry has been driving trucks for about 35 years and, with his wife Sarah, they own and operate Beverley Transport Services with a fleet of five trucks, with four being Western Stars. They also have a 2000 hectare farm at Beverley, which is 100 per cent cropping.

Garry and Sarah experienced the generosity of the agriculture industry when they were dealt with unforeseen circumstances and wanted to do the same for others doing it tough.

"Our farm was burnt out about 35 years ago and people helped us through it, so this (being a part of the 2020 WA hay run) is about giving back when you can," he said.

While the hay run is a feel-good act of kindness and about showing support, Garry said there needs to be more support for farmers and pastoralists in drought.

"It's nice to do what we're doing but it is not enough to really help them and make a difference - they need more," he said.

"Not many people know what is going on up here and what it is really like for them.

"With us doing this hay run, the pastoralists are just happy that someone is taking some notice.

"But it's hard to know where to start because there are so many people that need help."

To show their support, Garry and Sarah helped out by supplying their truck, labour and time for the cause - with two busy businesses to run at home, it was a stellar act of support.

While it was Sarah's first time on a Farmers Across Borders hay run, Garry had been on a run to the WA pastoral region once before.

"I found that people just wanted to have yarn," he said.

"One pastoralist asked us if we wanted to go inside and have a cup of tea and we weren't going to but we ended up going in and I'm glad we did."

The Miller's businesses are split relatively evenly between the farm and trucks (in terms of income), with Garry preferring to spend more time working with the trucks.

"I guess I would rather drive a truck than a tractor, but I don't mind that as well," he said.

"I think truck driving is more social than being on the farm.

"On the farm I might not see someone for a few weeks but in the truck, there's the two-way and I meet other drivers along the way.

"And I get to see all different parts of Australia."

As loyal customers of Western Star trucks, Garry and Sarah travelled to Portland, in the United States, last year to see them being manufactured.

"I was very impressed with the way they were built from the ground up," he said.

"Each truck has a range of different specs and is built to individual specs right from the start."

Like most businesses, Garry and Sarah value their staff but were given a major scare when one of their former drivers had a major accident on the way to Geraldton.

"It's a truck driver's worst nightmare that someone will drive into you and thankfully it hasn't happened to me, but it does happen and we think that's what happened to one of our drivers at the time," Garry said.

"The truck ended up catching fire and he (the truck driver) was trapped for seven hours and thankfully he survived.

"People just don't understand the size of these things and how much we can and can't see."