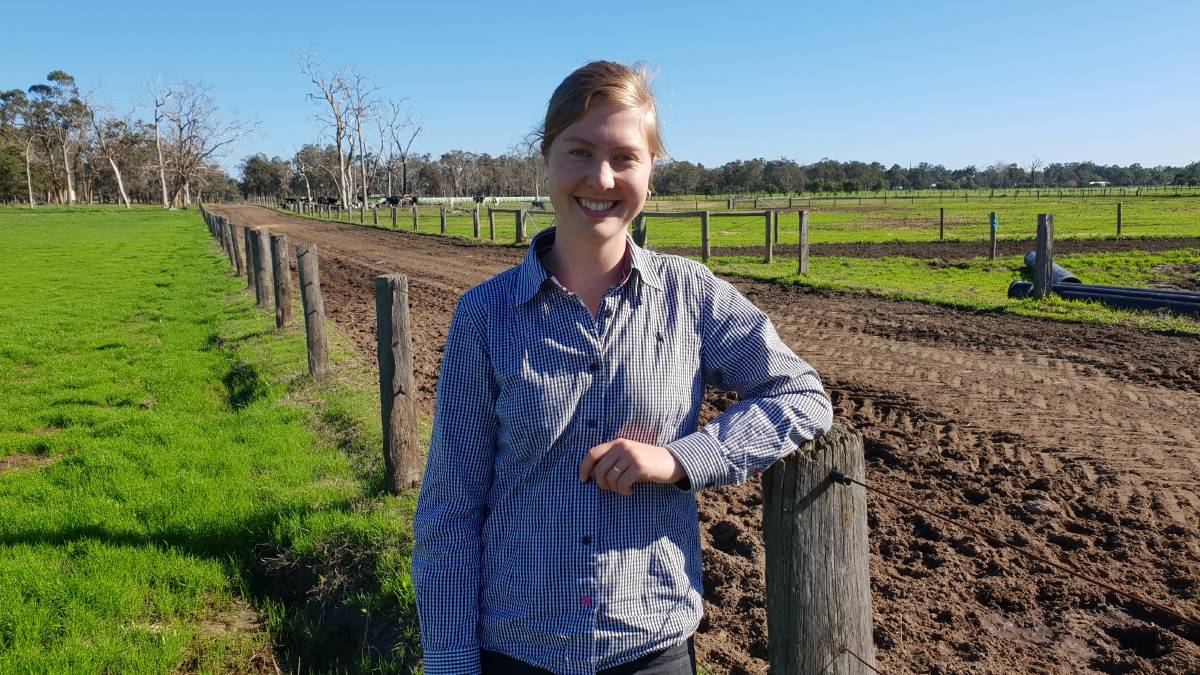 Having grown up on a dairy farm Roxy Schoof, 23, now helps and encourages young people from a similar background to remain in a vital rural industry where the numbers of older participants are shrinking.

HAVING grown up on a dairy farm Roxy Schoof, 23, now helps and encourages young people from a similar background to remain in a vital rural industry where the numbers of older participants are shrinking.

Western Dairy has reorganised in the past 12 months with some of its team moving to contracting their services and the Western Australian branch of the national dairy farming representative body identifying more as an arm of Dairy Australia.

The reorganisation saw Ms Andony become Western Dairy's regional extension officer, responsible for its portfolio of extension activities and events and clearing the way for her Young Dairy helper in Ms Schoof to take on the co-ordinator role part time.

Part-time work suits Ms Schoof at present, she and husband Vaughn are expecting their second child within a matter of weeks.

They have a daughter, Hazel, aged 20 months.

The couple lives at Kendenup where Mr Schoof works for respected sheep breeder and woolgrower AH Hall & Co, Tenterden, as a farm hand on cropping and sheep enterprises.

"The part-time role as Young Dairy co-ordinator gives me the flexibility I need with Hazel and with another baby coming, while it allows me to maintain an active contact with the dairy industry which I love," Ms Schoof said.

She grew up raising calves and helping milk her family's milking herd of usually about 200 Holstein cows on a small farm at Redmond near Albany owned by her parents Pieter and Annette Mostert.

A middle child with two older brothers and two younger brothers, Ms Schoof said her main roles were helping her mother with the calves and her father with afternoon milking in the old 11-a-side Herringbone shed they still use.

"The routine in the shed and raising the calves was where my interest in dairy was centred," she recalled.

"I really enjoy working with the animals.

"Tractor work, growing pastures, cutting silage and worrying about which paddock the herd is going into - I left all that to the boys."

"The farm is still going, my older brother Troy runs it now.

"I visit about once a month but I don't have to go and milk cows now."

After primary and secondary schools, Ms Schoof completed years 11 and 12 at WA College of Agriculture, Denmark and thoroughly endorses the mix of classroom theory and hands-on animal husbandry it offers.

"I believe the dual roles of teaching the practical side, which is needed to help run the farm (students are involved in the day-to-day operation of the college's 580 hectare mixed farming enterprise) and teaching the theory behind the practice really gives students the best understanding and grounding in all aspects of agriculture," she said.

"I really thrived in that academic and practical environment."

Ms Schoof was dux of her 2014 graduation year at Denmark agricultural college.

The same year she was also named inaugural student winner at the Farmer of the Year awards - national awards - having been encouraged by deputy principal Kevin Osborne to enter because of her all-round abilities.

After college she attended Murdoch University, graduating in 2018 with a bachelor degree in science, majoring in animal science.

Here, Ms Schoof was following in the footsteps of her mentor Ms Andony - both grew up on dairy farms and both obtained science degrees at Murdoch.

While still at university she met Vaughn, they were married before she graduated and started their family soon after.

Ms Schoof sees her role of Young Dairy co-ordinator as an important one for the future of the WA dairy industry.

"We are encouraging young people - not just those who come off farms or who work on farms, but people who have an interest in dairy, to continue to be involved by providing them with as much of the latest information that we can to help them," she said.

That approach seems to be working.

The WA Young Dairy network maintains a core group of about 40 members and a wider associate membership of about 100 which, if anything, is growing.

This is in stark contrast to the numbers trend for older generation dairy farmers.

Five years ago there were 160 dairy farms businesses in WA, now there are about 140 run by some 131 dairy farmers.

Rising stock feed costs and water shortages in the past two years have added to a general dissatisfaction with farmgate prices for milk from the State's three processors going back more than six years.

It has caused many older dairy farmers to question whether they want to continue in the industry.

Each retirement causes a flurry of interest from other dairy farmers looking at whether they can change processor to improve farm returns.

Brownes Dairy - five years ago a despised third option for farmers after it refused to renew contracts for some of its best suppliers - is now a preferred processor providing a wider range of pricing and contract options than its competitors Lactalis, which owns Harvey Fresh and Mengniu Dairy which last year purchased Lion Dairy-producing Masters brand milk.

As co-ordinator of the Young Dairy network Ms Schoof aims to hold six events a year.

"Four of them are of a technical nature - about aspects of dairy - and two have a social focus," she said.

"We ask the young people who come along to our events what ideas they might have for future events or what technical issues they might want to be the focus of a future event and we then try to make that happen wherever possible.

"Training people, sharing knowledge, being able to discuss issues with other people in similar situations are all important tools to encouraging young people who are the future of the dairy industry."

Ms Schoof acknowledges the social events are also important for young people actively involved in the dairy industry because the unrelenting seven-day-a-week routine of early starts and morning and afternoon milkings sometimes made a "normal" social life with people outside of the industry difficult to maintain.

Most recently she has been encouraging Young Dairy members - the Young Dairy network is aimed at industry people aged up to 35 - to apply for sponsorship to attend the Australian Dairy Conference in Melbourne on Thursday and Friday next week, with the option of a two-day tour of Victoria's Western District dairy area ahead of the conference.

The successful applicant, also a past Farm Weekly Young Gun, was Zak Hortin, 30, who helps run his family's progressive dairy operation at Torbay, near Denmark.

He will have his conference registration, travel and accommodation expenses covered by the sponsorship.

Ms Schoof's ultimate aim is for the couple to one day own their own farm and be able to put their combined knowledge and skills to use for themselves and their family.

While she loves dairying, Ms Schoof is pragmatic enough to realise that they may not be able to afford to buy a dairy farm, so at this stage, her plan is simply to own a farm with a livestock enterprise.