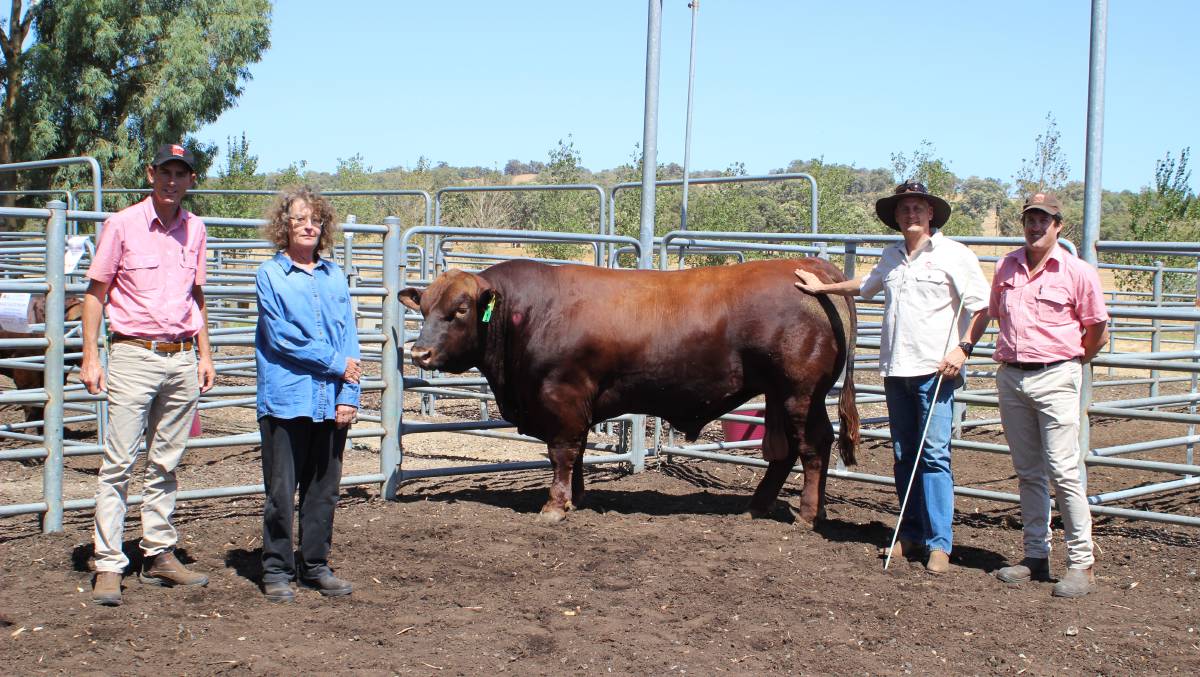 Once again, the Cranston (Kingslane) and Bennett (Magic Valley) families joined forces to present their bulls in the one location, ensuring the 21 registered buyers were presented with an extremely even line-up.

The two studs' offering was widely described by agents and buyers as the best line-up of Red Angus bulls they have seen since the sale's inception and despite the ongoing dry season and subsequent reduced female numbers, this year's sale reflected those thoughts.

The 2020 sale concluded with a 56 per cent clearance achieved for the 29 bulls offered, compared to last year when a 46pc clearance for 46 head was reached.

Another positive was the $4398 average which crept up marginally from last year's $4393 average, while a $7000 top price was obtained and surpassed last year's $5000 top which was achieved on three occasions.

Elders auctioneer Nathan King said the evenness, quality and type of bulls offered was excellent and appreciated by buyers.

"With many producers trying to hold on to their younger heifers, it's probably a year where producers are chasing lower birthweight bulls and is something that's needing to be considered going forward," Mr King said.

"However, the Cranston and Bennett families are definitely getting more shape in the bulls, with wonderful butt profiles and structure on many of this year's sale team. 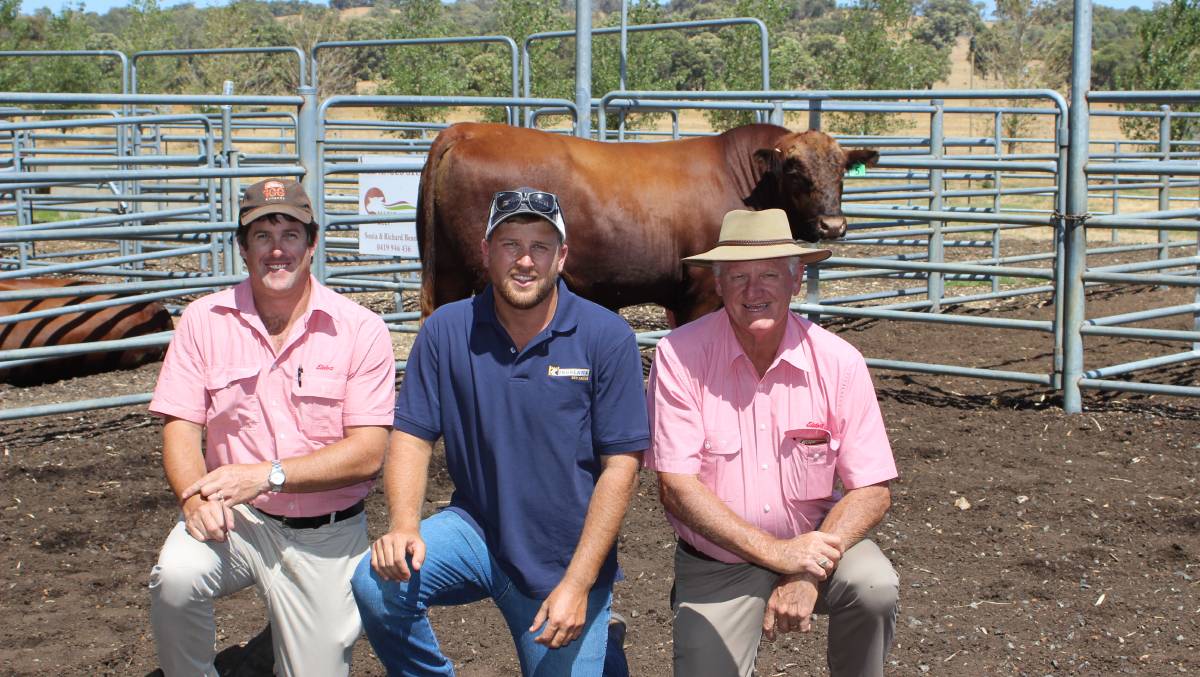 "It was pleasing to see repeat clients back again, some who haven't needed bulls for a number of years because the longevity and structure of these bulls have lasted.

"Given fewer Red Angus herds are now around, today's clearance was pleasing compared to some previous sales, the dry seasonal conditions and the lack of cow numbers around."

Lot one, Magic Valley Pacific P8 was specially selected to lead the sale and that he did, reaching the day's top price of $7000.

The docile, beautifully-shaped sire weighed 910kg and was sired by Red Six Mile Custom Made 505C and out of Magic Valley Lacey L15.

The first bid of $5000 was made by Nannup producer Patricia Fraser, PC Fraser and so was the last, with Elders South West livestock manager Michael Carroll supporting her purchase. 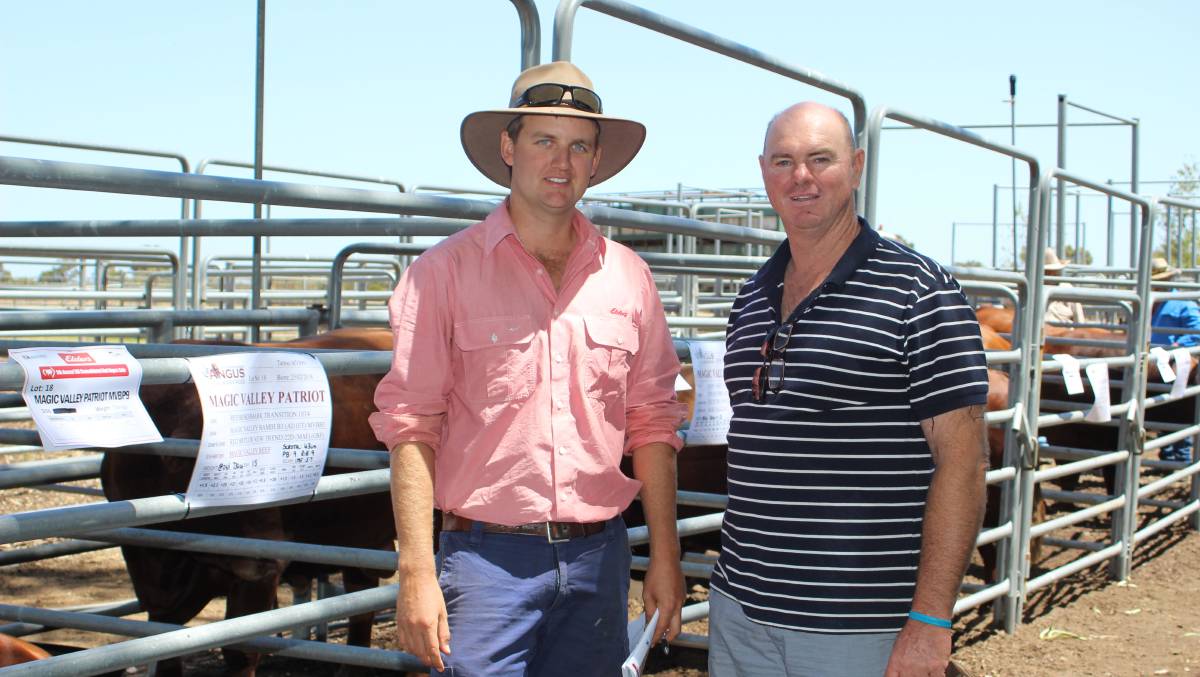 Ms Fraser said she purchased a sire from both studs last year and was chasing an honest bull to join to her Limousin, Angus and Murray Grey cross herd.

All Ms Fraser's calves are grown out and sold as trade cattle at 18 months of age directly to Harvey Beef at approximately 250kg to 280kg dressed.

The structurally correct, well grown, March born was by Red Ter-Ron Parker, out of Kingslane Bella H55 and bought on behalf of Peter Doberstein, Bridgetown.

It was it's 127cm2 EMA, 5.8 IMF score and its outcross of genetics within the stud that interested Mr Doberstein most.

Mr Allen said Mr Doberstein purchased here last year and was keen to get his hands on this particular bull for its genetics, depth of volume and power.

"It will be joined to mature cows, with the goal to infuse more weight into the calves," Mr Allen said.

Purchasing a soft fleshing sire with ample length and depth for $6250 was LaGrae, Salmon Gums.

The 734kg bull was sired by Red Benchmark Transition and out of Magic Valley B3.

It had all the great attributes that the Red Angus breed is renowned for, including an EMA of 115cm2 and IMF of 5.7 and an EBV of +1.2 for retail beef yield. Brothers Geoff (left) and Leigh McLarty, Blythewood Pastoral Company, Pinjarra, made the trip down to view the quality bulls that were up for the taking at Monday's sale.

Paying for plenty of meat and muscle was Albany based producers JL & M Belfield.

Early on in the catalogue Mr Johnston selected two well-balanced, smooth coated Kingslane Lionel L2 sons for $4500 each, while securing a Red Benchmark Transition son with an IMF raw data figure of 6.1 for $4000.

Sourcing some strong genetics was PJ Piercey, Waroona, when four Kingslane bulls were knocked down on its account at $4000 each, while returning to buy three at a $4166 average was Yilgarnia Wines, Denmark.

The Denmark winery selected one Magic Valley and two Kingslane bulls and all were by different sires.

H & A Norton & Son, Capel, were back to support the Kingslane offering and with the assistance of Elders local agent Robert Gibbings they got their hands on two stylish types for $4000 each.

Lehmann & Co selected an outcross Kingslane youngster which was sired by McPhee Trophy 36, while the Geddes found a Magic Valley sire further down in the offering weighing 766kg with a top IMF figure of 6.2.