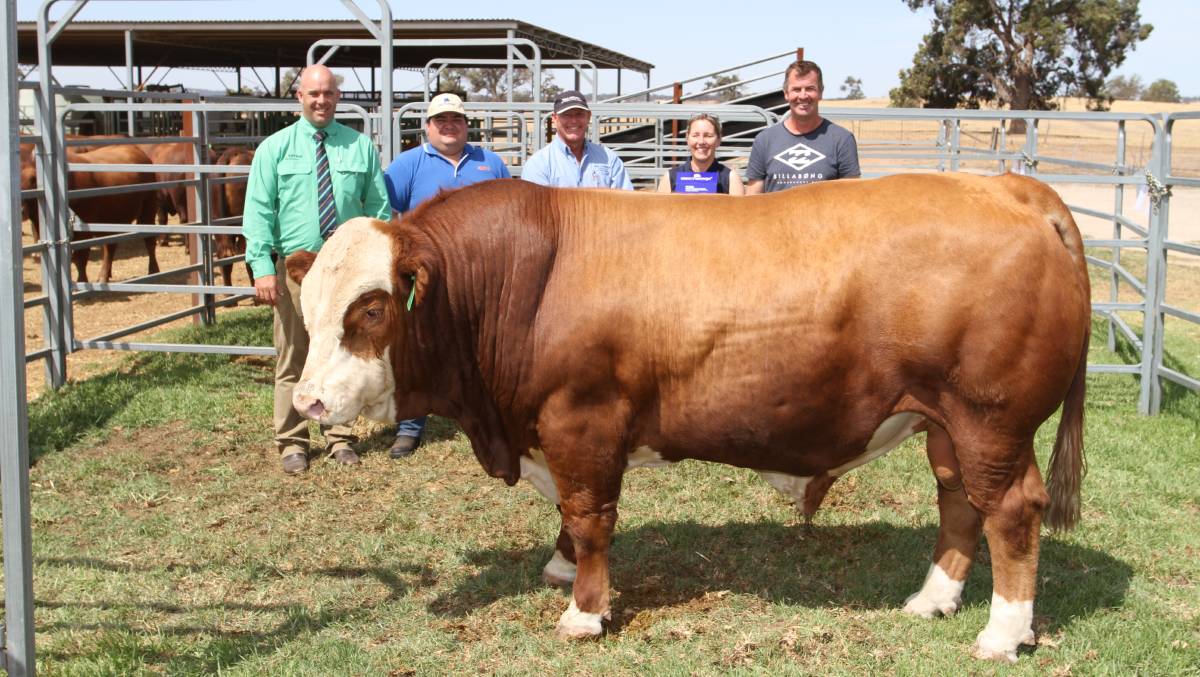 Table turned at bull sale amid a challenging environment for WA beef producers.

AMID a challenging environment for WA beef producers, the Cowcher family turned the table on some adverse bull sales so far this season to record improved results at the 32nd annual Willandra Simmental and Red Angus on-property bull sale at Williams last week.

This year marked the 20th anniversary of the Willandra brand (formerly Quaindering) and another big crowd turned out to inspect the top line-up of 52 traditional Simmental and Red Angus bulls and enjoy the Cowcher family's warm hospitality and popular steak lunch.

A buying list of 33 registrations from local and south west areas and as far as Hyden and Esperance, along with interstate support, were prepared to go the extra yard on their bull selections and help the family celebrate the milestone.

While numbers offered were back slightly on last year, the buoyant sale resulted in an improved clearance and sale returns with the average up $586.

Danny Partridge and Jenny Maye, Tullamore Park Simmental stud, Busselton, returned to the sale for another stud sire and paid the sale's $13,000 top price for their selection in lot three. President is the third Willandra stud sire to join the Tullamore Park stud ranks and Mr Partridge said their new sire provided a fresh family line to the herd and would be joined to the stud's first and second calvers for a late April early May calving.

"This is outcross genetics for us sired by the highest figured bull of that year's drop retained by Willandra," Mr Partridge said.

"He has a good frame and temperament, high growth and EMA and he is polled which is a strong selection point for us."

Despite being penned toward the rear of the catalogue, lot 26 Willandra Panama P164 proved a head turner when it was knocked down for the sale's $11,500 second top price. Another Simmental bull to make five figures was the polled Willandra Prince P107 in lot 13, knocked down to Glenpennant Farms, Manjimup, for $10,250.

The more moderate birthweight bull recorded curve bending growth in the top 1-10pc for all intervals and CW, top 5pc RBY and NT index and top 5-10pc for DM and EM indexes.

Again it was 20-year plus client Gordon Atwell and his son Stephen, Welldon Beef, Williams, who were the sale's volume buyer by a long way.

The Atwells finished the sale with an account totalling seven Simmental bulls and for the first time this year two Red Angus bulls and will join the family's sire battery to cover the 1550 Angus female herd in the forthcoming July joining.

The April-May-drop calves are weaned in December and backgrounded in the paddock for three months before being fed in their own feedlot for 80 to 90 days and turned off at a minimum 500kg liveweight (270-280kg dressed).

Mr Atwell said they were trying something different with the Red Angus bulls over their Angus heifers this year.

Bob and Sandy Boot, who run 130 stud Red Angus breeders, travelled to WA in June with some fellow Victorian Red Angus enthusiasts last year to inspect the Willandra cattle and Mr Boot said they were impressed with what they saw.

"We had a good look around the young bulls and the female herd," he said.

"They are Australian bred bulls, their temperament is very good and I like the Willandra type and structure and they suit our breeding."

Bindoon producers MJ Preston also bid to $6250 for one of two bulls at the sale, a 794kg bull by Willandra Louis L51.