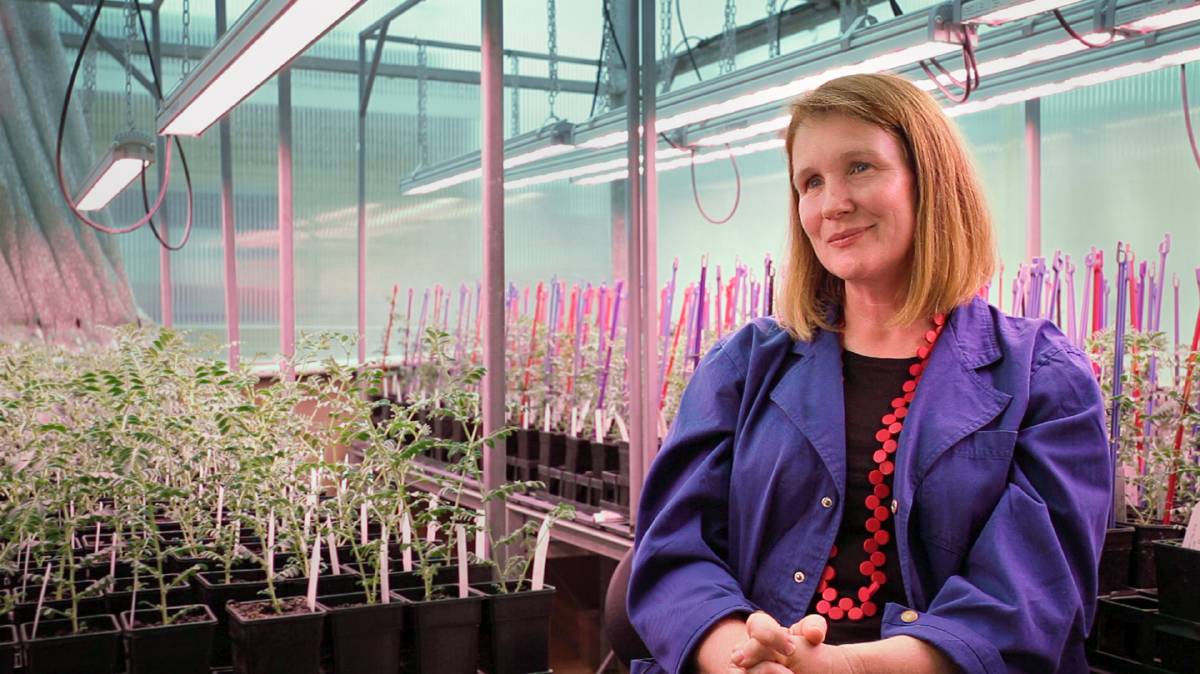 UWA senior research fellow Janine Croser in front of chickpea plants being grown under a combination of daylight and LED lighting.

It is believed that the LED-based techniques being developed will work across other species.

THE breeding time for new pulse lines has been cut by two to three years as the result of world changing research being conducted by scientists at The University of Western Australia (UWA).

A team of researchers from UWA's Centre for Plant Genetics and Breeding has spent the past seven years undertaking Grains Research and Development Corporation (GRDC) and UWA co-funded research to speed the development of purebred seed lines for pulse breeders.

The result is a robust and reliable accelerated-Single Seed Descent Platform for rapid generation turnover.

The research involved the utilisation of new technologies which have only just become affordable, such as LED lighting with adjustable spectral output, to harness ancient responses to light from pulse plants.

"We use LED lighting, set to emit specific wavelengths of light to signal to the plants they're about to be shaded so they need to produce a seed or never pass on genes to the next generation and for a plant that is a pretty serious consequence," Dr Croser said.

When it comes to light, red, blue, green and far red are the main colour spectrums perceived by plants.

If pulses are sitting in a paddock without anything around them, like trees or other plants, they'll be getting almost equal measures of those four colours.

However, as soon as something starts to shade the plants, some or all of the red, blue and green colours are blocked, but far red still gets through to the plant as it can transmit through other structures.

Dr Croser, who is also a farmer from Horsham,Victoria, said the plants know if the ratio of far red that they're experiencing has increased, that must mean there is shade coming or already there and they need to get through their life cycle.

"Normally in a paddock you can get one generation a year and if you put them into a glasshouse you can get two to three generations a year," she said

"But we've developed our accelerated Single Seed Descent platform to a point where we can get, depending on the species, between five and eight generations a year.

"Our research has also optimised a process for germinating immature seed, this enables us to germinate and grow healthy plants from seed harvested 18-20 days after flowering, further shortening the generation cycle."

In terms of normal breeding times, if a cross is made between two parents, one parent might have a disease resistance trait and the other parent might be really well adapted to the local growing area, it usually takes five to six generations of inbreeding before the progeny can be used as a fixed parent again.

This means that after a cross is made, breeders have to cycle through five to six generations before they can use the progeny as a parent in a new cross or reliably screen it for key traits and potentially release it as a cultivar.

Dr Croser said the process of conventional breeding takes anywhere up to 10 to 12 years, depending on what method the breeders are using.

"But we can shave at least two to three years off that timeframe, which means farmers are getting the elite cultivar that they need into their paddocks much faster," she said.

The UWA team is already delivering the technology directly to breeding programs.

"Every year the breeders are sending us key second generation material, we then quickly cycle each line through four generations and send it back to them in a fixed state which they can use straight away, either as parents in a cross or in the paddock to screen."

In the past year, the UWA team has processed more than 16,000 individual plants through this platform.

Efficient use of premium controlled environment space is always a priority, so the team has developed high-throughput growing conditions by restricting the root mass of the plant and, for the taller species, chemically reducing plant height.

From an academic perspective, the program is also having some useful impacts on PhD projects.

"Once upon a time, if students wanted to make a particular cross they would have to wait for two to three years to have fixed progeny to analyse and their PhD was over by the time they had the chance to do analysis," Dr Croser said.

"But now we can make the populations from scratch for students really quickly which gives them the opportunity to develop material and have time to analyse within a three-year project."

The UWA platform is having impact nationwide, with researchers working with key breeding programs around the country, including New South Wales Department of Primary Industries for chickpeas, University of Adelaide for faba beans and Agriculture Victoria for lentils and field peas.

Dr Croser said they were working closely with all four breeding programs to ensure a real world impact.

"We're acting as an engine room to help speed pulse improvement across Australia and we're interacting with key GRDC investments in pre-breeding," she said.

"We're also having visits from people overseas and interstate to look at our platform and technique to get ideas for other species and for other purposes.

"The research that we've done has far reaching implications across pre-breeding and breeding of pulses and is particularly powerful when combined with other new techniques such as marker assisted selection for herbicide tolerance traits."

It is believed that the LED-based techniques being developed will work across other species, including oilseeds and cereals.