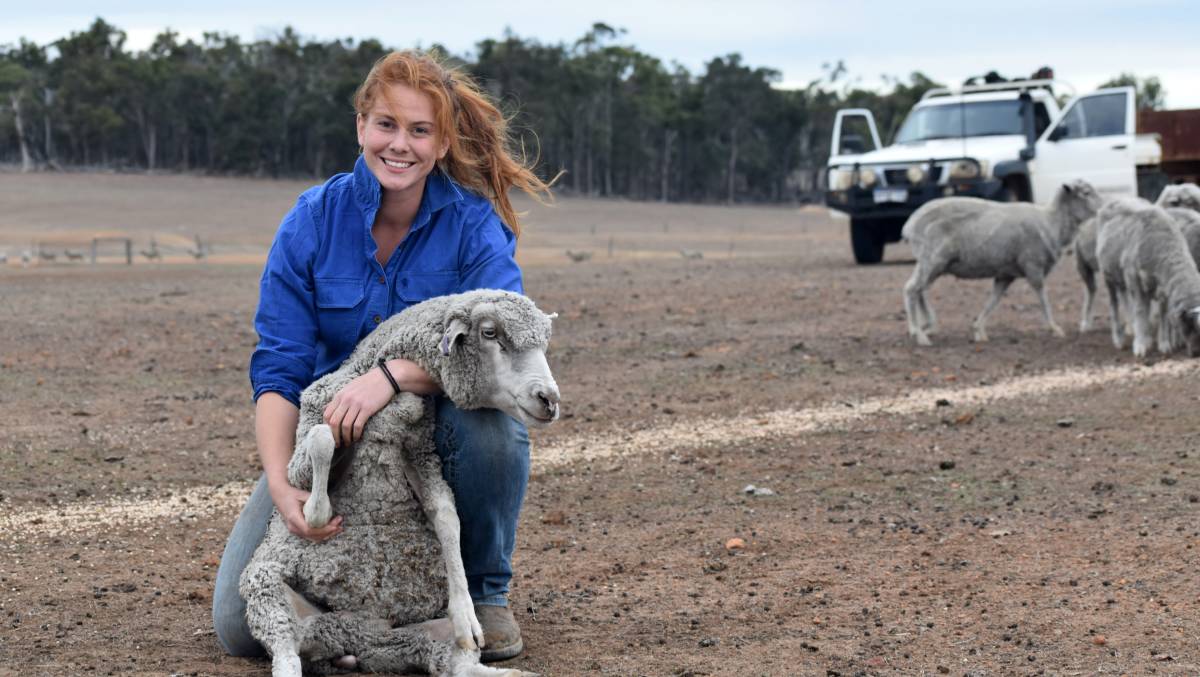 Twenty four-year-old Lauren Smith is passionate about proving one doesn't have to come from an agricultural background, in order to be a part of the industry.

One young animal science student is living proof that you don't have to grow up with an agricultural background in order to be passionate about the industry.

ONE young animal science student is living proof that you don't have to grow up with an agricultural background in order to be passionate about the industry.

Twenty four-year-old Lauren Smith grew up in Tasmania and while she did live on a farm with cows and horses, her upbringing was not remotely based in agriculture.

It was only after she moved to Western Australia, after a gap year in the military, started her animal science degree at Murdoch University and visited her boyfriend's sheep farm at Franklin River in Tasmania, that her passion for the industry was cemented.

Ms Smith said she started her degree with the intention of moving into large animal veterinary science, but after a year she changed her mind.

"I found I really loved the networking and the connectivity of the agricultural industry," Ms Smith said.

"It's such a powerful and strong industry, the pride that farmers have in what they do and the opportunities that exist within ag are just amazing, so after a year of doing animal science I decided I loved the industry and figured it was where I wanted to stay."

Throughout her undergraduate degree, which she completed in 2019, Ms Smith had many opportunities and experiences, including a two-month tour of the United States.

After putting her hand up to help with some meat science research being conducted by Murdoch, she ended up getting involved in meat judging, something in which she truly excelled.

"I ended up being one of five people on the Australian national team who went to the US for the Intercollegiate Meat Judging Contest, where we assessed meat for quality and yield traits and ranked them on a scale," Ms Smith said.

"While I was over there, I did five weeks worth of work experience on a ranch, which was just from talking to people and saying I wanted to extend my stay and was looking for somewhere to work.

"I can't even explain how many opportunities arose from that trip, I learnt so much about the American industry, seeing how completely different they do things, yet the similar ideologies that are behind their production systems."

Ms Smith believes her success at university came down to her willingness to put her hand up for anything and everything that came along.

"It's really just talking to people, saying I'm available, I'm here and I'm willing to learn everything I can from you," she said.

"I went and did a tour of a local farm and asked them if I could help out whenever they needed it, from that I ended up assisting them at a bull sale."

Ms Smith also works as a research technician at Murdoch and earlier this year she started her honours degree full-time, but as a result of coronavirus, she has had to move back to Albany and is hoping to find a job in ag while she's down there.

As part of her honours research project, she is looking into giving producers more feedback from their livestock when they send them to the abattoir.

"In the future, I'd love to head into a consultancy role, when I'm working with producers and processors to show farmers how to produce more efficient animals and make management and breeding decisions to better their production and productivity."

When it comes to her passions within the industry, Ms Smith wants to help close the gap between rural and city by showing non-ag people what is going on with agriculture.

"People don't know how to search for information about our industry that they don't know and there is a lot of information out there, both good and bad, so we need to be helping guide people to that," she said.

"We've been waiting for too long for people to approach us, but what we need to be doing in engaging with non-ag people directly, in an open, honest and completely transparent way."

Ms Smith is also passionate about proving one doesn't have to come from an agricultural background, in order to be a part of the industry.

She said from being at Murdoch, she noticed there were a lot of people studying animal science, who don't have ag backgrounds and thought they wouldn't be able to have a voice within the industry.

"I think that's a fake fear and there's no need for it, there's so many ways you can be involved in ag and young people coming up in the industry who want to be involved just need to have the confidence to do it," Ms Smith said.

"If you're interested in ag or you think you might be passionate about working within food, fibre and fuel production, it's really important you stick up your hand and are willing to say I don't know but I really want to learn."

Overall, Ms Smith believes she's lucky to have worked alongside a lot of young people who are incredibly passionate about making changes within the industry.

"I'm pretty excited to continue in my journey to spread the positive, educational message about agriculture, as well as working within the industry to help better it," she said.