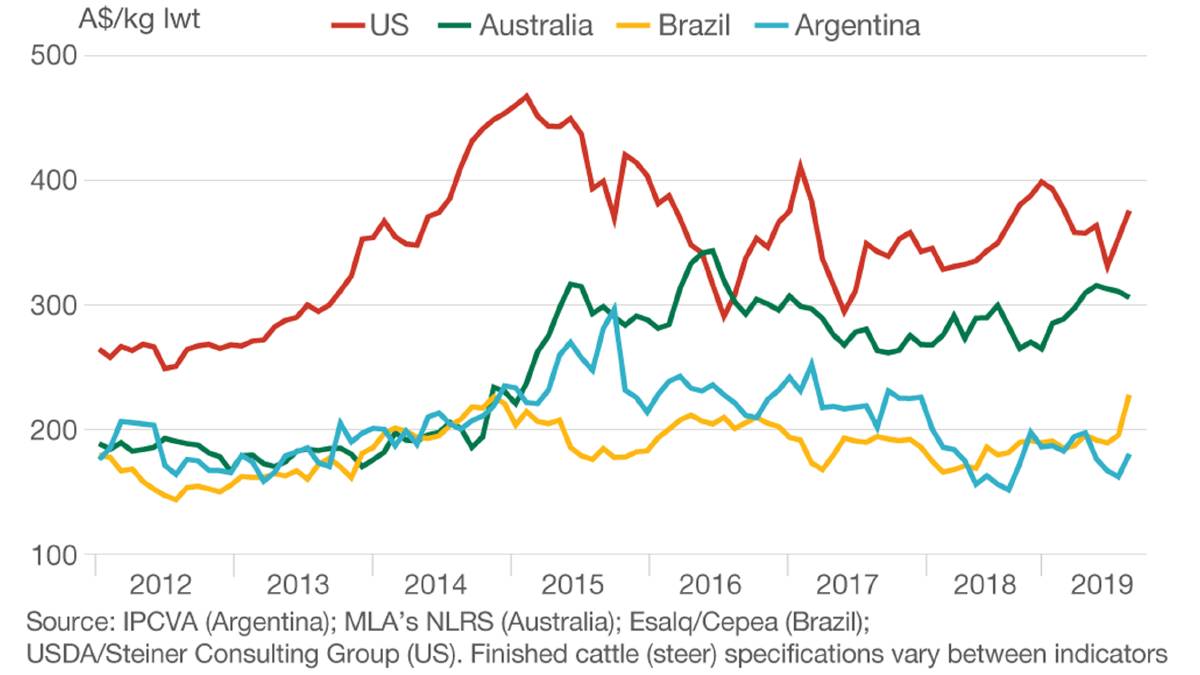 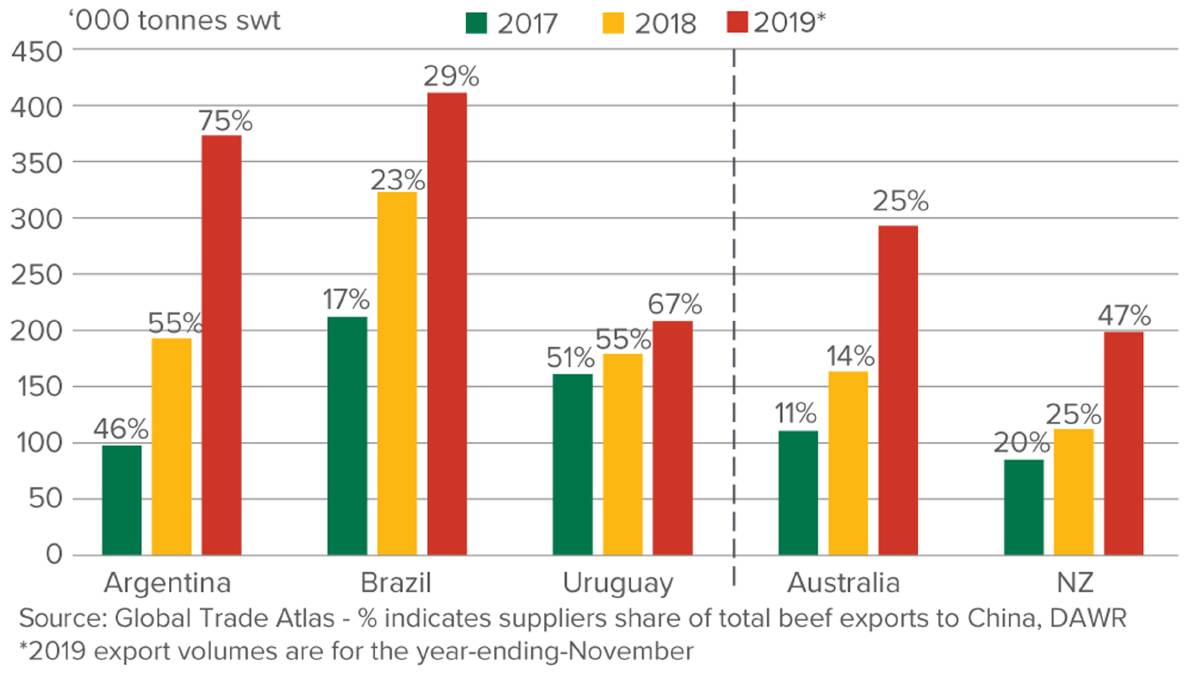 GLOBAL beef demand lifted in 2019 according to Meat and Livestock Australia (MLA) as China further entrenched its position as the world's biggest importer of beef and this looks set to continue in 2020 with Australia set to benefit.

Of the total beef produced nationally in Australia, 70 per cent was exported, with the remaining 30pc going to the domestic market.

Australia produces 4pc of global beef production and accounts for about 16pc of world trade and it has remained one of the top three largest exporters for more than seven decades.

In 2019 Australia was the world's most valuable beef exporter, generating a total of A$10.8 billion in exports.

Over the past 12 months Australia has been the beneficiary of a soft Australian dollar, which has also contributed to 2018-2019 being the most valuable year for beef exports.

According to MLA, cattle industry February projections report Australian beef exports expanded 9pc year-on-year in 2019 to 1.23 millon tonnes shipped weight (swt) with all the additional volume being captured by China.

However not only did the volume of frozen and chilled beef exports rise in 2019, the export unit prices lifted to new highs, averaging A$8.17/kg FOB over the 12 months to November 2019, which was up from A$7.31/kg FOB a year prior, reflecting the softer Australian dollar and strong global demand.

MLA reported the Australian dollar remained soft for the entirety of 2019, lessening the impact of rising cattle prices on international consumers.

However, South American currencies such as the Brazilian real and Argentine peso remained even weaker, reinforcing their export position and making them highly price-competitive in global markets.

Throughout 2019 Australian finished cattle prices crept closer to their US counterparts but diverged towards the end of the year.

Prior to 2015, the Australian cattle prices closely tracked those in South America on a currency adjusted basis, but the separation in markets following the 2014-15 drought has not reversed, partly due to relatively tight supplies of finished cattle in Australia and South American currencies coming under significant downward pressure in recent years. 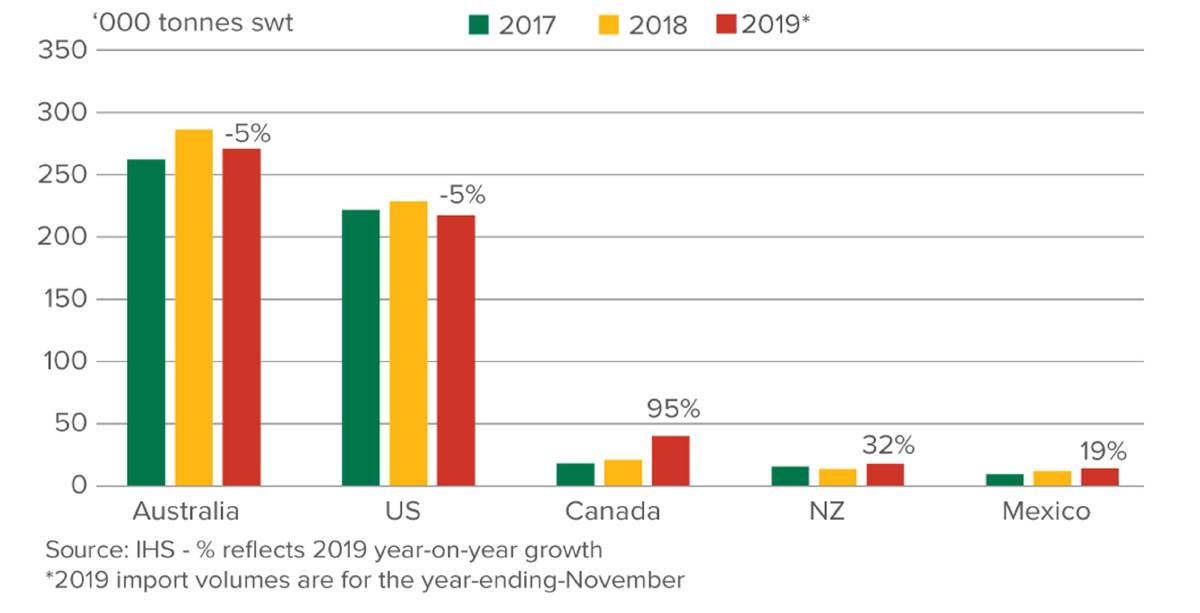 When it comes to market access, Australia has generally improved over the past three decades as a result of multilateral negotiations with the World Trade Organisation (WTO), as well as a series of bilateral and free trade agreements.

Australia has gained some of the best beef access worldwide due to trade reform and high animal health status.

Due to this, Australia now has free trade agreements (FTAs) with the US, Japan, China, Korea and Indonesia.

Following Brexit Australia is looking to gain an FTA with the United Kingdom (UK).

When it came to markets in 2019, MLA said China emerged as the top destination for Australian beef exports, with shipments surpassing 300,000t swt, up 84pc year-on-year.

This increase was underpinned by African swine fever and a swelling affluent consumer class.

MLA reported strong growth was recorded in both premium and lower-value exports alike.

Albeit off a smaller base, chilled exports to China more than doubled to 30,000t swt, while frozen exports increased by 81pc to 270,000t swt.

In the last three months of 2019 monthly beef export volumes to China exceeded 30,000t swt, which resulted in products being drawn away from other markets that struggled to compete on price.

Another market of high importance to Australian beef exports is Japan.

In 2019 Japan relinquished its number one spot as the biggest importer of Australian beef, falling short of shipments to China by 13,000t swt.

According to MLA Australia is the top imported beef supplier to Japan but is set to face stronger competition from the US in 2020 due to improved access.

Frozen manufacturing beef exports (152,000t swt) made up the lion's share of shipments to the US.

MLA said lean Australian trim remained an integral component of the US burger complex, but many grinders in the market had to match the higher bids from China to secure product last year.

Chilled Australian grassfed beef primal shipments to the US grew 5pc in 2019 to 63,200t swt, which accounted for a quarter of beef exports to the US.

Despite a good year for frozen and chilled beef exports in 2019, this year Australian beef is forecast to decline 16pc to 1.03mt swt, one of the lowest levels in recent years, but still higher than any year before 2013, according to MLA.

MLA reports in 2019 Australia shipped 1.3 million head of cattle, which was up 19pc year-on-year.

Feeder exports to Indonesia was again the bedrock of the trade in 2019, increasing 15pc to 676,000 head while feeder and slaughter cattle to Vietnam recorded strong growth, expanding 32pc to 267,000 head.

Outside Indonesia and Vietnam the next biggest importer of Australian cattle was China.

Like frozen and chilled beef exports, live cattle exports are expected to contract in 2020 due to the severely depleted northern herd due to drought.

According to MLA, demand from South East Asia for Australian cattle is expected to remain robust despite increased competition from Indian buffalo meat and Brazilian beef in Indonesia.