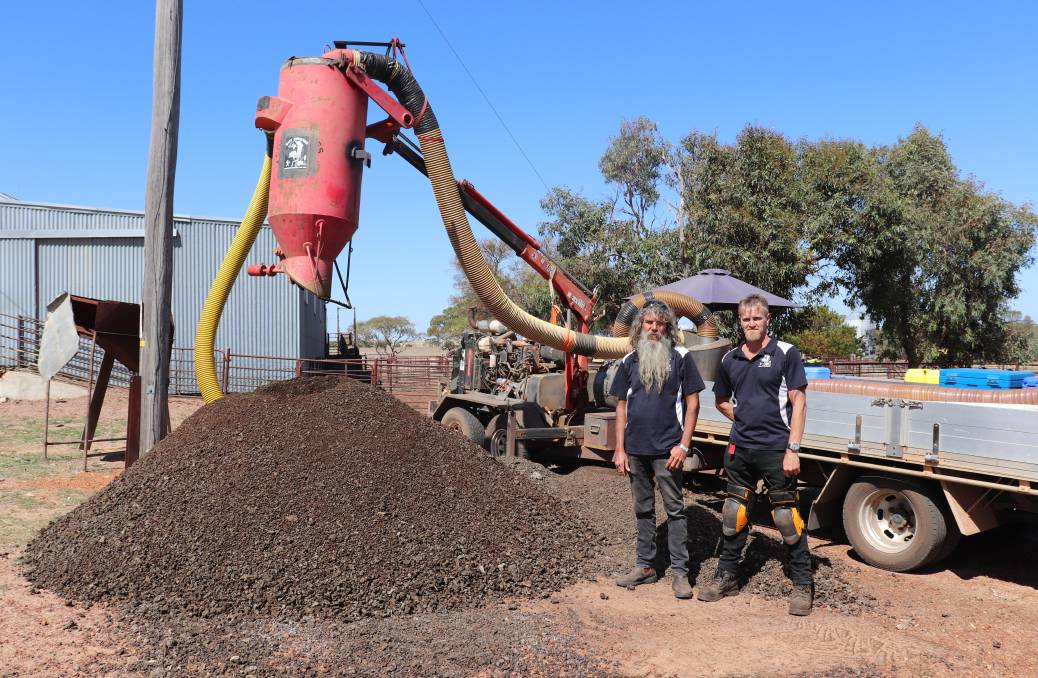 S#!t Suckers employees Baz Welling (left) and Terry Spice on site at a farm near Brookton.

Crawling under a shearing shed with a vacuum cleaner hose to suck sheep manure out doesn't seem appealing to a lot of people.

IT'S a dirty job but someone has to do it.

Crawling under a shearing shed with a vacuum cleaner hose to suck sheep manure out doesn't seem appealing to a lot of people.

In fact it's a struggle to find workers that are willing to deal with "poo" all day long.

Despite the lack of workers cueing up for a stint at it, "business is booming" according to Landpoint Holdings co-director Jack Arundel.

The Western Australian-owned and operated business has a few different operations including "S#!t Suckers", based at Martin, Perth, which began four years ago after he and co-director Peter Chilwell saw a need within the sheep industry for shearing shed cleanouts.

After researching the best options to do the job quickly and efficiently they decided to purchase an industrial diesel powered vacuum cleaner from the mining industry in Queensland for $140,000.

Mr Arundel said it was the only machine of its kind in WA doing the kind of work they do.

The machine is a two-person operated mobile waste remover which has the ability to suck up dry manure, coal dust and sand, as well as sludge at the bottom of water tanks, even if water is still in the tank. Baz Welling operates the S#!t Suckers diesel powered shearing shed cleanout machine and (below) when the machine is full the contents are emptied in a pile ready to be spread out as fertiliser on gardens and pastures.

Mr Arundel is a former sheep and cropping farmer from Kulin before he sold up and moved to Perth about 13 years ago to "do something different".

"While we were visiting farms we saw a demand to clean out shearing sheds.

"We looked around and found a machine from the mining industry that looked like it was going to be suitable and we've been flat out ever since."

Mr Arundel said there were two reasons why there was a need from sheep farmers.

"People don't want to do it themselves," he said.

"It's hard work getting in there with a shovel and they don't have enough labour on farms to allow the time to get it done.

Mr Arundel said mostly they were called in when the farmer wanted to restump the shed and needed it cleaned out quickly.

Some of the sheds were so large and had so much manure underneath that "we've pulled out 150 tonne - 200t out of some sheds - truck load after truck load". Terry Spice under the shearing shed showing how the S#!t Sucker works to clean out unwanted manure piles.

Some of the sheds were in such disrepair that "the poo was holding the floor up".

Demand has come from right across the State from as far as Geraldton in the north to Esperance in the south east and the business is generally booked up for two months in advance.

"We are just that busy," Mr Arundel said.

"We've been flat out since day one."

He said the nature of the job required "blokes to be on the road all week, living out of a suitcase".

His staff include Baz Welling, a former painter and decorator, who has been with the business on and off for three years and Terry Spice, a former glazier, who has been employed for nine months.

Mr Arundel said he tried to arrange a few sheds in one region at a time to limit the travel time as much as possible, but the work seems to find them.

"Once we get into an area it's hard to get out," he said.

Mr Welling said they would "go into a pub at the end of the day wearing our shirts and people start asking questions and before you know it you've got a month's work".

"We went to Kojonup for a job that was meant to take a day and ended up staying for a month because word got around," Mr Welling said. Mr Arundel said there was no easy way of doing the job and it was a good sign that people were happy with the work when they were beginning to get repeat customers.

The average-sized shearing shed could be completely cleaned out in a day, but on the job there were always issues that needed to be taken into account.

Mr Welling said most shearing sheds only had one access point large enough to get the machine in a position to do the job - though they had extension lengths for the pipes if they needed to reach further.

Mr Spice said the biggest concern was snakes and he always went in prepared just in case.

"I've had run-ins with dugites and one 3-4 metre king brown that wandered into the shed," Mr Spice said.

There's also issues with unwanted materials being sucked up the vacuum cleaner pipes and puncturing the pipes or blocking the system.

"We also have to keep an eye out for shearing implements because they can wreck the pipes," Mr Spice said.

"Also wool and wire and other bits and pieces can clog up the pipes.

"The only way to clear it out is to shut the machine down and do it by hand."

Mr Welling said every shed was different and provided its own challenge.

He said some sheds had stumps that had rotted out and no one knew until the manure was removed from around it.

"We've had it where the poo is holding up the floor," Mr Spice said.

"It was so thick and compacted.

"We've had to get the farmer to prop it up temporarily while we finish the job.

"It can be dangerous but that's part of the job and you learn to watch out for those things.

"The worst shed I've done was in a valley and all the water and runoff washed into the bottom of the shed making it impossible to suck up the manure," Mr Welling said.

"We got it done but we had to break it down and that took a long time."

Mr Welling said the machine runs all day, five days a week and can be quite noisy at times.

"We put headphones on and listen to music to pass the time and drown out the noise," he said.

The machine works by sucking the manure through the pipes and into a holding tank until it is full, at which time it is released into a pile.

The system is then reset so it can continue sucking.

Once the pile is large enough the manure can be removed for spreading on the farm or garden.

Mr Arundel said farmers usually like to spread the manure out on the paddocks as fertiliser.

Mr Spice said, while he was a skilled glazier, he was glad to have a job that paid the bills.

"You have to expect getting dirty and smelly doing the job because all day, every day we are dealing with waste," he said.

"Sometimes we go home stinking so bad, but you kind of get used to it."

Mr Spice said it was fine working under the shed after the eyes had adjusted to the light because there were generally no flies under there.

"It's amazing what you find under there," he said, especially under sheds that haven't been cleaned out for long periods of time."